Return of the Dreaded Marketplaces, or the Maturing of a ‘Networked Economy’? 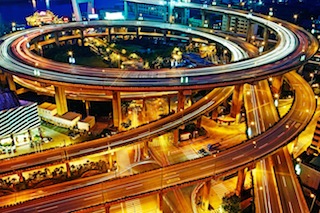 For those of us ‘grey haired’ or ‘bald’ enough to have witnessed the dot-com boom and bust days of the late 1990s and the early 2000s, the word ‘Marketplaces’ (or ‘Exchanges’, as they were also known) brings up an acute sense of ‘deja vu’. It brings up the vision of those heady days in the late 90s when the B2B marketplaces were sprouting up by the day, with promises of untold and unimagined riches and prosperity. It also brings up visions of the bust days when they fell like pack of cards having failed to attract customer participation, their costs far outstripping revenue and the resultant withdrawal of venture funds. The hard facts tell a compelling story. From more than 2500 B2B Marketplaces at the height of the dot-com era in 1999, the numbers fell sharply to only over 200 survivors by 2004.

It is probably only natural for many to ask the question – ‘So what is going to be different now? How would the “Network’ enabled by the SAP-Ariba combination make any difference? The answer to these questions lie in understanding the structural differences between the ‘then’ and ‘now’ of business networks; the transformation that the B2B space has undergone under the aegis of globalization and virtualization of supply chains.

The ‘marketplaces’ of late 1990s were ahead of their times. An idea that seemed good but lacked the ecosystem maturity (outsourcing was still an evolving concept in the 90s), and the support infrastructure (standardized process and systems integration architecture that enabled participant interactions). Barriers to entry and exit into these public marketplaces were very low, while the costs of participating in the exchanges were very high (in terms of managing the enormous heterogeneity of master and transactional data structures for participating companies). This resulted in low ‘business value’ from these exchanges and even lower customer ‘stickiness’.

Over the last decade business models have evolved significantly. Company value chains now are far more complex than ever, spreading across the globe and beyond the four walls of the enterprise. The initial drive for attaining cost efficiencies through labor cost arbitrage (the China phenomenon) has very effectively led to realization of both scale and scope economies for most who have embraced these principles. Leaning out of inventories, lower manufacturing and supply chain costs, ability to focus and excel on core competencies have been the resultant business benefits. However, this global and virtual (suppler and customer ecosystem) model has given rise to a much stronger need for managing information interchange within and outside a company’s four walls. Being a part of a ‘business network’ with established standards for process and system interaction with trading partners is a very attractive proposition now. Very different from the loose linkages of the public marketplaces of the yore.

I believe this is the very reason why SAP-Ariba business network is such a winner. SAP-Ariba can provide and help in transforming the business networks of today and in the future. The foundational elements are already in place; market need to collaborate, Ariba’s network presence and SAP’s enterprise reach and standardized technology platform. Ariba is a leader in the business network software space with more than 730,000 companies in its network, connecting and automating more than $319 billion of consumer transactions across the world. On the SAP side, 63% of world’s transaction revenue is touching the SAP systems through SAP’s global customer base of more than 190,000 customers. SAP today is the technology platform of choice for leading companies.