Does Analytics Make Us Smart or Stupid? 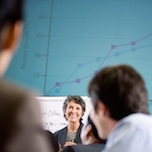 As a youth I lived in a strict house, where television viewing was restricted to one-half hour per day (or a full hour for PBS programs). The reasoning was simple: television makes people stupid, whether by its predictably banal content, endless emissions of crass noise, inducing of lethargy, or exposure to cathode rays. Yet there is little evidence that television has much to do with causing smart or stupid. On the contrary, the eminent media theorist Marshall McLuhan demonstrated that television is a remarkable technology that, unlike any other, documents the world with great fidelity as well as shapes it.

Big data and analytics is possibly the only technology to emerge recently that rivals television’s ability to capture the world so thoroughly and panoramically, while simultaneously shaping it. Even as its scope and potential are still unfolding, McLuhan gives us an uncannily useful way to make sense of analytics, and to know what to expect.

“You know nothing of my work”

Make mention of McLuhan and you will often encounter strong opinions of his work, and sometimes of his character. Laboring in obscurity for many years, McLuhan became a pop-culture icon in the 1960’s and 1970’s through his rigorous analysis of contemporary mass media. Simultaneously panned and adored, his concepts of the medium is the message, global village, and hot and cool media are as widely quoted as they are misunderstood.

McLuhan was closely associated with the uneasy breaking down of the demarcation between high and pop culture, and thereby suffered numerous attacks on his reputation, ranging from characterization as a pretentious crank throughout his career, to a mercenary during his years of fame. His unique style was often dismissed as gonzo, and his wry cameo in Annie Hall confirmed what many thought they already knew about him.

After his death in 1980, McLuhan’s work descended into obscurity, failing to find widespread favor among fellow academics. Yet fortunately that is changing, as philosophers such as Graham Harman make a compelling case for reevaluating McLuhan’s work, particularly the tetrad of media effects. As we shall see, McLuhan’s tetrad applies far beyond popular media, challenging our notions of smart and stupid, and painting an exquisite picture of a world transformed by analytics.

Finally, a 2×2 table that is actually useful

McLuhan’s tetrad describes a set of four interacting effects that all technologies exert on their users and environments. The tetrad is presented inventively as a 2×2 table turned inside out (diagram). Briefly, the four effects are:

Rather than attempt an elaborated description of these effects, two classic examples might be more illustrative: cars and computers.

Cars enhance speed and mobility, but also privacy, as mobility no longer depends on others to make it feasible or safe. Thus, cars make obsolete the horse economy, including livery stables, wheelwrights, Stanhope manufacturing, muleteers, and coachmen. Cars retrieve the knight’s honor code of not backing down from a challenge by an equal, which partially explains aggressive driving behavior. And excessive use of cars has reversed the benefits it originally enhanced. Gridlock, traffic jams, and scarce parking all reverse the freedom of movement cars once enabled, a fact noted by the motorcyclist term for car drivers, “cagers.”

Computers enhance calculation, computation speed, and information access. They make obsolete all kinds of manual and administrative labor, along with certain kinds of media storage locations such as libraries. Computers have retrieved the mythologizing of numbers, attribution of mystical powers to mathematics, and cultivation of esoteric knowledge. The close association of computers with role-playing and fantasy gaming is a manifestation of such retrieval. Finally, computers reverse the order of events from sequential to simultaneous. For computer users, time is distorted such that “it is always now,” and activities become project-driven rather than time-driven. And as is all-too familiar, computers demand attention rather than freeing it up.

As these examples demonstrate, technology does not make us smart or stupid. But it does change what we regard as smart and stupid, sometimes with discomforting suddenness.

So what will analytics do to us?

Making us smarter about being smart (Enhancement)

Perhaps the most obvious effect of analytics is its enhancement of computation ability. Supercomputing power has been transferred from building-sized behemoths in elite laboratories, to boxes on desktops, to mobile devices carried in pockets. Analytics has also enhanced working memory, by increasing the amount of current information that can be stored in an easily retrievable place, which in turn allows its human users greater chunking, or clustering of pieces of knowledge around central themes.

One of the limitations of pre-digital television was costly storage of programming content, which forced studios to discard recordings that at the time were judged lacking enduring significance. As a result, novelty game shows such as The Magnificent Marble Machine have been almost entirely lost, along with soap operas, and early sporting events. Though perhaps of dubious cultural value, such recordings are of incalculable value as archival documents into which the mind and soul of the times are preserved. Analytics combined with cheap storage make the need to discard data due to storage constraints obsolete. However, searching large amounts of data stored on servers is not like searching for books in a bookstore. Analytics requires deliberate inquiry, and so serendipitous discovery also becomes obsolete.

A likely casualty is strategic management, which attempts to map out the best course of action while factoring in constraints. Classic business strategy (e.g., the five forces) is especially vulnerable to losing the relevance it accumulated over several decades. With access to comprehensive data sets and an ability to leave no stone unturned, execution becomes the most troublesome business uncertainty. Successful adaptation to changing conditions will drive competitive advantage more than superior planning. While not disappearing altogether, strategy is likely to combine with execution to become a single business function.

Seasons in the sun, brought back for another season (Retrieval)

The Age of Science has made knowledge something that can be cultivated. However, as data proliferates into petabytes, fields of knowledge become too large to cultivate, and our ability to reap becomes proportionally smaller. Analytics therefore will likely become driven more by short- term resource needs rather than long term-planning. Thus analytics moves business professionals away from being cultivators, and retrieves the hunter-gatherer behaviors of our ancestors. We will become data hunters rather than data farmers.

Just as hunter-gatherers often lived in environments of natural abundance, businesses may have an abundance of data. But insight and action will likely proceed according to data availability, which may be migratory, periodic, and seasonal. In extreme cases, the environment may inhibit gathering data, in which case insight could become a feast or famine condition. Business activity may follow entirely new cycles rather than traditional business cycles, with perhaps less adherence to quarterly periods and more to seasons when the business environment is most fertile.

Analytics will also retrieve what historian Richard Hofstadter described as the anti-intellectual businessman, where management decisions are resolutely theory free. Instead of academic management theories and classic business cases, decisions and action will be informed increasingly by manager acculturation and practical knowledge. Motivated by pragmatism, managers will preside over an execution-driven business, as opportunities will become framed by the data and solutions that are immediately available.

Too many cars overload highways and create smog. Similarly, too much data and analytics create cognitive overload and data smog, both of which put great stress on our ability to keep our bearings. As our ability to manage cognitive overload decreases, business phenomena increasingly appear less rational, and we experience a reversal from higher order thinking skills to an orientation to recognizing organic shapes and patterns.

Much like our hunter-gatherer ancestors struggling to survive on the savanna, our preoccupation reverts to mesoscopic phenomena (i.e., size of an animal) that might be hiding in the bushes, rather than the microscopic/macroscopic phenomena (e.g., atoms and space) that we conquered through science. The need for sense making becomes immediate, and we will tend to deal with events through storytelling, ritualizing, superstition, and attributions to irrational forces.

While psychologically too much data reverses our rational behavior, organizationally it produces increasingly rigid rational control. Organizational activity becomes directed by algorithms, characterized less by judgment and more by reaction. An example is zero tolerance policy in law enforcement or school discipline. Likewise, the core of organizational culture becomes algorithms rather than values. Decision making autonomy is reduced, as jobs and business functions come to resemble computer applications. Consequently organizations become structured like a servomechanism aiming to maintain a steady state, reversing the flat, collaborative organizations developed over the past few decades.

So, does any of this sound even slightly abhorrent?

McLuhan would be pleased. When encountering disagreement, McLuhan often responded puckishly, “You don’t like those ideas? I’ve got others.” Indeed, such sentiment applies here as well, as the four effects McLuhan described are by no means deterministic. Like television, cars, or computers, the effects of analytics are influenced by the innovative people who use it. Analytics can make us smart by helping us look into the future and adapt to it, or stupid by leading us to think it must unfold in only one way.