I was invited by Marilyn Pratt to attend a workshop on ‘Practicing Empathy to Derive Insights for Novel Solutions’. The event was well organized and speakers were good to be listened. I strongly feel that anyone speaking on topics related to empathy should themselves feel the topic while speaking about it; else there would not be an impact on the audience.

After a short introduction of speakers by Marilyn, the event was kicked off by Dr. Sam Yen. It was interesting to know the way concept of design thinking began in SAP. It highlights the importance of ‘Being at the right place at the right time’. 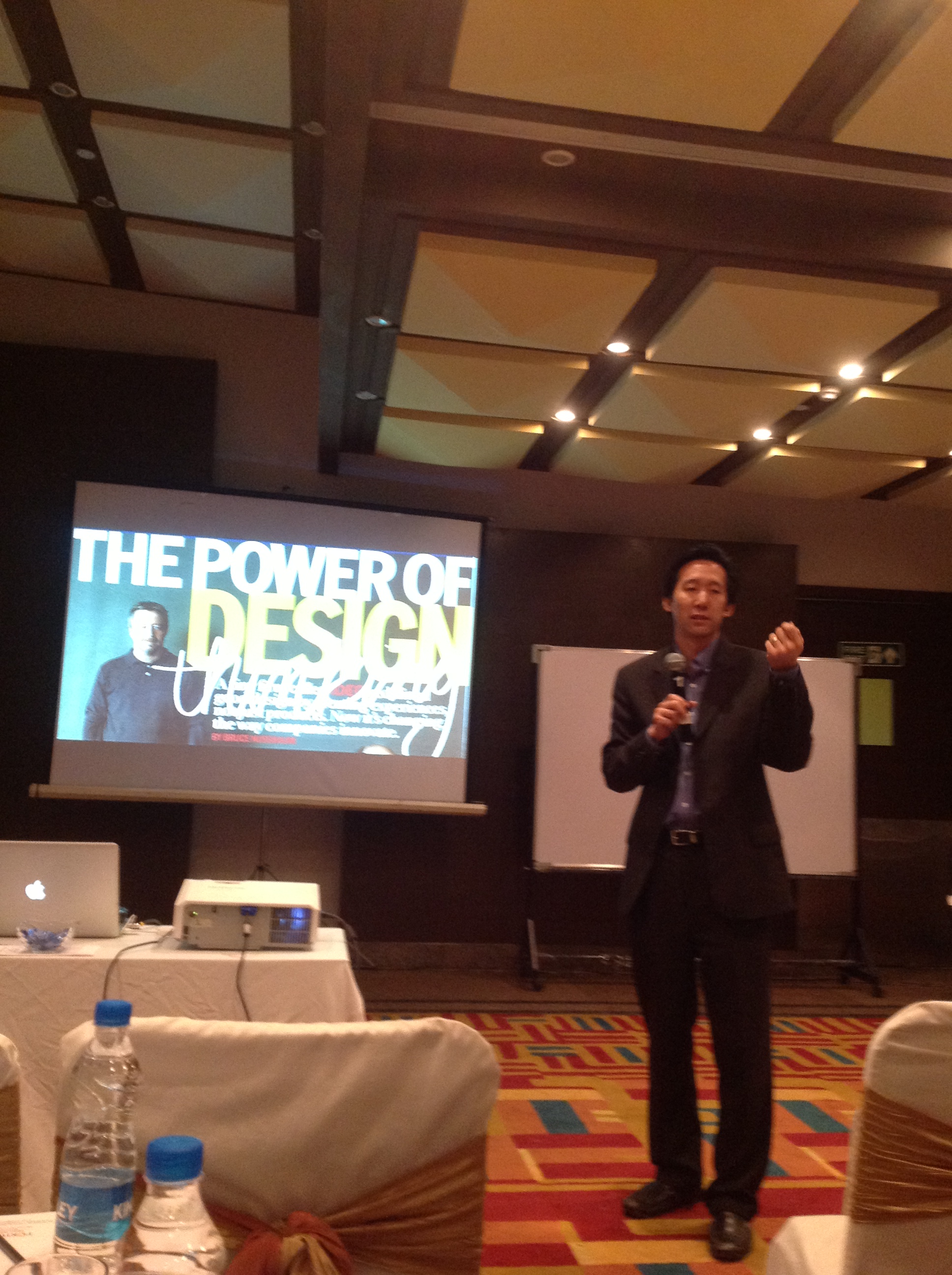 Stage was then taken over by the guest speaker, Seung Chan Lim who spoke about practicing empathy with real time examples. He talked about four dimensions of Empathic conversation which includes Respecting, Listening, Considering and Acting. 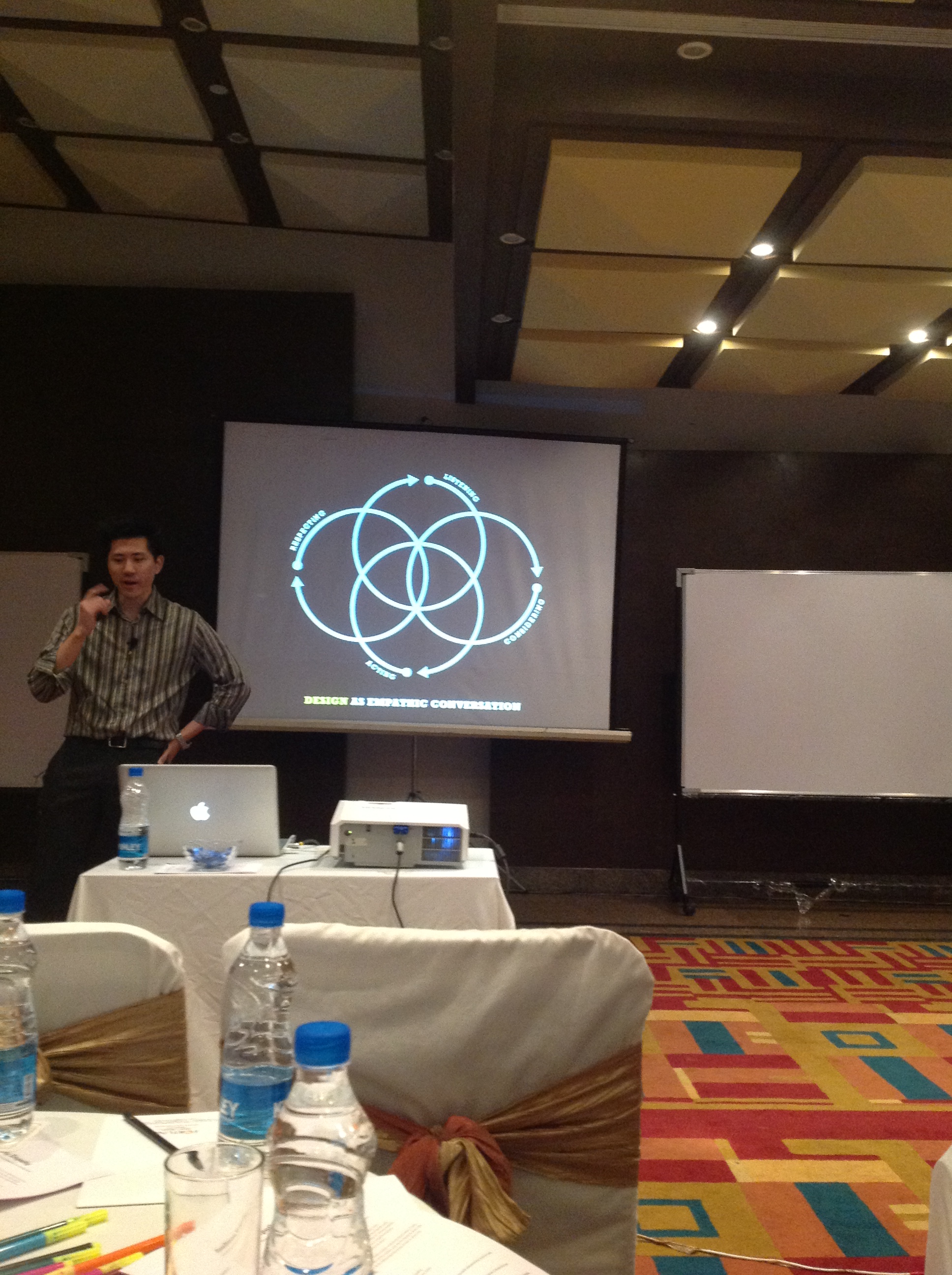 According to me the crux was, empathy begins with the right way of conversation and with an open mind-set. He emphasized on the fact that most of us are bound by our own prejudices, bias and hence are not open to empathic conversation. This is an interesting fact but it is true and very difficult to be bypassed. Let’s say we initiated a conversation with a person enthusiastically and did not get the same response back. It is natural that we will get prejudiced towards similar persons or in a broader way persons belonging to same culture. One certainly does not want to get hurt repeatedly.

While talking about first aspect ‘Respecting’ he gave an example wherein a glass can be melted and given different shapes but can never be torn. By this he meant we find difficulty in accepting other person as we expect them to be same as, we want them to be. The other person has to be respected the way he is. Again if I correlate with real life examples, it would be very difficult for me to initiate a conversation with someone else if I don’t expect him to be same. What if the person says ‘Do I know you’? I feel this aspect is contextual and need based but certainly not generic.

While talking about second aspect ‘Listening’, Lim gave an interesting example. Once when he was cutting a piece of wood, it was causing a lot of noise and his teacher asked him to ‘Listen to the wood’. He found out that he was cutting the wood at a wrong angle and hence a lot of noise. He rectified it and things were smooth. My ABAPer mind thanked me as I have ‘listened to the code’ by coding using OOPs and not procedural language. I understand that we have to listen to the other person and just not hear him. But then again, it also depends on the state of my mind and how close I am with the other person. Let’s say I am very happy and the other person has a sad story to say, I am sure I would not be able to empathize with the person and similar will be the case if I am not close with the person. Lim said that people always don’t mean what they say. That’s correct; I may console a person without empathizing with him.

Again I strongly feel that this aspect is contextual and need based. I also recently learned that culture too has an impact. I had a short conversation with Lim and he too agreed that culture impacts empathic conversation. One may say ‘It’s great to see you’ without meaning it at all.

Likewise Lim talked about the other two aspects of empathic conversation – Considering and Acting with good stories. He successfully highlighted that results are effective following an empathic conversation. If I correlate it with SDLC, I can clearly understand that empathic conversation are very much needed in requirements gathering phase. But at the same time there are many constraints that needs to be addressed. As a developer, I many times feel that there exists another better approach or there needs to be more practicality added in the code than is mentioned in functional specification. But I cannot always address them as I have to look into timelines and also what is the exact expectation. This further highlights that it is mandatory for a developer to know how and where is his/her code getting used in real world. Ideally, empathic conversation can lead to effective results provided this approach is respected and accepted by all the parties involved.

It is also very important to notice that empathy cannot be taught. One has to be willing and determined to learn it and gain it with experience. It reminds me of author Marcus Buckingham when he says “A pessimist cannot be turned into optimist with training but can only be made less pessimist. There are few qualities which comes by birth”.  I also feel empathic conversations are need based.

After Lim, Hester Hilbrecht took over the stage and she effectively talked about design thinking approach. 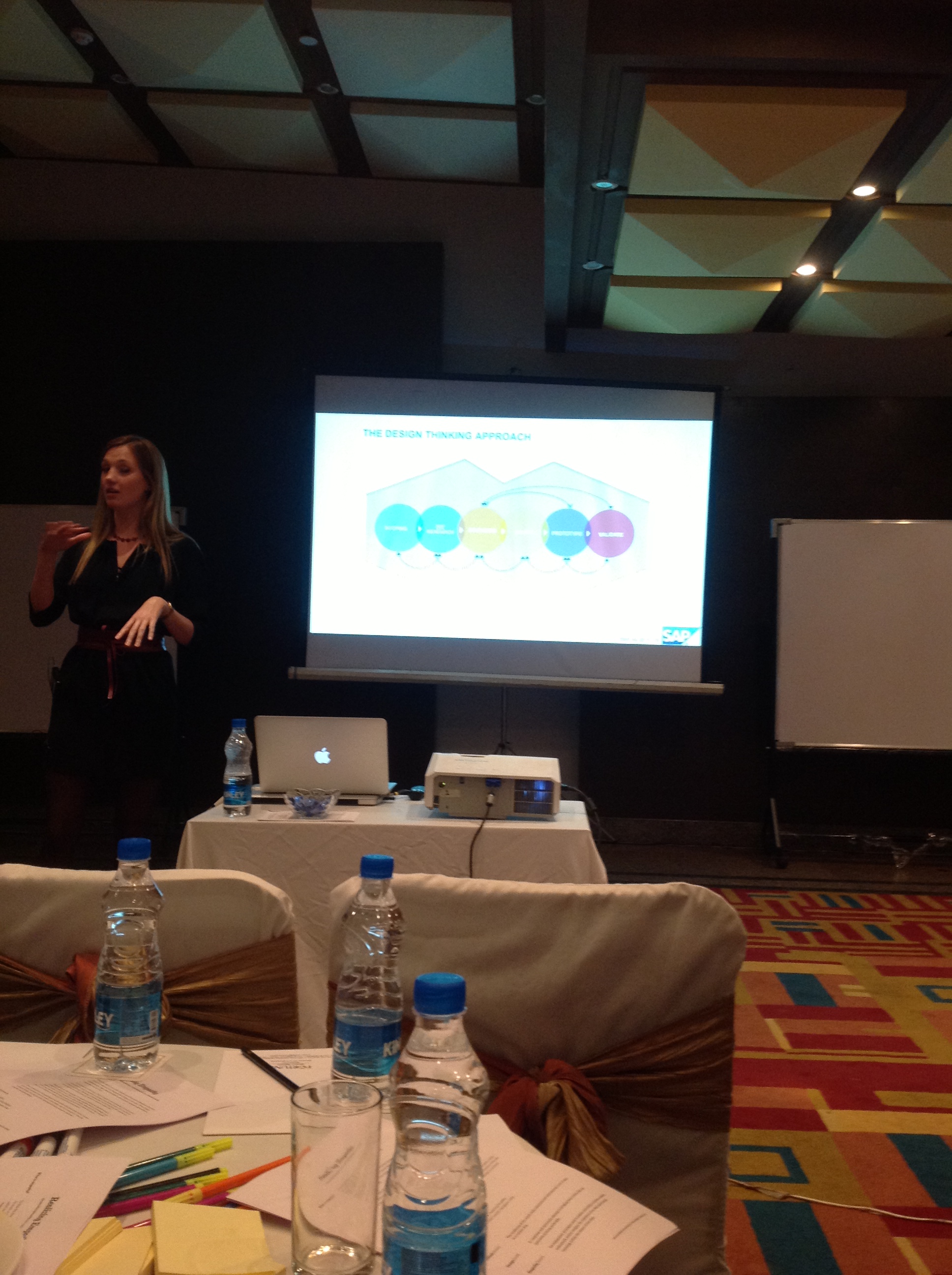 There was a workshop session by Lakshman in which the participants were grouped with another participant whom they did not know before. Due to timing constraint we were asked to have a quick empathic coversation with our partners. When Lakshman said ‘Be empathic for next ten minutes’, it sounded to me like ‘Be innovative in next ten minutes’ or if I put it in TechEd words ‘Innovate like never before’ 🙂 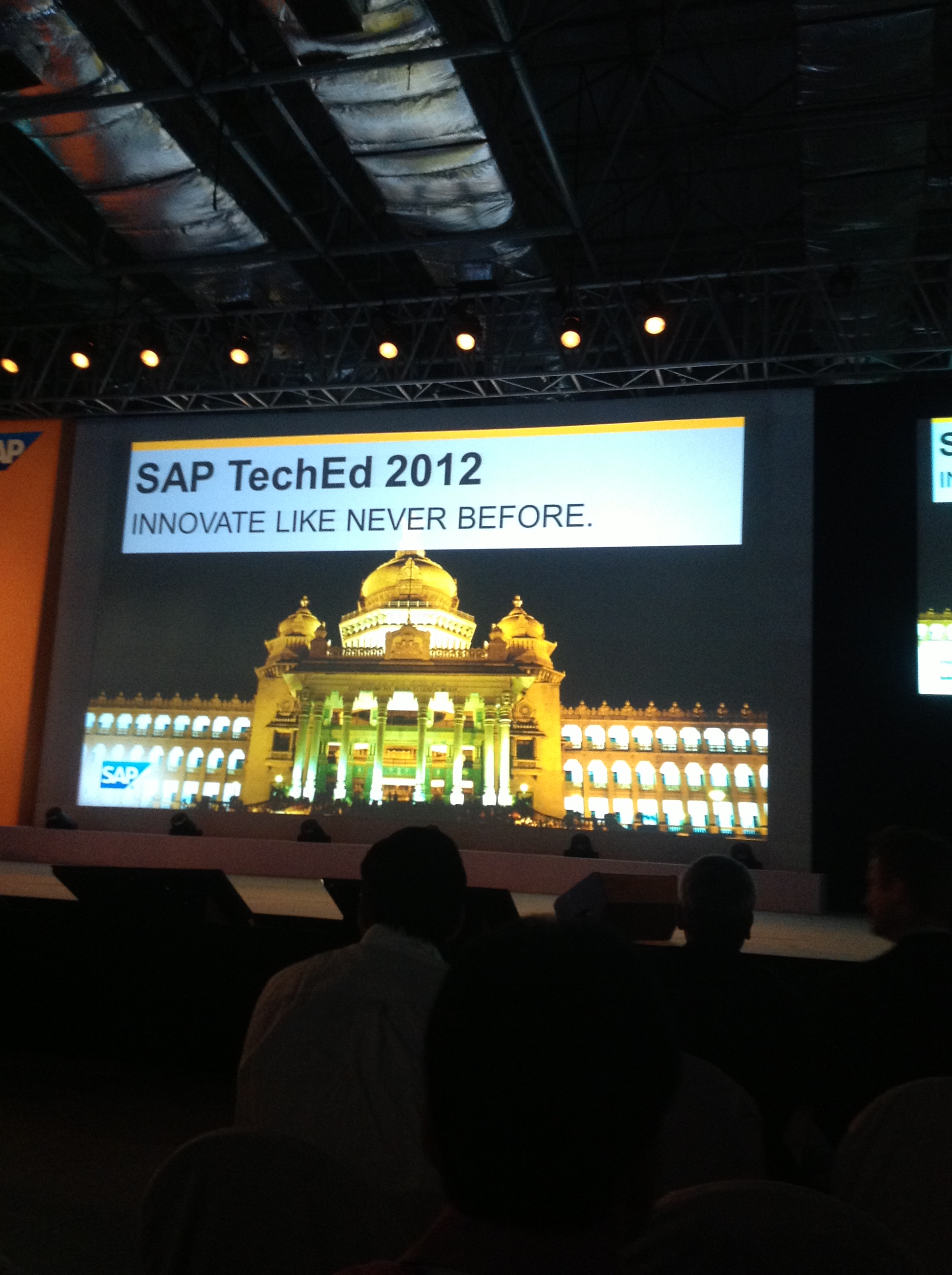 Activity was to talk with other person and also see his wallet. I could not much understand the significance of observing the wallet until the end. After observing the wallet and a conversation with the partners, participants were asked to present something back to their partners. It was almost astonishing for me to realize that few of the person characteristics could be guessed based on his/her wallet. After observing my wallet, my partner said that I am very practical and organized which is very true. I said that with his wallet I could see that he is very optimistic person which he completely agreed. Different teams came up with different types of high-tech, multipurpose wallets for their partners. Sentiment-analysis was an interesting term used by one of the teams. The crux was, the type of wallet gifted to the partners was a result of how well we understood them in the conversation session. The better the conversation, more effective the outcome was. Lakshman was very particular about timing constraints and caused a banging sound effect to remind us of the same. At the end we were asked to post what we liked about thesession and what we wished could have been included in the session. I liked the workshop activity and wished we could have been shown some examples where design thinking was part of a product and how it added to the value of the product.

Even after putting my thoughts together, I am not sure if I completely understand the concept of empathic conversation as I feel that this topic is huge and multi-dimensional. These are completely my thoughts. It was also interesting to see that design thinking was part of every keynote session delivered at TechEd Bangalore. After reading this blog if you have any further questions I would suggest you to add a comment to this blog or contact Marilyn Pratt 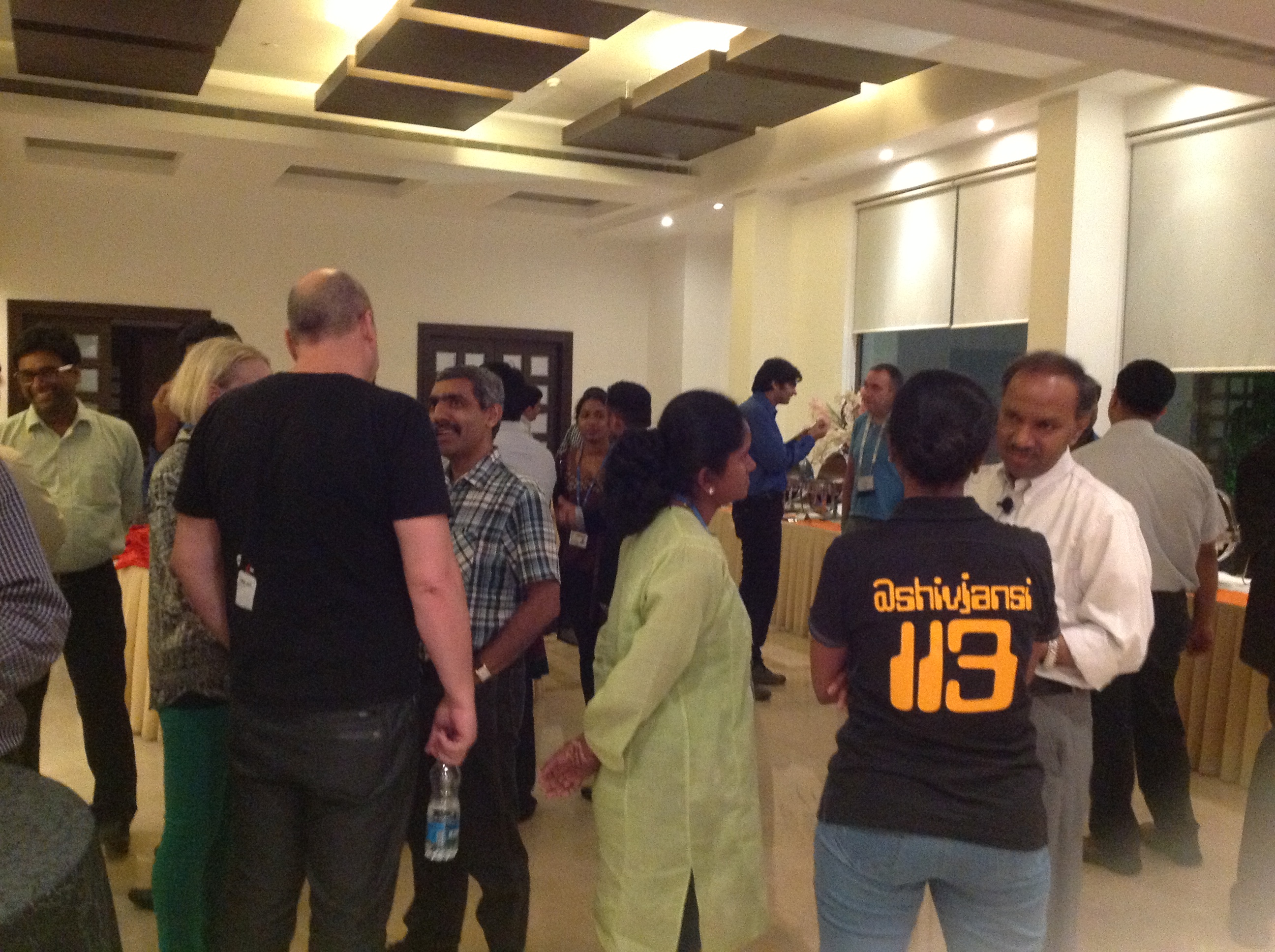 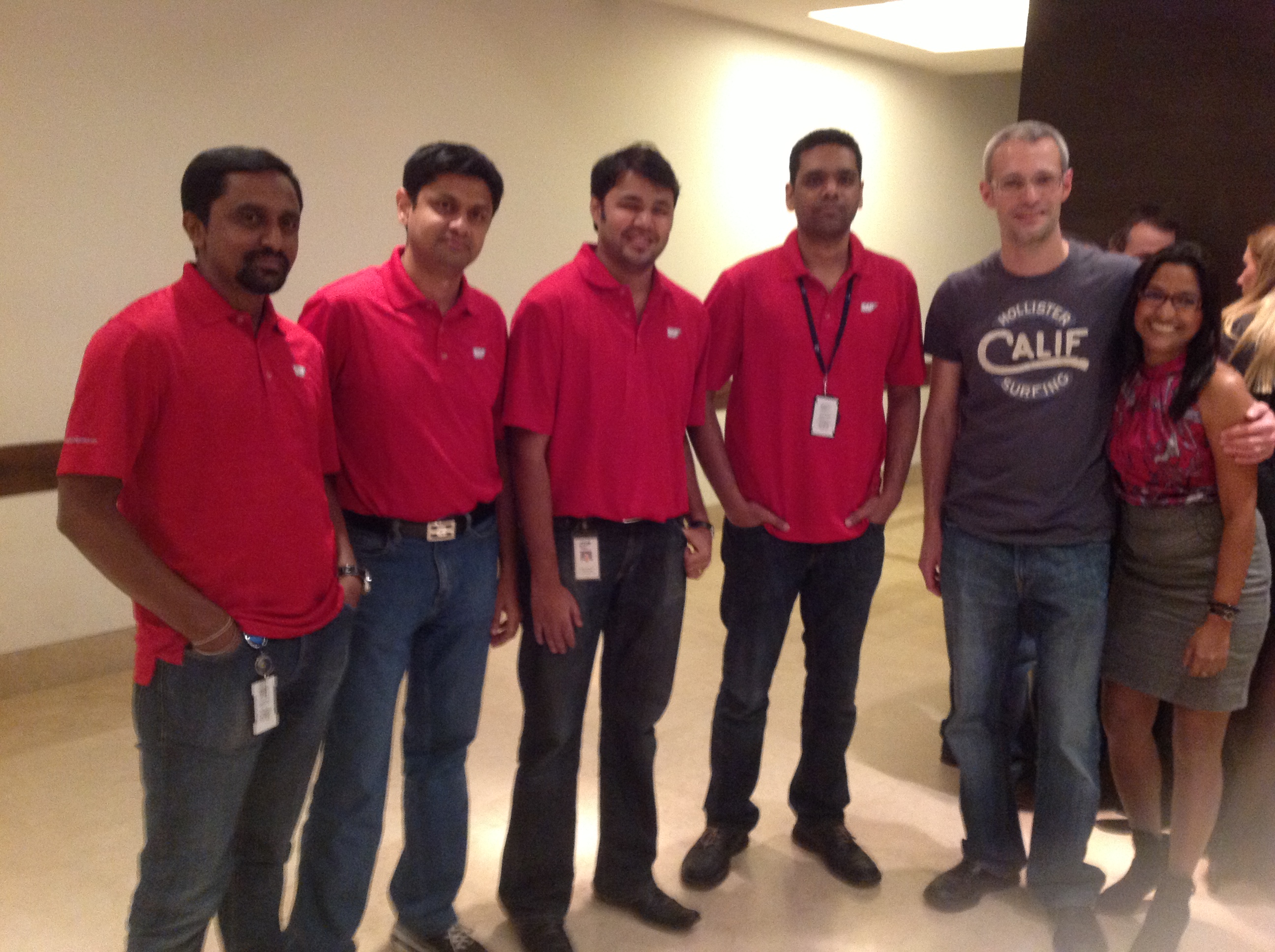 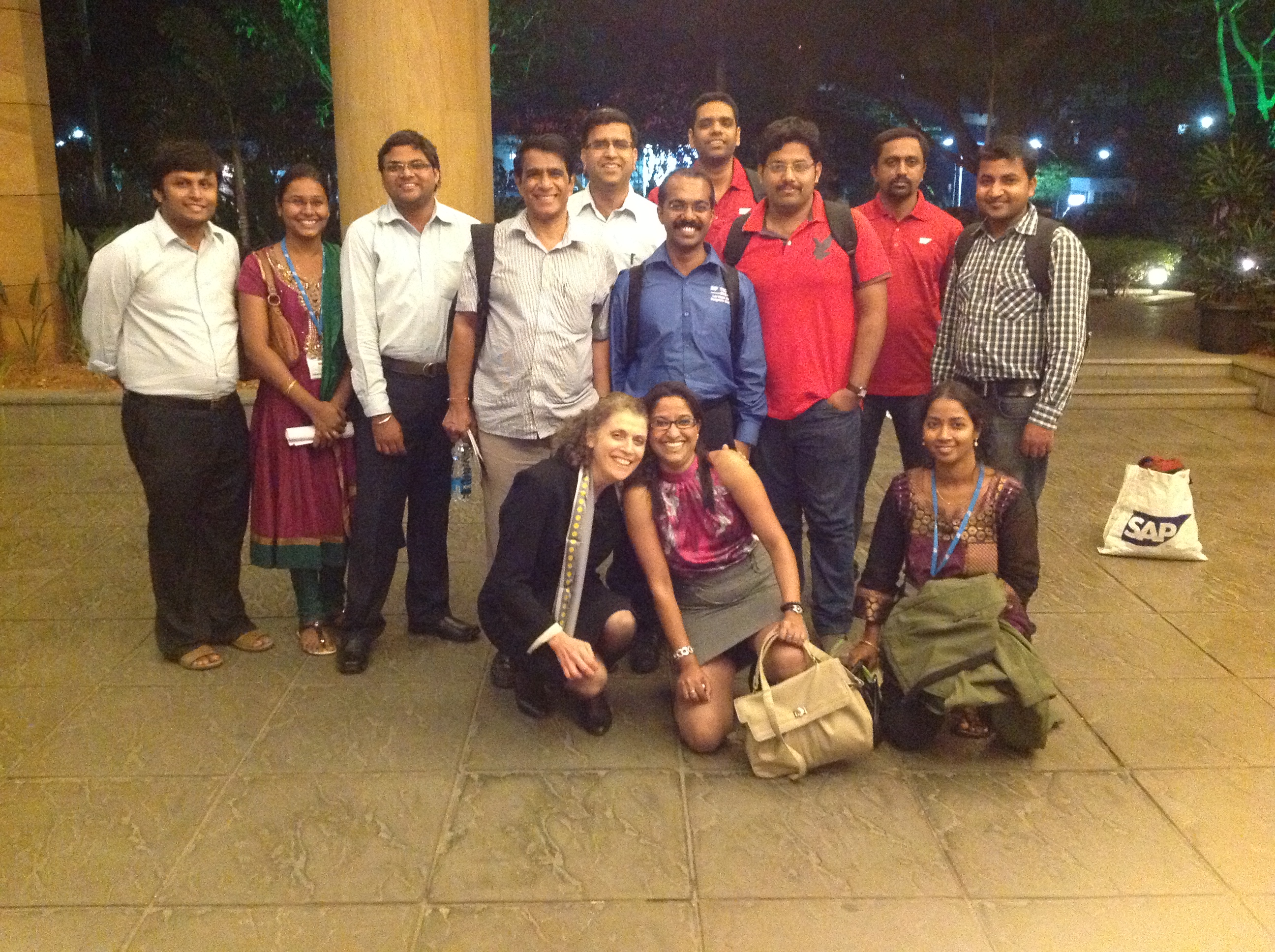 Thank you for taking the time to write this up - I felt like I was there with you in the workshop.

Thank You Tammy and Fred for the encouraging words!

Thanks for summarizing, unfortunately I missed the sessions 🙁 on Design Thinking with Empathy.

Thanks Kumar, see you next time!

Just landed back from B'lore and what a welcome surprise and pleasure  your post because it is so detailed and rich and thoughtful.  Of course the DT workshop was just "a teaser" ( a small taste of how one can apply some of the empathic conversation skills to derive insights ). It was my first real experience with being a full participant and I found the journey amazing.  Some of my insights were these:

In short, practicing empathy to derive insights for novel solutions is indeed what many of us DID in the workshop.  Remember :

A huge thanks to all who participated.  Met and engaged with many new folks but it was great to have "vetern friends and community" Mrinal Wadhwa  Muthu Ranganathan John Patterson Paul Hawking and his wife Sue, Matthias Steiner Craig Cmehil Mark Finnern  just to name a very few who were in the room of 60+ people and of course the inimitableLakshman Pachineela Seshadri

Thanks Kumud Singh for getting this up and posted and shared so quickly.  I have a clip of Seung Chan Lim which I must post as well!

Thank You Marilyn for sharing your insights and also for inviting me for the workshop. It's always great!

Great recap Kumud! (Was great finally getting to know you in person...)

Thanks Matthias! As you could see I was very happy to meet you as well!

Good to see you again in this TechEd, and for your nice lucid blog. After a hectic and long working day, all of you came in with renewed energy.  We started the session around 7.15 pm, (delayed start with traffic inside and outside the Fortune Hotel), I could see the positive energy in all of you brimming with curiosity of what is coming next?

Your enthusiasm and energy made the event more exciting.  At 11 pm, some of you came back to tell, 'I wish we had more time to carry on' with the excitement.  Time-boxing is a norm and critical to Design Thinking and we always have constraints. Some of the constraints help us become more innovative. Hope you/we will be able to take this further in your/our lives in our family, community and professional environment?

Thanks to Marilyn for getting Slim down here to Bangalore.  Slim's talk was a great prelude to the workshop.  Only for the select audience like you participants.   Hester's Deutsche army project insights - is that possible without deep empathy?

In every DT workshop, I am learning something new!

Please do reach out to me for any inputs or support.

Thanks Lakshman. It's always great to meet you in design thinking workshops as you have always something new to share. Thanks for being so patient and creative at the workshops.

Well written, and well observed, first aspect 'Respecting and second aspect 'Listening', thanks again for writing this up.

Hi Kumud, what a great review and lots of cool pictures! I was at InnoJam Madrid and the whole Design Thinking concept is very relevant but often overlooked in business.

The concept of empathic conversation links to something I was taught in basic sales training many years ago, we have 2 ears and 1 mouth so listen twice as much as you speak!

what a fantastic blog! I just mentioned this blog in my blog about DT 🙂

Your experience was different from mine, the activities were different, but we share some thoughts and feelings, and we both have ABAPer minds 😉 .

Best regards and looking forward to meeting you some day.