This week witnessed the demise of a classic US icon when Hostess Brands announced that it is asking a federal bankruptcy court for permission to cease operations. The company will shut 33 bakeries, 565 distribution centers and 570 outlet stores laying off about 18,500 workers. Hostess blames the decision on the baker’s union strike and their refusal to accept a new deal that would have reduced some of their employees’ salaries to $25,000 a year from their current $34,000. In 2005, such employees were making $48,000.

While much of the media coverage centers around the loss of Twinkies, the spongy, goo-filled treats, an object of nostalgia among baby boomers who probably haven’t purchased one in decades, infamous for the so-called Twinkie Defense in the trial of defendant Dan White for the killing of San Francisco city supervisor Harvey Milk and mayor George Moscone, I want to look at another brand in the Hostess portfolio presumably doomed to oblivion, Wonder Bread. 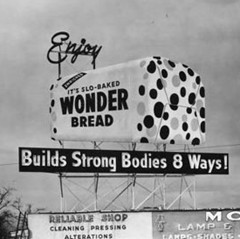 The Wonder Bread logo has been updated a number of times over the years, with varying degrees of success, but hasn’t departed from it 1921 iteration with its primary-colored dots. It was said to be inspired by the view of the International Balloon Race in Indianapolis in 1921 by Elmer Cline, vice president for merchandising development of Taggart Baking Company, who was filled with “wonder” at the scene of hundreds of hot air balloons filling the sky. The logo was designed by Drew Miller; a Chicago ad agency designer.

This was a perfect representation of burgeoning factory bread. Wonder Bread was indeed a work of art. A simple modernist form, unmarred by imperfections and the hand of its creator, infinitely reproducible, each loaf perfect, a celebration of the machine age. An instantiation of the 11th section Marinetti’s Manifesto of Futurism:

“. . .we will sing of the vibrant nightly fervor of arsenals and shipyards blazing with violent electric moons; greedy railway stations that devour smoke-plumed serpents; factories hung on clouds by the crooked lines of their smoke; bridges that stride the rivers like giant gymnasts, flashing in the sun with a glitter of knives; adventurous steamers that sniff the horizon; deep-chested locomotives whose wheels paw the tracks like the hooves of enormous steel horses bridled by tubing; and the sleek flight of planes whose propellers chatter in the wind like banners and seem to cheer like an enthusiastic crowd.”

The only creation worth celebrating is that of the modern factory, the only beauty is speed and efficiency. One can imagine how Marinetti would have would have reveled in it being one of the first to market with sliced bread, lusting in the violence of the factory slicers as they silently and surgically did their work.

The Wonder Bread logo has always been a testimony to this sense of modernism. There is no reference to home and hearth. There are no depictions of sheaves of wheat, no artisans pulling loaves from a wood-fed oven, no hand-written script, no Earth tones, no hand crafting whatsoever. The color palette is as modernist as it could be, reduced to the primary colors from which all other colors spring, Red, Blue and Yellow with a generous dose of clean, hygienic white. The forms are primary circles, perfect shapes. It’s as if the designer of the logo had insight into the modernist theories of Piet Mondrian and the De Stijl movement with it’s quest for perfection and harmony through abstraction and a reduction of form and color to its most primary expressions. Except not quite as harsh, still allowing for a bit of randomness, perhaps playfulness, still reflecting the technology of hot air balloons as they align themselves with the meteorological conditions of the atmosphere on that day of the balloon races in Indianapolis. 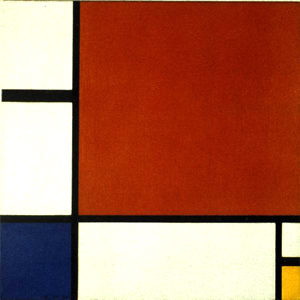 Despite the recent news, in all likelihood Hostess and its brands will endure. The judge presiding over the bankruptcy case has ordered the parties to try mediation in a last minute effort to provide a reconciliation that would avert the disappearance of the brands. If that should fail, it is unimaginable that another company wouldn’t buy the brands from the parent company given their heritage, recognition and equity. Already, various concerns are lining up to do just that. Wonder Bread may yet see its colorful balloons rise again. Call it a testimony to the strength and value of brands in our everyday lives.

Of couse, there is more to this story than the endurance of a brand and its logo. These colorful dots represent the ethos of modernism, and more. On the day before his death in 1968, Martin Luther King called for a boycott on Wonder Bread for its labor practices. In 2012, the Wonder Bread logo continues to tell a labor story.