A Disturbance in the Force: The impact of NetWeaver Cloud’s planned “Mobile as a Service” on other SAP offerings

In a session at the recent Sapphire in Madrid, Executive Vice President SAP NetWeaver Björn Goerke mentioned a new NetWeaver Cloud “Mobile as a Service” (MaaS) offering that has a considerable impact on other existing SAP offerings. 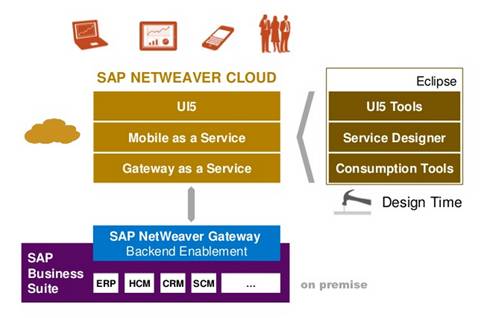 Note: Björn’s presentation came with the usual disclaimer slide exonerating SAP of any responsibility to actually implement any of this stuff but let’s just pretend that they will actually do it.

A Caveat: There is actually very little additional information available for the new offering so I have absolutely no further details regarding what the service really contains.  But this ignorance also provides me with a certain degree of flexibility in my exploration.

Mobile as a Service: Introduction

Fellow mentor John Moy thankfully has provided a useful diagram that demonstrates that SAP already has a rather extensive mobility platform (SAP Mobile Platform: SMP) that encompasses a variety of products.

Into this already complicated picture, the new Mobile as a Service enters. From my understanding, the MaaS is planned for more lightweight mobile apps – more complicated apps (for example, many of those based on Syclo) would remain in the existing platform.

Sam Yen has recently been given the task of giving SAP’s UI strategy a facelift and in a recent ASUG article describes the various steps he is taking to achieve these goals.  An exploration of possible usage scenarios with MaaS to fulfill certain UX-related goals provides additional insights into this new mobile offering.

One facet of Sam’s strategy in particular is of interest.

Yen and his team are focusing on the 15 to 30 transactions that are most widely used by users in the install base–for instance, approval workflow processes such as leave approval and time-sheeting.

Yen knows focusing here is a double-edged sword. On the plus side, approval workflows, for instance, aren’t processes that differentiate a company. For the most part, how an employee inputs vacation and how a manger approves it isn’t really all that different from one customer to another. This will allow the solutions his team comes up to be more easily productized.

On the other hand, because they aren’t “competitive” processes, the IT team may have a hard time convincing the brass that these are processes worth investing time and money in making more usable.

Note:  It is important to note that these applications are distinct from the Personas server.

Although not directly mentioned, ideally these applications would be mobile applications. Despite the possible high frequency of their use, it might be difficult to create a business case for the additional OnPremise infrastructure – either SUP- or Gateway-based – to support these new mobile applications.

Cloud environments are also focused on standardization and the MaaS on NetWeaver Cloud also really achieves its potential by focusing on standardized applications. By bringing both efforts together you have an interesting synergy that would easily permit the applications created by Sam’s team to rapidly reach a mass audience.  Back-end integration in the new offering could be performed via the Cloud Connector.   As long as the related back-end processes are not heavily customized, then the associated costs would be relatively low.

MaaS could focus on standardized mobile apps – with little or no possibility of customization.  MaaS is an ideal platform to mobilize OnPremise assets.  My assumption is that many enterprise apps meet these requirements suggesting that the potential of MaaS is high – not only related to Sam’s efforts but other use case as well.

SAP must clarify which use cases are best appropriate for the different mobile offerings. Until this takes place, I expect some friction from other SAP organizations and uncertainty amongst customers

Gateway is often portrayed as the perfect platform for enterprises to mobilize their workforce. This appears to be in direct competition with the MaaS.  One possible distinction would to use Gateway for customer-created solutions and MaaS for standardized ones.

SAP’s mobile sales staff may view their sales opportunities as threatened by this new offering. This is especially true for those customers who wish to create an initial mobile PoC or start with just a few mobile applications. In such cases, the initial infrastructure and licensing costs for OnPremise solutions are still relatively high.  The MaaS might be more cost-effective for such efforts.

Note: It is possible to use the Sybase Unwired Platform (SUP) Developer Environments and Afaria on AWS but the entire SMP isn’t currently available there.

I would expect partners such as Cap Gemini who are participating in the Sybase Managed Mobility Platform (which is also described as a Mobility as a Service) to focus on distinguishing their offers from that of SAP.

Many of the existing SMP-related apps are focused on existing business users. MaaS might focus more on consumer-facing apps reducing the traction with other SAP organizations.

In regards to Gateway and MaaS being "direct competition"... well, at least the high-level slide at the top of your blog post suggest that there will be both MaaS and GWaaS as part of SAP NW CLoud, hence I tend to believe they would complement each other rather than directly compete.

We'll certainly share more details on both topics as we go forward - for the time being we have to accept things as they are and just take your blog post as indication that you find the roadmap exiting and that you're hungry for more...

BTW, if you want more info on MaaS (aka SAP Mobile Platform Cloud Version) you may find this SAP TechEd Live interview worthwhile:

I actually wanted to watch this video (I tweeted about it before Madrid)  but forgot about it.

What is interesting is that it doesn't mention NetWeaver Cloud at all,

Actually, MaaS and GWaaS aren't in direct competition with each other but rather with other SAP products.

You'll see the pattern when I publish  my second blog in the series which concerns GWaaS.

The relationship between SUP and MaaS is simple - we took the HTTP REST services of SUP 2.2 and made them also available in the NW cloud. That gives customers 2 deployment options: on-premise (SUP 2.2) or in the cloud (MaaS).

The target are of MaaS are light weight online apps based on HTTP REST.

There is no need to migrate from SUP to MaaS (aka SMP cloud). HTTP REST apps will run against both - onpremise and ondemand.

The pricing will be aligned with the NW cloud pricing as MaaS is sitting on top of the NW cloud.

I hope that answers some of your questions.

BTW: I added a screenshot of MaaS to my platform blog: http://scn.sap.com/community/developer-center/mobility-platform/blog/2012/11/22/sap-mobile-platform-apple-of-the-enterprise

Thanks for commenting on the blog - you've provided interesting details.

I also liked the screenshot - looks very useful. The use of Siteminder was a little bit surprising though.

I found a description of the REST functionality in the Sybase documentation:

Unwired Server provides RESTful services so that applications can be built as any standard HTTP application to leverage Unwired Server for security and push features among others. The following administrative features are provided through this development approach:

Optionally, you may use certain Sybase Unwired Platform native client libraries to enable complex application capabilities, such as OData parsing and building, or data vault management. You may also use third party JavaScript helper libraries such as those from Sencha, Appcelerator, or Adobe PhoneGap.

Will these functions be available (for example, the use of native client libraries)? How will monitoring and administration work?

Does that mean some apps listed in SAP Store will have a reference to MaaS as a deployment option?

here are the answers you asked for:

Will these functions be available (for example, the use of native client libraries)?

- yes these are the core services of SUP 2.2 also available in the cloud.

How will monitoring and administration work?

- using the MaaS admin interface in the cloud. You can find a screenshot here - towards the middle of the blog:

Does that mean some apps listed in SAP Store will have a reference to MaaS as a deployment option?

- good point, we should annotate that in the SAP Store and state which apps are running against HTTP REST vs the propriatery iMO protocol. I'll speak with the app store team once the cloud version is launched.

Thanks for the additional details.

Any idea when developers can start to experiment with the solution?  I heard that it was going to be available in Q1 2013. Is that date still correct?

I do have an idea - we are finalizing release dates right now. But you know how it is with us SAP employees, we can never give an exact date until the solution is out 🙂

So, stay tuned for the official announcement - you are in the ballpark with your estimate.

As a matter of fact, I demoed the Mobile cloud in Sanjay Poonen's keynote at SAPinsider's Enterprise Mobility conference in Oct 2012 in Las Vegas. Once the mobile cloud is released, I would love to get your feedback!

I was looking for a video on Sanjay's keynote at the SAPinsider's Enterprise Mobility conference. Do you know if there is one anywhere?

Once the mobile cloud is released, I would love to get your feedback!

Of course.  Can't wait to get my hands on it.

What, the whole Mobile Cloud? Are you going to take over the world via Smartphones? Will Dick Hirsch become the God that Lars Dalgaard worships via his iPhone? 😉

If you want to see the MaaS in action, here is a video of Sanjay Poonen 's keynote at a recent conference