SAP InnoJam – Not just for Techies!

After the fun at InnoJam Madrid 2011 I decided to sign up once again and have just returned from Madrid. I wanted to write another post detailing what our team did over the 30 hours and also to get across to people the spirit of the event and try to attract folk with different skills to get involved in this fun event.

If you don’t know, SAP InnoJam is a 30 hour non stop event where attendees get in to teams of 6 – 10 and work on a concept. The idea is formed and then developed into a working prototype which is then presented to the group and judges. The winning team(s) then get a slot at DemoJam and have to do it all again on Tuesday!

Each team was assigned a specific use case to work on, ours was Improving Public Transport, others topics were housing, parking, polling and schools. We formed our team and were assigned an SAP InnoJam Guru (each team gets a Guru to help start the project). Then came a brain storming session where each team member wrote on post it notes who they are, what they do and we got to work on ideas for a solution to our case. Once we had several concepts it was time for the interview process where we swapped team members with other teams and interviewed them about their habits around travel, what do they think of public transport? What are their pain areas and what would make them use public transport more? This was a really useful exercise and is part of the whole Design Thinking aspect of the event run by Hester Hilbrecht – I found this section to be most useful, in previous years it has been too easy to get to work building the prototype before thinking the idea through. The interview stage involved structured questioning of our subjects to really get answers and thoughts about our solution. This involved a lot of open questions with team members making full notes. One of the main points was to practice empathy for the people we were questioning and ultimately designing for. It should be customer focussed! 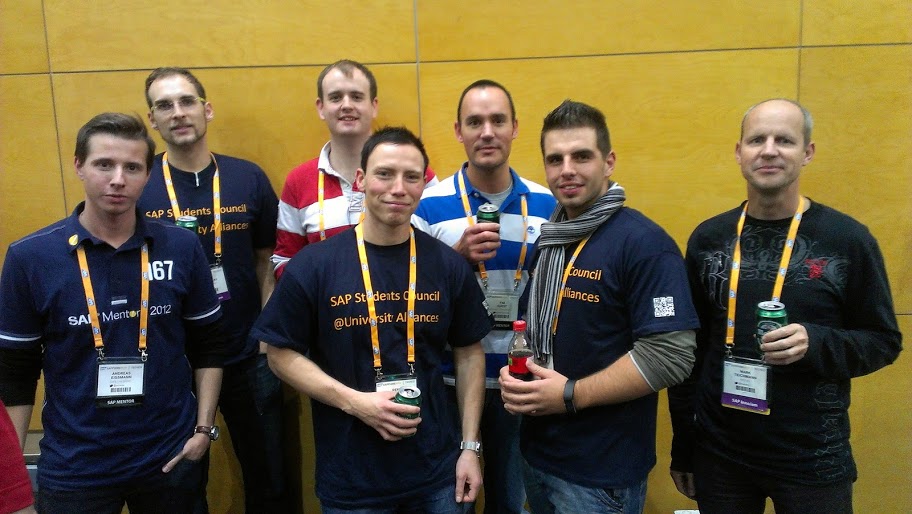 After the interview stage we met up as a team and wrote our findings on more post it notes! Then each answer was categorised and placed on the board, it was surprising to see how many similar thoughts there were on Public Transport and this stage really helped us design our concept.

We got to work drawing out how we wanted our prototype to work. An App, that lets you book travel over a number of legs of a journey in 1 hit rather than using multiple sites. It is linked to your credit card and is designed to simplify travel booking using multiple methods of transport. The Brandenburg University guys were really helpful in this stage and had some really great ideas about functionality, usability and how they wanted the UI to look. Holger was a really good artist so he started to sketch out a basic storyboard. We then presented our ideas to other teams and took their feedback on the project. Once we had finalised in our own minds and on paper how it was going to look it was time to draw it on HUGE pieces of paper and present to the group. 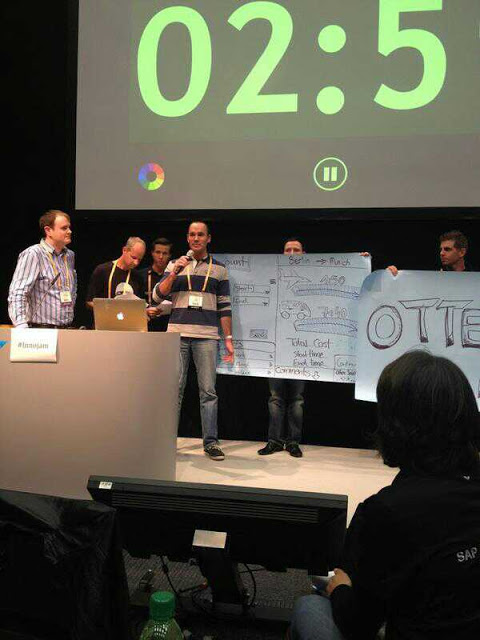 Everyone gave feedback on each others concepts and it was great to hear what others views were so we could design our App accordingly. Next we had to choose a platform to work on, we chose ByDesign as Andreas Eissman is a ByD expert. We also decided to use Windows 8 to build the App and were given a Surface Tablet and a large Windows 8 Touch Screen. Both Brenton O’Callaghan and Mark Teichmann got on with designing and building the mobile app with help from Rene and Martin from Brandenburg University while I downloaded travel data to upload via HANA Studio. We could use Netweaver Cloud, Netweaver Gateway, HANA, ByDesign, Business Objects, Blackberry and Windows OS. All the SAP solutions were accessed via Amazon Web Services which worked really well. We want to thank the Microsoft team who were on hand to help with this, I think we impressed them by using Azure in our demo!

I would like to mention the Brandenburg University guys again as they kept us going through the tough times on this project, they were full of ideas and enthusiasm and were great to work with. We were lucky enough to have several universities from the SAP University Alliance attend and I hope this continues. Thanks to Ann Rosenberg for coordinating the University involvement.

As we got deep in to the night, the App started to take shape, Brenton and Mark had started off well and Andreas was working hard on the back end which was going to provide statistics and analytics to the users. I had loads of data to upload to HANA in CSV format and most of us decided it was time for bed at about 1am. Everyone but Mark who decided to sleep on the floor so as not to waste any time coding!

Eating on the job! 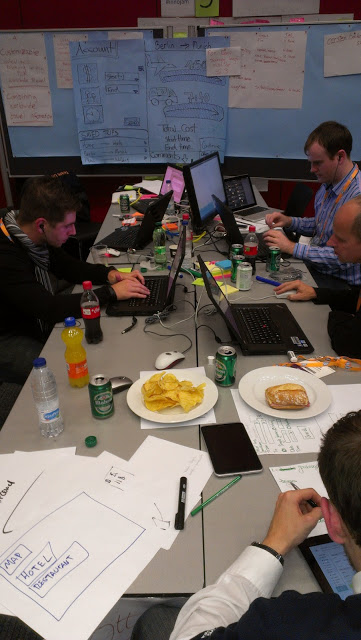 We met up at 8am the next day refreshed and fuelled by the endless supply of Espresso coffee on offer. We reviewed our work and discussed who needed to do what and by when in order to hit the 3pm deadline of the presentations. I got to work on building a data table in HANA (I have never done anything like this before) and needed a lot of help from Tom Jung who was very patient with me! This also proves you don’t need to be a techie to enjoy InnoJam as there is plenty of really excellent support for the various technologies.

We got to work on the presentation and made up a story line to go along with it, again the Brandenburg University guys were excellent. 2pm came around very quickly and we ran over what we had done, linked all the solutions together and made sure the process for the demo was in place and then we were done! Time for the demo. Each team got 6 minutes to show what they had built to everyone else and a panel of distinguished judges. The presentations all looked really great and actually two teams came first and got the slot at DemoJam! 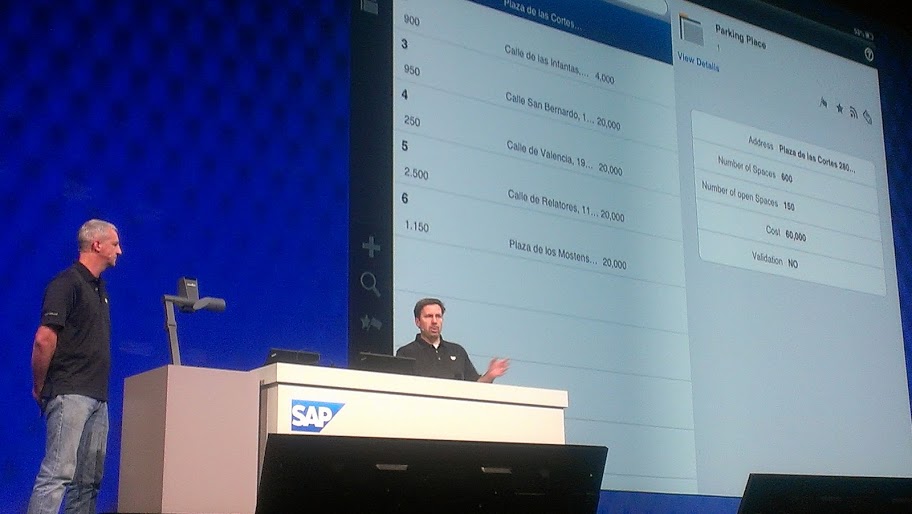 I could carry on all day writing about InnoJam as it is such a great event and so much happened. My role is actually in Sales and I’m not technical at all but I do try, we had folk from Marketing, Education & Project Management as well as developers attend. The event needs people from all backgrounds to really make it work well so if anyone is thinking about an InnoJam for 2013 Sign up! Keep an eye on SCN and get involved.

thank you very much for this nice blog and for your contribution to our team. That was really a fun thing.

Thanks Mark, really enjoyed working with you too and I think we all made some good friends.

Good blog Tim. How in last year it was again a pleasure to work with you at InnoJam. I hope we can do it again next year...and I hope we will then finally get the first place 🙂

I think I know the secret: The project needs to be user friendly, look graphically good, have the potential to make money, be cloud based, use HANA, use a mobile device and include a social aspect. Let's start planning for 2013! 😆

🙂 Every year I came back and I think "Now I know the secret"...but next year I realize that there are many more secrets 🙂

Oh, I missed off Augmented Reality and brain control of the device!