Many customers frequently use End-User Experience Monitoring. Nevertheless, it is difficult to find an easy reproducible case to present. I would like to show a case which one of our customers recently faced and explain how we analyzed it with EEM.

The customers have a central CRM system used as a central customer contact system from several international locations.

Call center agents – especially from one location – complained about insufficient performance and a frozen browser during typing. This frozen-screen issue sounded a little weird like the behavior of old computer machines where every key stroke was send to the server before showing up on the screen.

Some details: There is a comment field in the customer contact page which is used to collect information from a calling customer. When the call center agent typed into the comment field the letters did not show up immediately. The letters appeared a few seconds after typing.

Interestingly, the issue only occurred from one of the remote locations even if both are supposed to have a very similar setup regarding network connection and number of call center agents.

At first glance it looked like an executed round trip to the server. This wouldn’t make sense for a simple edit field. There should not be any round trip for such an activity. Our analysis also confirmed that there is no round trip during typing.

We started the root cause analysis (RCA) by recording the business process steps in question (You can use the E2E Trace recorder as well as the EEM-Recorder). The result of the recording in the EEM-Editor looks like this (partially screenshots): 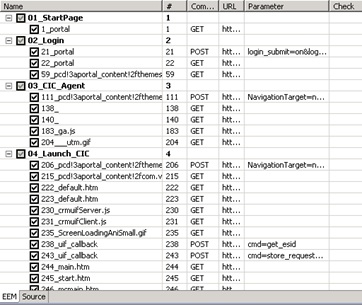 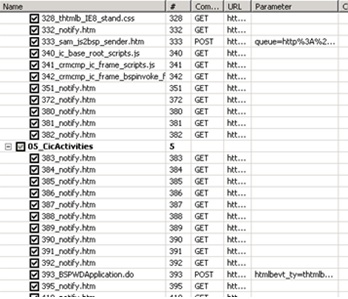 These calls started immediately after launching the CIC client.

The obvious questions out of these results are:

The notify call is used to update the client UI with server notifications as the server cannot send information to the clients from his side. The clients have to ask for notifications. The standard polling interval is 1 second. Therefore every client window sends such a request to the server every second. Agents often work with several open windows so a lot of network traffic and server activity is created.

Such a request is very quick if the network is good. In the table above the requests took between 15 and 32ms at the main location which is close to the data center.

The average response from a remote location was already between 150 and 200ms but due to some network drops it took up to 4,4 seconds.

The real issue is the network drops from the complaining network location; it slows down the response time of the client application. But still the question is why do we a have a typing freeze if there is no round trip to the server during typing?

To understand this you have to keep in mind that browsers have a limited amount of connections they are opening to proxies/servers in order to save network resources. Originally this limit was 2 connections and older versions of browsers are following this (see RFC 2616).

Newer browsers do not follow this limit anymore. They are opening up to 8 parallel connections.

If we assume a maximum of two connections, a polling interval of 1s (remember the <notify> call) and response times for the polling up to 4 seconds it is obvious that the browser can get frozen for some seconds. The assumption is a blocked browser due to long running <notify> calls.

There are two apparent solutions to reduce the frozen times.

Solving a network issue can be very time-consuming. As this is the undelaying issue it should be a top-priority issue. Despite a top-priority status it will take some time until the issue is solved.

Increasing the browser connection might help a little bit. Thus it is recommended to use a newer browser version as they allow a higher amount of connections. For that reason more server resources are requested.

this was a very good article explaining how to use Root cause analysis and EEM for these kind of issues which are always a nightmare when they come up.

In our company we are implementing EEM for CRM and the web channel, but we are having many issues with scripts recorded on the CRM WEB UI, in particular we have a web dispatcher which seems to create confusion in the scripts for the session IDs which are not handled correctly. How did you guys parametrize the session ID in the scripts?

this should be done automatically (in most of the cases) by the EEM Editor. If a special case is not covered we are extending the editor with new correlation rules. Therefore it is important for customers to have a new version of the editor especially if they face issues.

If you have problems with correlation I would first go for the newest available patch for your Solution Manager Release as well as for the latest available, corresponding EEM Editor.

If this still doesn't help you can create your own correlation rules and extend your editor this way.