A novice VisI entry for the Data Geek challenge

Following a VisI presentation by Andrew Fox of itelligence at a recent UK & Ireland SAP User Group meeting I decided to download the SAP VisI trial and have a play to see what it could do. My day job is 90% WebI-based, so using a visual tool like this was very new to me & I’m sure I haven’t even scratched the surface of the possibilities yet.

As a born & bred Londoner, the Olympics were a big part of the summer. As a former wheelchair user, the Paralympics were an even bigger event for me. I was fortunate enough to get tickets to events for both Games and thought that the Paralympic data would be the less obvious choice for potential VisI data geeks.

I started with a couple of datasets from the Guardian website and imported them into VisI. After a little data cleansing (changing USA to United States, Great Britain to United Kingdom etc) I was able to create a Geographic hierarchy in each of the datasets and then merge them. I then created a few metrics and I was ready to start. I then swapped the competitor count metric for the count of medals which shows China firmly in control of the final medal tally: 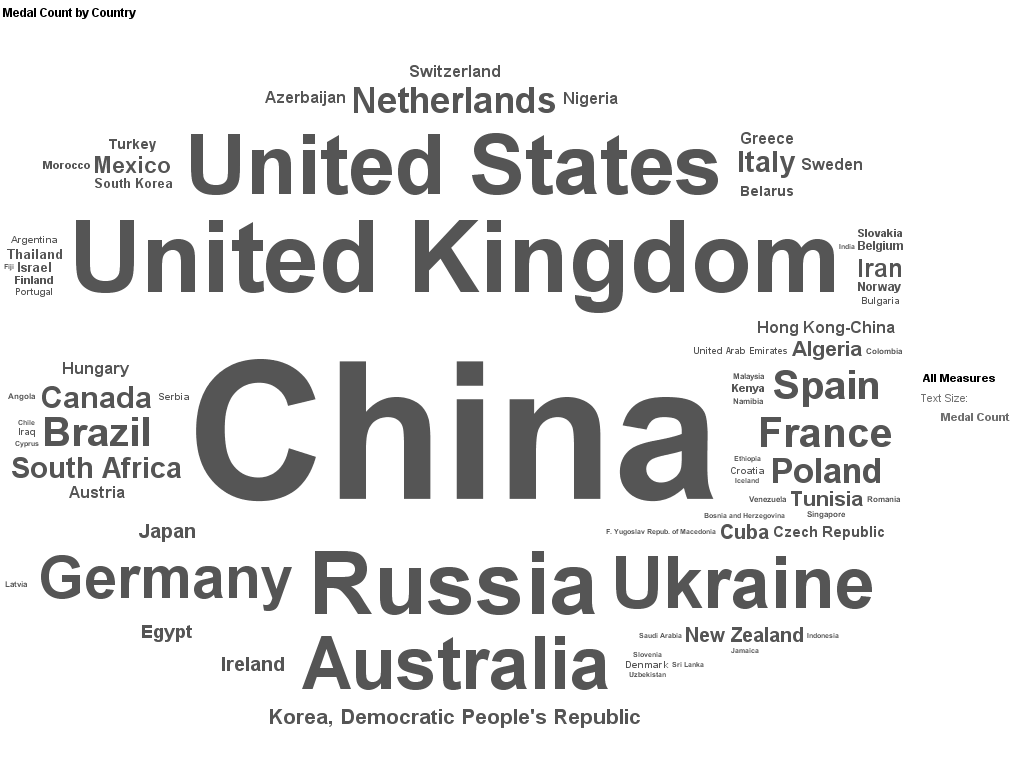 I decided to switch to a Geographic Bubble chart. These are pretty funky, but when looking at global data the bubbles have a tendency to overlay and Europe became a bit of a mess: 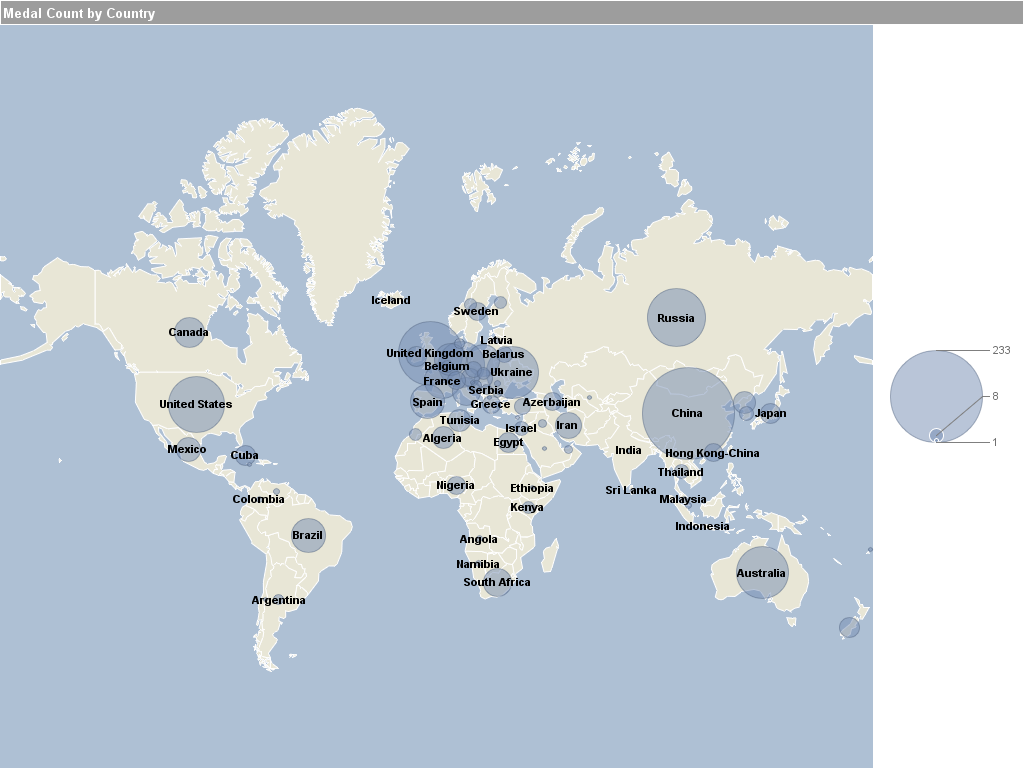 I knew that a number of the ambulant disabled competitors at the games had trained with their able-bodied Olympic counterparts, so I created and added a “Wheelchair Discipline?” filter to see if some countries were proportionately better at the ambulant disciplines than the wheelchair ones (assuming both had access to the same level of funding & training).

From the following two Tag Clouds (ambulant medals first) and the bar chart, you can see that France and the Netherlands perform significantly better (on a pro-rata basis) than the UK. Is that related to the better training routines of the UK’s ambulant medalists? Interestingly, it also highlights the fact that, of the top 15 countries, Russia, Spain and South Africa didn’t win any wheelchair medals. 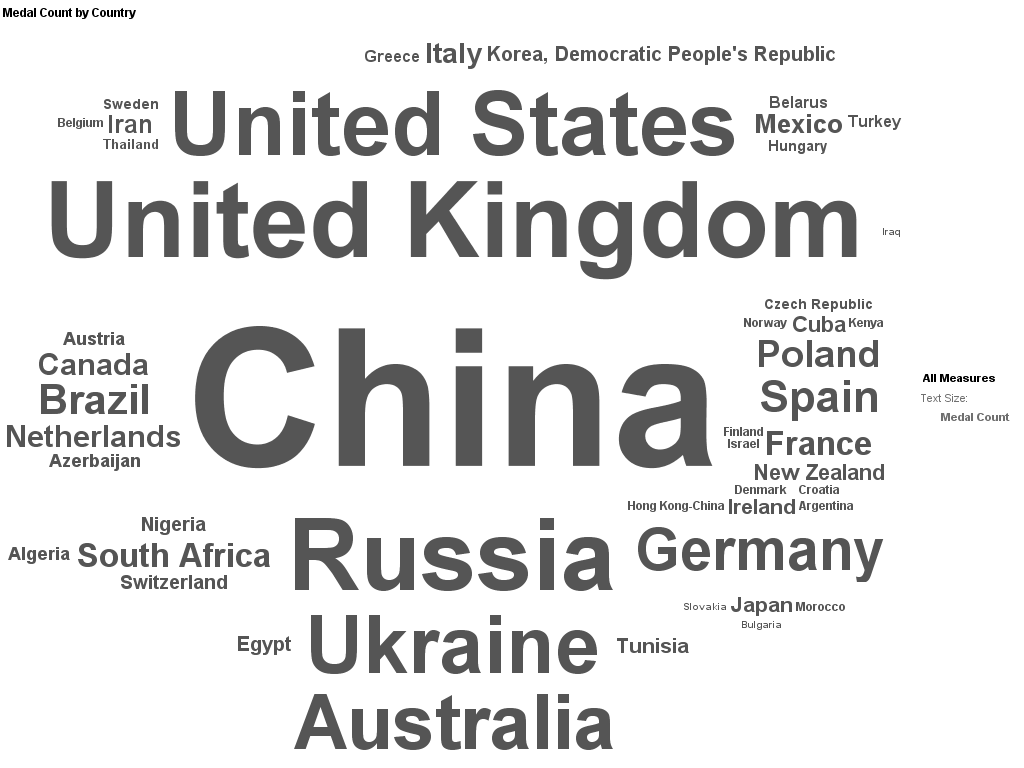 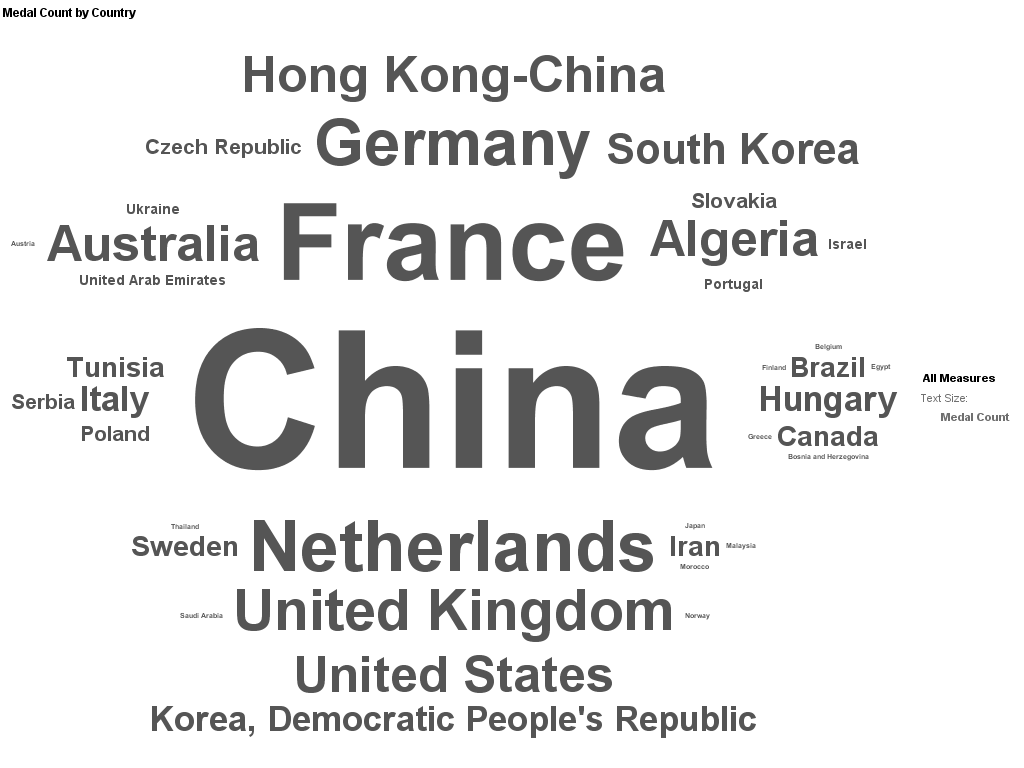 I then decided to have a look at the medal splits (rather than simply the totals) for the top 15 countries. This gave me a bar chart (I would’ve liked to be able to edit the palette to change the colours of the bars to gold, silver & bronze) and some more Geographic Bubbles (all countries): 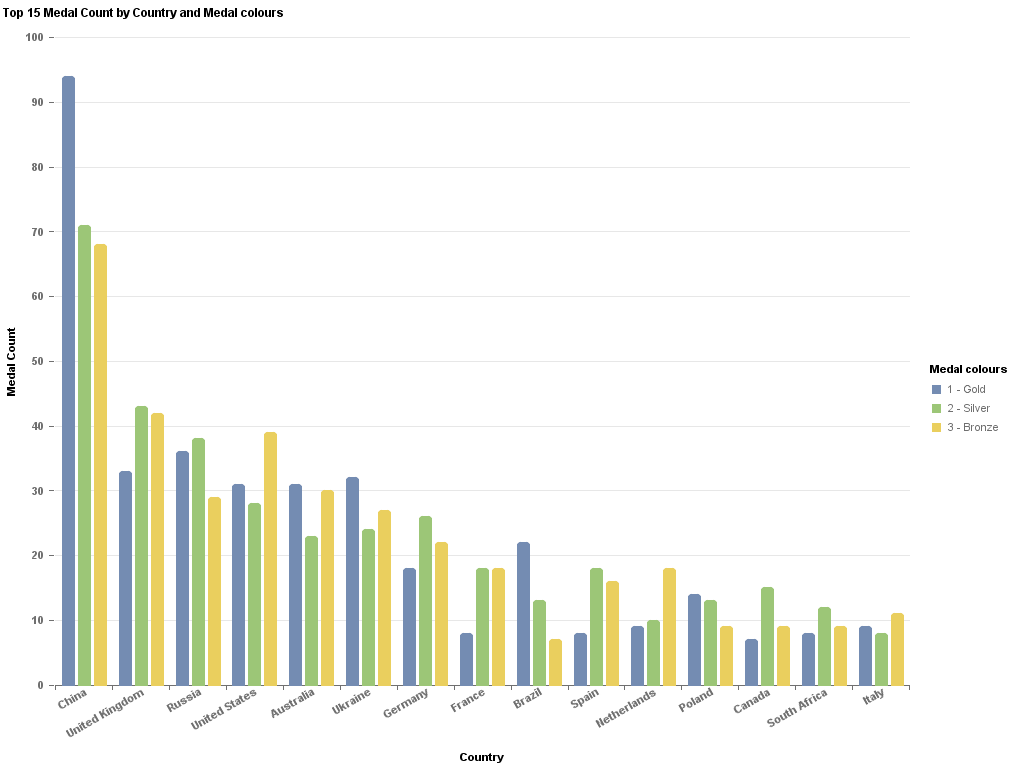 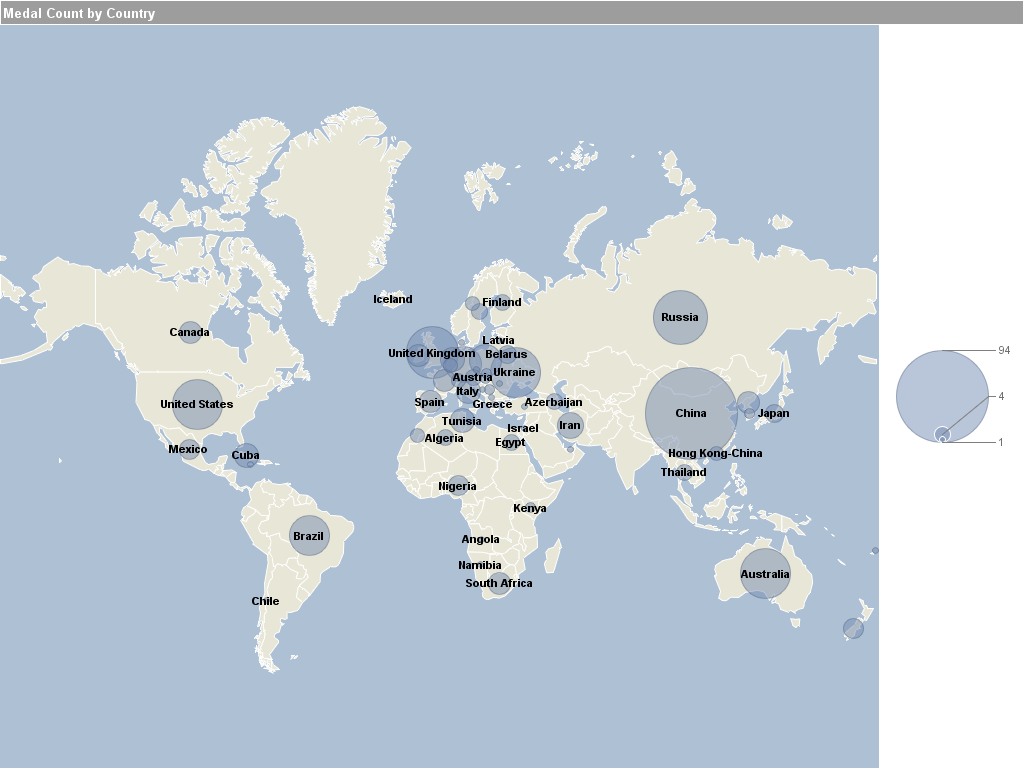 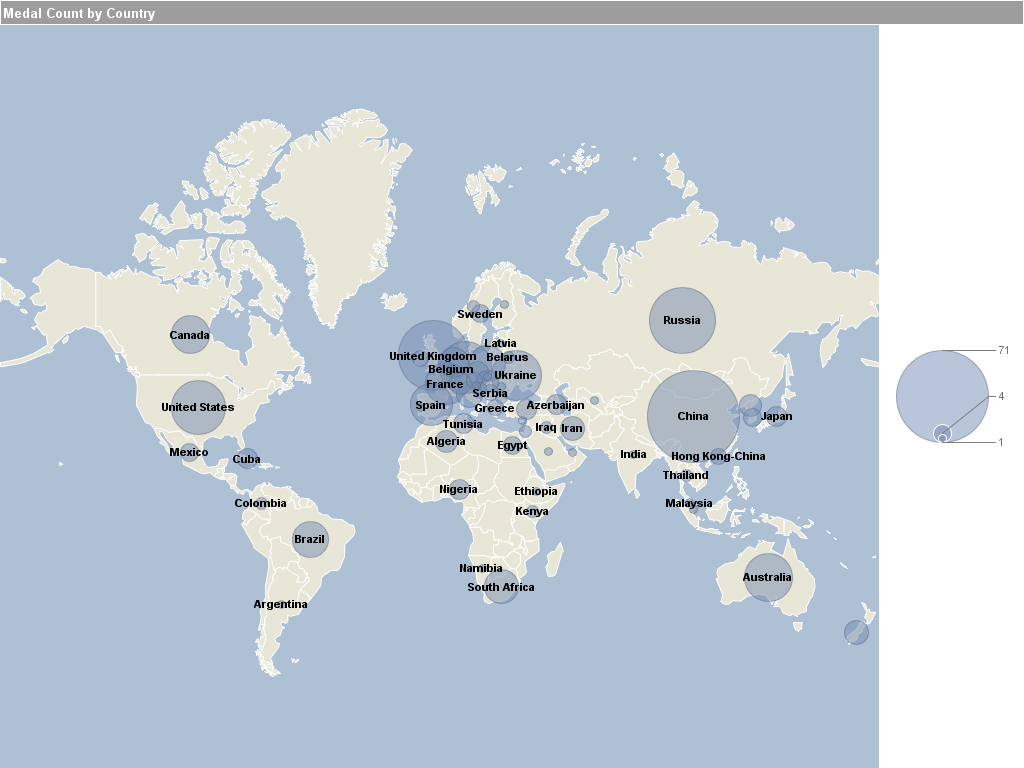 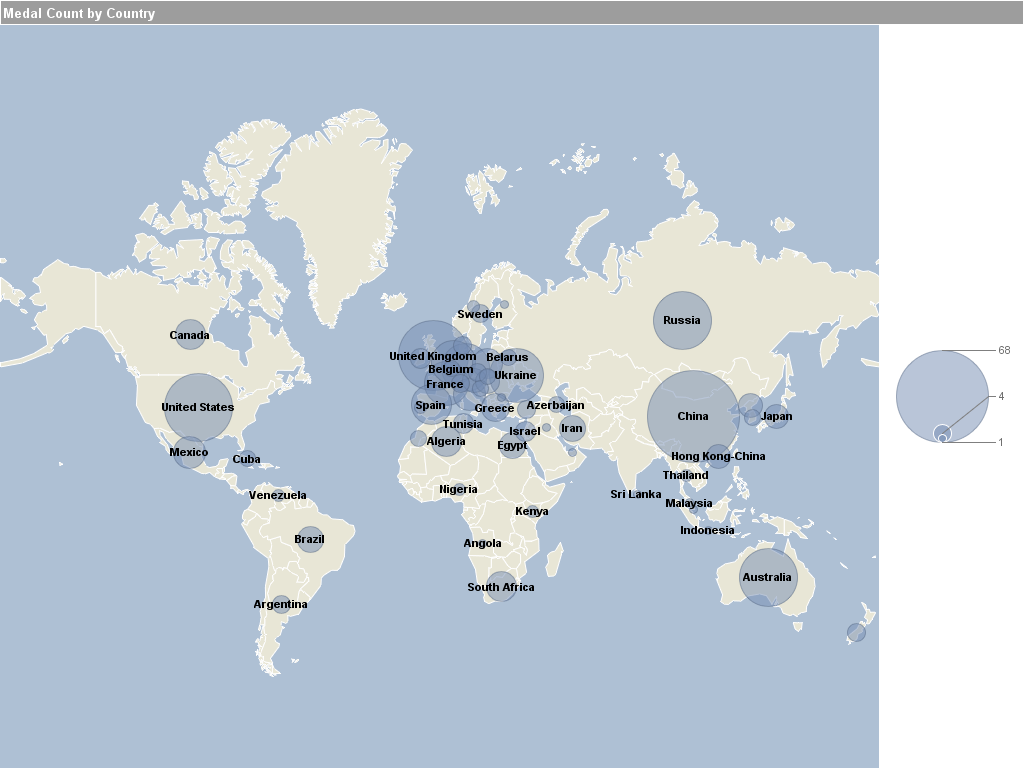 Lastly, I had a look at a Bubble chart that showed the number of medals won, the number of disciplines they were won in and the total number of competitors for that country (top 15 again). The idea here was to see the start of a weighted comparison of which countries were most successful. 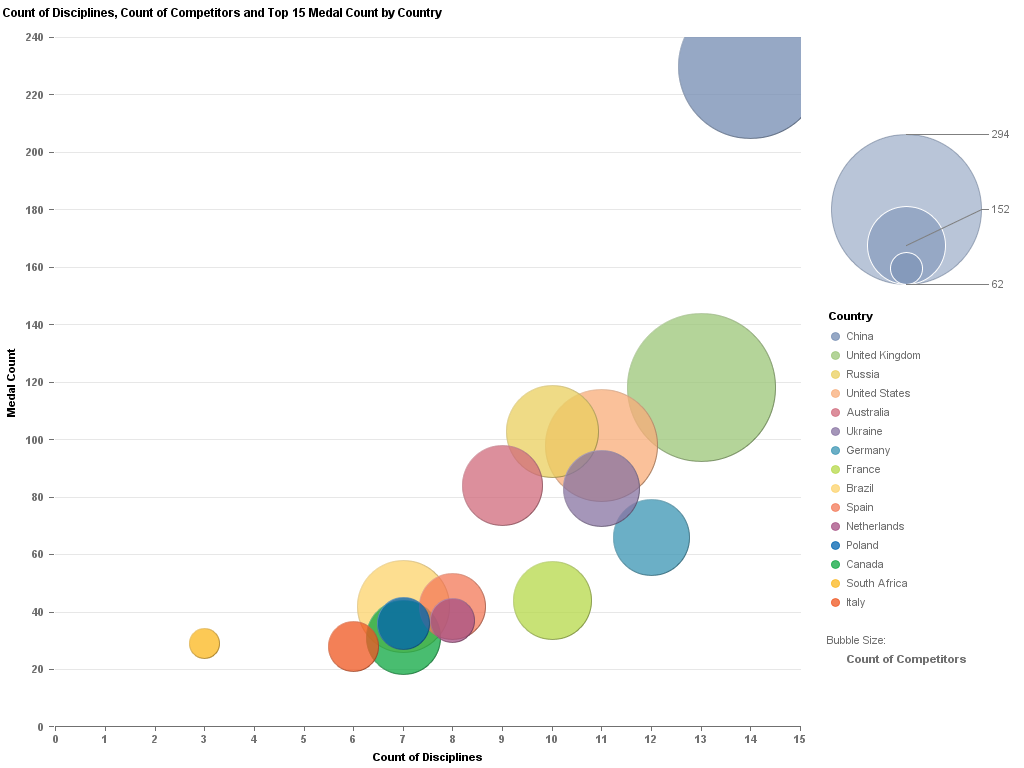 Finally, I’ll leave you with one last image. This man is a hero to me, a massive story at the Games and was one of the inspirations to get me walking again. For those who don’t know who he is, read his bio & be amazed.

Very cool.  a good excercise with a nice sentiment .