Notes from #BI4Elite training in Vancouver, BC Canada – Day 3

(For reference make sure to check out the original announcement of the BI4 Elite Enablement class and my post summing up the Day 1 and Day 2 notes.)

Day 3 had been originally what I had been most interested in seeing – the deep dives on the individual front-end tools.

Q&A with Ingo Hilgefort before getting started on the labs… 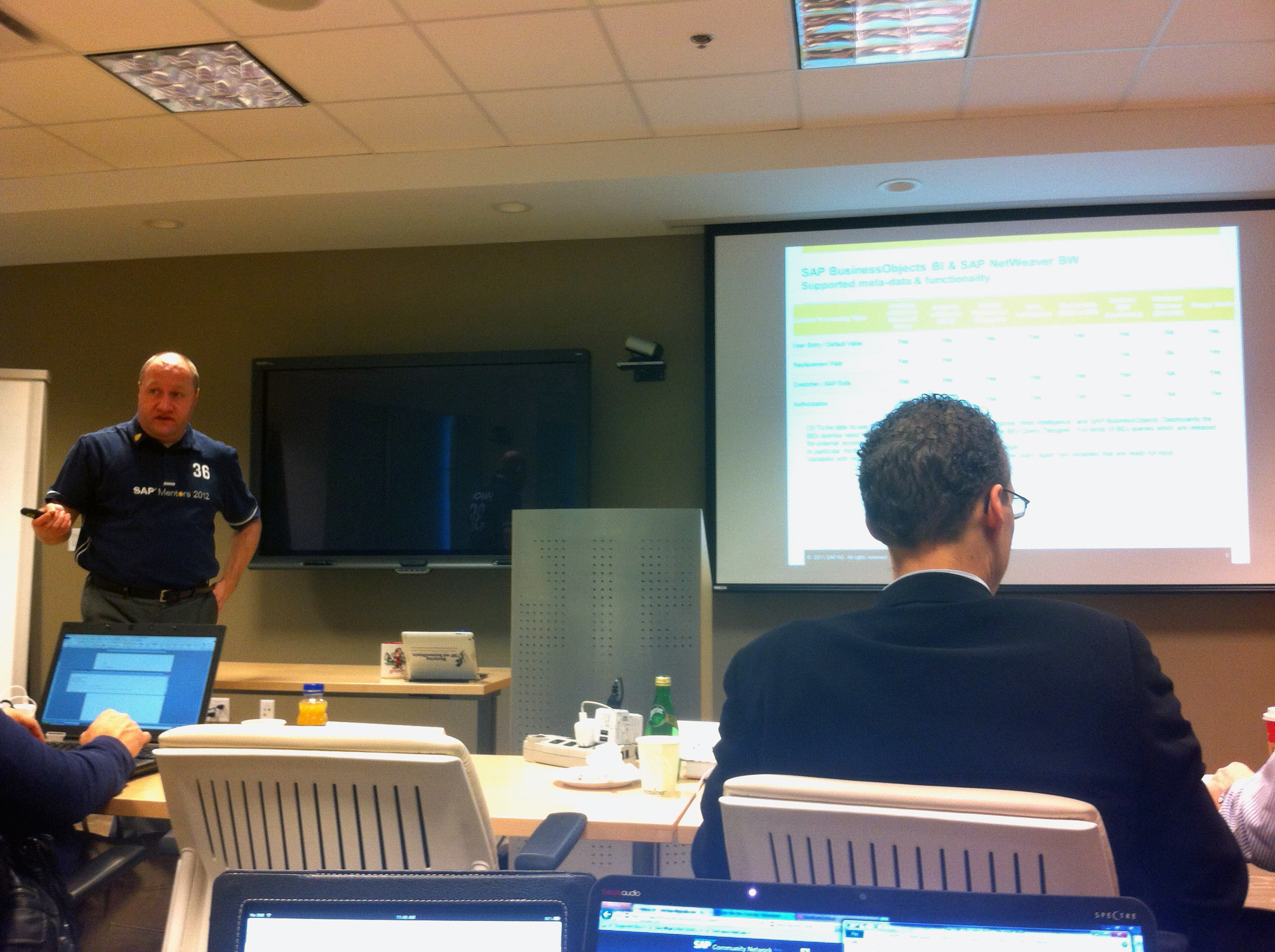 We asked as question pertaining to our old 3.1 universes and what we should do with them.  Start slowly converting the reports from pulling against Universes to pulling against direct BICS queries.  There is no automatic conversion, so this can be run in parallel, but should be a project to start converting.

Additional items such as text meta data (BW refresh etc), hard coded filters, currently are only supported by Analysis for MS Office, though are being looked into having the other tools be able to pass this information in later versions of the product.  (As of SP4.)

Replacement path – picking up the items from query 1 and passing them to query 2.  You can use this to fake a condition to WEBI.  (Ex top 10 customers are passed to second query.)

A conditional requires a multi-dimensional understanding.  Crystal, WEBI, and Dashboards are relational designed tools.  This is why we will not see conditions in those tools.  If conditions are important for your report, Analysis is the tool you should be looking at.

No Zero suppression for Crystal, WEBI, and Dashboards  – none is planned.   This is due to the relational vs multi-dimensional tool.  It requires the tool to understand the rows/columns and as a relational tool it inherently doesn’t have this.

Analysis for MS Office 1.4 (BI4.1) Scheduling and broadcasting is planned for those release.  Analysis for OLAP is planned, but sometime after 4.1. Design Studio is working on a solution for scheduling/broadcasting as well, but is currently not supported.

Starting the run through of the SAP BO Client tools…

You will notice that there are 2 different versions of Crystal – 2011 and Enterprise.  As an SAP shop, Crystal Enterprise is where you want to focus.  We followed the presentation with a couple of hands on exersizes that demonstrated Crystal report building, tweaking, and using hierarchies.

The WEBI client tools were next up…

Big note – SP4 introduces merging on attributes.  This will take some research for us as it has a lot of implications on how we have been merging BW bases Universe queries and forcing associations with variables.  In SP4 create CCS to control look of report.

Again it was mentioned that 3.1 Universes are supported, but in maintenance mode only. 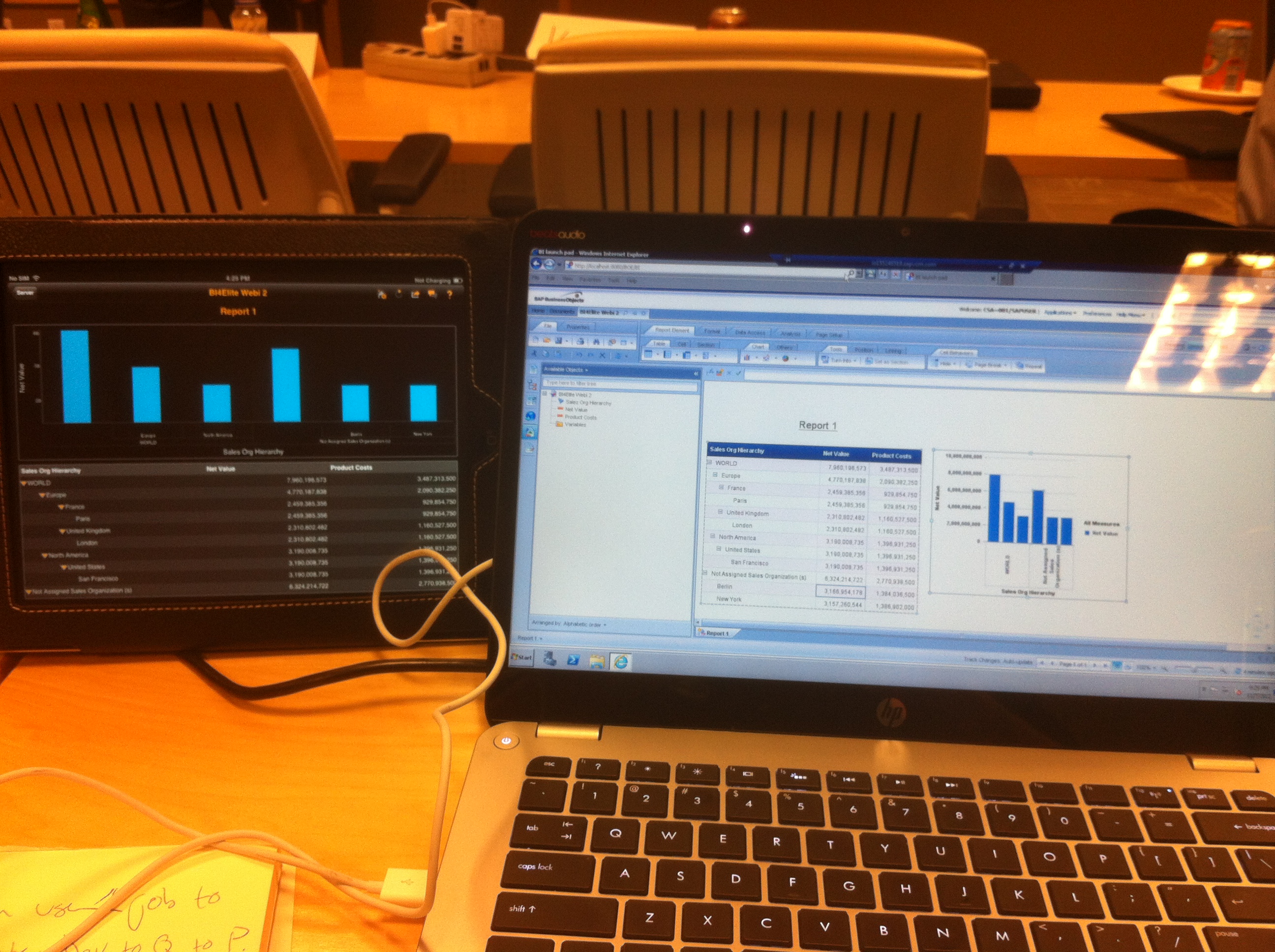 Hierarchies entered the picture as far as WEBI is considered 4.0 SP4.  We did a practical lab on this and passing the hierarchy levels up to the report was actually quick and easy and displayed well on the iPad when we activated for mobile.

Moving on to Analysis for MS Office…

3 things, Design Studio, Analysis for MS Office,  and Analysis for OLAP – these are the premium successors to the BEx toolset.  BW 7.3 was the last version to ship with BEx Analyzer, so it will be supported through 2019, but are now classified as in maintenance mode.  Query Designer, no end of life, but is in maintenance mode as well – though it doesn’t go away as you will continue to use it for BICS connection.

Analysis for Office and OLAP do not need the queries flagged as released for OLAP connections.  (Same functionality as using BEx Analyzer.)  Analysis for Office supports APIs as excel formulas.  This would replace the old method that we used in BEx workbooks of embedding queries and adding macros on top of this.  It brings this methodology within the landscape and makes it a supported activity.

There isn’t anything you can do in a BEx query that Analysis doesn’t support.  You can have Analysisfor MS Office and BEx Analyzer installed on the same PC, but they both cant be run at the same time.  The demo on 7.3 workspaces and its interaction with version 1.3 of Analysis for MS Office was quite interesting.

Create Web Application – builds a design studio applicationbased on what you designed in Analysis for Office.  Planned for version 1.4, so probably 6-7 months out.

Next up, Analysis for OLAP… 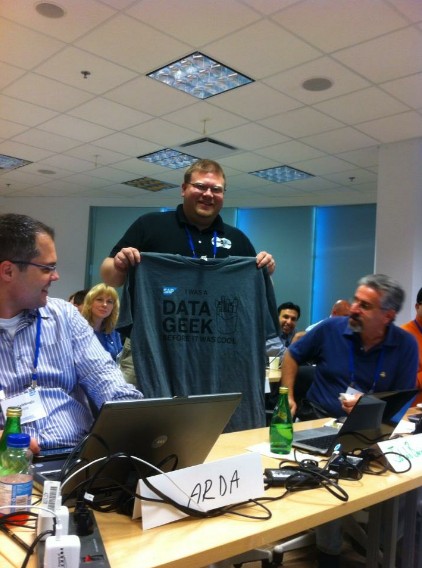 Around this time I had stepped out of the room to talk with Nic Smith and the Data Geek Challenge.  It was a brief interview about my impressions on the week so far and BI Mobile in particular.  It was fun and I ended up with a fun t-shirt.  (See above)

This is a developer tool, not for the average business user.  Not any time soon non-SAP data sources – priority is BW and HANA.  Theywill ask that SP4 is the minimal version level to be on BI4.  If you have a license to Xcelsius will get Design Studio – free!  Outputs toHTML5.  (Make sure to read the Statement of Direction out on the SAP site to discuss how Xcelsius and Dashboards will merge into Design Studio.)

Two options to deploy the applications – QR codes (whichallows to users to scan code and get to the report.)  Also integrates with Mobile BI and can pus to that. Version 1.1 likely means Q2 2013, and there is a 6 month cycle for Design Studio,

After the SAP Business Objects Design Studio presentation we were given a lab that allowed us to work with the product, build and app, and
deploy it to mobile.  The last lab ran us to the end of the day, even a little past.  It was an intense day of hands-on work, but some great ideas and discussions throughout the day.

If you are interested, a few of those tweeting from the SAP BI4 Elite Enablement event:

Let us know what you think of the coverage!