EhP1 for NetWeaver 7.3 SP05 was released at the end of October. It comes with several enhancements and improvements for Business Process Management and Process Orchestration scenarios.

Most notable, you can now use any web UI technology to build task UIs for BPM, for instance the HTML5 toolkit from SAP. Before, user tasks could be linked only to WebDynpro Java, WebDynpro ABAP or Visual Composer composer UIs.

Now, you can enter a relative URL, which is called at runtime to open the task. You can also specify the input and output XSD type of the task. 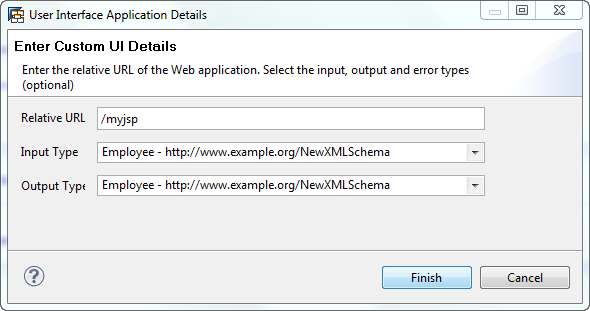 See below for a sample task UI built in HTML5: 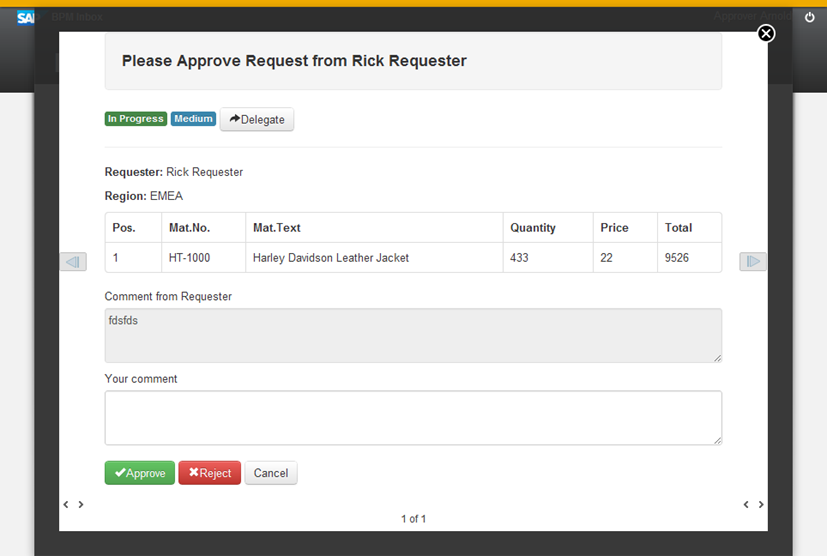 Since SP04, actions on user tasks and messages received by intermediate message events are processed asynchronously from an action queue. This queue can now be monitored by an administrator. 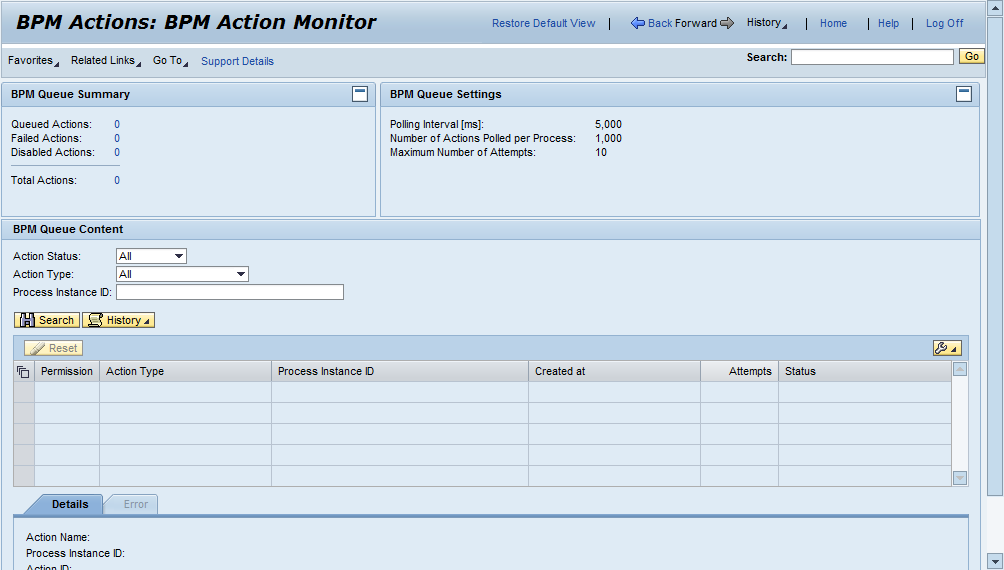 For instance, messages that have been correlated to a certain process instance (correlation condition is met) but have not yet been consumed (because there is no active token at the intermediate message event) will be listed. In case of an error, the action is retried automatically several times before it finally fails.

Export of processes and tasks to spreadsheet

You can now export process and task instances to a spreadsheet from NWA. This allows running some advanced queries and filters on the data and creating custom charts. 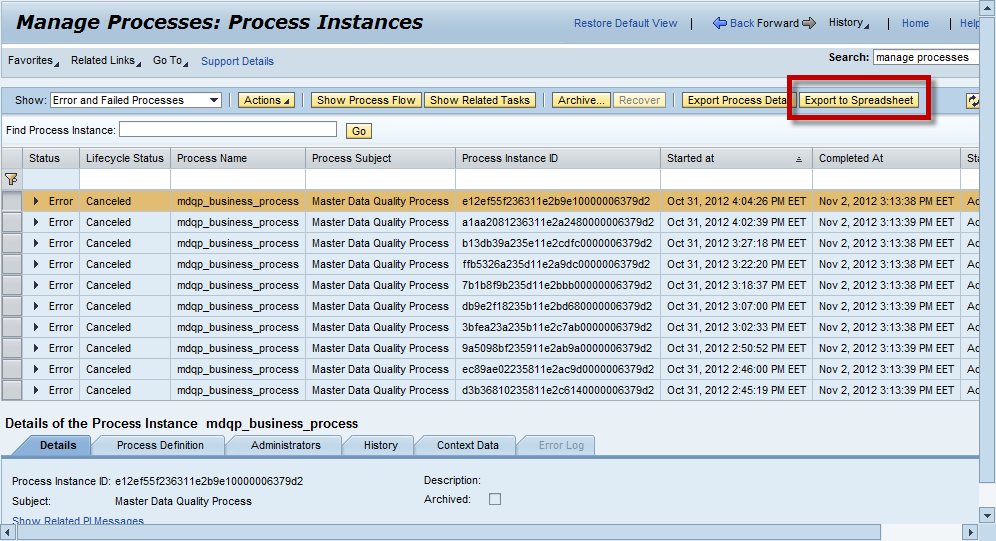 URL Parameters for Processes and Tasks in NWA

The Manage Process and Manage Task applications in NWA can now be parameterized and called from external applications. For instance, in order to display all process instances which are “in progress” and have been started by user “guest”, use the URL

For a full list of available parameters, please refer to the product documentation.

There is also new functionality for scenarios using the Process Orchestration installation option (joint deployment of NW PI and NW BPM on a single Java system). In these scenarios, PI messages will be sent to/from BPM processes. Using the BPM Log Viewer, you can now check which messages a BPM process now has sent and/or received, or which BPM process has received a certain message. Using the various event types, you can also check for messages which have not been correlated or consumed by any BPM process at all.

For a full list of changes in SP05 including also other NetWeaver components, please check the relevant release notes.

I've been hanging out for the open UI integration ... that really takes us out of the traditional SAP to SAP realm and into a much more open framework!

Also looking forward to the Process Orchestration monitoring - will save a lot of hassle.

Thanks a ton for this great news. Finally, the UI development is unleashed !!

Thanks Christian for sharing the information ...

Open UI integration with BPM is really great news. And I have a question.

Is this possible? htm5 UI on different server from bpm server ?

And can I get any sample article bpm + html5 ?

Hi Jinho Choi, I can answer that one for you.

Yes definitely the UI, whether it is HTML5 or not, can sit on a different server to the BPM server.  As Christian points out the intention here is to support *any* web-based UI technology - whether SAP or non-SAP - and in the task you can we specify the absolute URL to the UI.  So effectively the BPM task launches the UI which may sit on any server accessible to the user at the time of launching.

As for guidance in an article, yes we are aware of this need and hope to provide something soon.  The requirements themselves in the BPM Task are straightforward, but there is some guidance needed on using the BPM API to update the task from the launched UI.

At this stage if you want to try this now, I would recommend looking at the following references for the SAP-centric parts of your UIs:

http://scn.sap.com/community/developer-center/front-end - for general information and tutorials on getting started with SAPUI5

End-to-End How-to Guide: Building SAPUI5 Applications on SAP NetWeaver AS ABAP 7.31 Consuming Gateway OData Services - to take it a step further if you want to mix SAPUI5 with extracting information from a ABAP system via Gateway.

Of course you can use an external web UI in which case the BPM API is the most important aspect to understand over and above the information Christian has already given.

Thank you so much Jocelyn.

I really happy to hear your answer. Also Thanks for your kind guides. Actually I have already read articles which you recommended.

I hope html5 UI and BPM can interface with AEX(PO).

In my project site, we are going to have 2 months pilot project which starts in 2 weeks based on NetWeaver PO 7.31 SP05. We will test every technical issues during this pilot project.

I need the how-to-guide immediately and I hope it comes out on right time for me.

Unfortunately, the absolute URL based task definition that you mentioned doesn't seem to work. Its obvious that the relative URL field takes only a relative URL (as shown below). Did you manage to make it work? 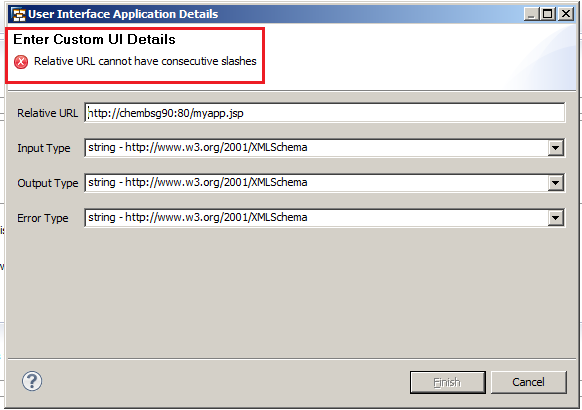 "In principle, you can make use of any UI technology that is able to access a Java-based API and that can be deployed to the Application Server Java (AS Java)."

So you can definitely use your HTML5 but at least at this stage you need to deploy it to the AS Java server.  I would assume this is to minimize performance and availability problems in launching the task.

Is there a particular reason why you would not be able to deploy your UI onto the AS Java server?

And I would also suggest you add your need to launch to an external server into the Idea Place under BPM - that should get you an answer as to whether this is being considered for the roadmap, and if not, get it included for consideration.

BTW all the examples I have seen and worked with so far are using HTML5 so that part is definitely fine.

Thanks for the quick update. I've come across customers wanting to use/ build .NET based UIs (deployed in other servers) and use them as task interfaces with SAP NW BPM.. I'll raise this in the Idea place.

Thanks for quick update, Jocelyn.

I also found that in process composer just relative URL is permitted.

And In our project environment, it is not easy to deploy UIs to as java server.

So, I am trying to use URL redirect.

should be solved. Because they are different servers.

For this reason, I guess BPM allows just relative URLs.

In our project environment, UI5 are getting deployed in ABAP server , is there any way that a fixed URL can be given instead relative URL's in human activity??