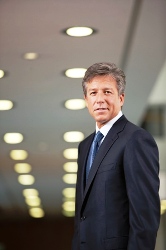 I am very lucky to work at a company where I feel inspired every day. I am inspired by my colleagues, who despite the pressures of life, continue to produce incredible results across the board. I am inspired by my manager, and his manager, and my friends managers who are nothing like the terrible bosses I had pictured I would have. And last night, I was once again inspired by the co-CEO of my company Bill McDermott (pictured) as he spoke to a full auditorium of students, SAP colleagues, and adults at the Drexel Bossone Research Center with university president John Fry.

The fireside chat, hosted by interim dean of the Drexel LeBow College of Business, Frank Linnehan, kicked off with the SAP “Run Like Never Before” commercial. This, if you’ve never seen it, is an incredible 60 second, visual, that really captures the vision of SAP.

After the spot ended, Frank shared with the audience a brief overview of Drexel’s “A View from the Top” series in which great organizational leaders, ones who embody the ambition, vision and other empowering qualities, come to share their insights and experiences.

I’ve attended events like this before, and typically I walk away without any “aha” moments; however, after leaving last night I couldn’t help but feel truly moved. The topics of small businesses, globalization, and leadership, all paired with a humorous story from Bill McDermott, each had a key takeaway for not only the students, but also for the SAP and community members alike.

Not everyone coming out of college will go on to work for a 65,000 employee company like SAP. They may enter a startup, or even go out on a limb to open their own business. Small businesses are typically cited as the bulls of the market. These SMB’s (small to mid-size businesses) are often credited with being innovative, agile, and transformative to the traditional ways of doing business.

Back in his hay day, Bill had the opportunity to open his own small business, a delicatessen. A banker gave him 5,500 in notes and $7,000 in interest.  To which he said, “that meant, you’re broke, but someone was nice enough to loan you some money.”

One day when he was at the mall he saw tons of kids putting tons of quarters into the video game machines. He knew if he wanted to not only grow his business, but appeal to his teenage customer base, he had to accommodate and give them what they wanted.

He called up the video game company, and the sales rep let him know it was $5,000 for a machine. At the time he didn’t have the $5,000, so he cut a deal – “I told him I’ll build a room off the side of the deli, and I’ll split the quarters with you.” In 60 days, the quarters he split paid for the business.

The takeaways, “It’s the customer, it’s segmenting your markets, it’s being authentic around who you are and what you can do to win and service your customer better than anyone else, and it’s an idea. Everything happens when you change the status quo. If you look at all the breakthroughs that happen on an idea; it was one idea, accidental, and we acted on it and bam. It’s the same today…I’ll take you forward to SAP we have one idea. To put all the data in corporations in memory…it’s creating an entirely new industry…innovation is everywhere, but you have to constantly be looking for it.”

These small businesses are everywhere, not only in the United States, but especially all over the world. When president Fry asked how Drexel students can prepare themselves for this landscape, Bill touched on the importance of becoming a worldly thinker in this global business structure. Countries like Brazil, where 65% of the businesses run SAP and 90% of those businesses are considered small, SAP is still a startup. There is still so much opportunity for growth, not only in capital, but also for graduates to go and learn and work.

“The global economy is there for you, this is an international game and you need to think that way. I think the language aspect is important…if I was doing it all over again I would go for languages, I would definitely spend my time getting a language or two under my belt.”

Getting that first killer job is so important, Bill suggested. He advised that students should go with people who are doing things and going places; find the industries that are growing such healthcare and retail. Technology is changing these fields, and according to Bill, “the winners that know how to deal with the consumer and completely digitize the end to end process” will be the most successful. But, students do their research about the topics they’re most interested in and the companies within those spaces. Researching your customer and the industries where you can innovate through your passion, will make you successful.

This was the topic I was most looking forward too. It was incredible to hear from someone whom I consider a real leader, what he thinks comprises a comprehensive leader. Bill shared his experiences with the leaders he’s met; they’ve all got a few things in common:

He warned, “Watch out for people who tell you can’t do something, or you’re not capable of something. Those are the very people you owe everything too, even your biggest bonus, because they’ve done you a huge favor by increasing the size of the chip on your shoulder.”

It was an unbelievable and inspirational night. After the fireside chat, I had the opportunity to network with not only my SAP colleagues, but students from all over the Philadelphia universities who traveled to hear Bill speak. A Drexel teaching assistant shared, “I come to these events all the time, and I am sorry to say I was ready to fall asleep, but I was blown away.  Not only was I not sleeping but I was on the edge of my seat, engaged the whole time!”

I myself felt similarly, as well as did Christine Donato, a member of SAP’s Services University for Learning, “It was engaging, motivating, and inspiring—the passion that Bill McDermott has for SAP filled the Drexel auditorium last night. He stressed the importance of young professionals to not only build their brand, but to live and breathe it every day. “What’s your vision?” he asked us, a question that will remain with me throughout my entire career.”

This article originally appeared on Business Innovation from SAP.

thanks  Lindsey Nelson for upload this article