Does what happen in Vegas stay in Vegas? A Reporting & Analytics Update

Reporting & Analytics, held this week in Las Vegas, was co-located with Projects 2012 and Mobility 2012.  This event is produced by SAP Insider / Wellesley Publishing Services.

Unfortunately due to the hurricane, some speakers could not make it to Las Vegas, and I assume this was true for attendees. 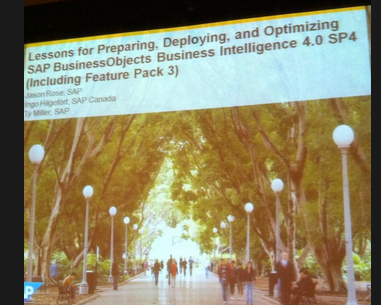 This session was an overview of BI4, combined with a SAP integration update, and Ty Miller spoke about BI4 with Hadoop.  Some highlights:

Jason suggested everyone try out BI on Demand for free at

He suggested that everyone try out Visual Intelligence for free at https://www.sap.com/campaign/ne/free_trial/visual_intelligence/index.epx?kNtBzmUK9zU

He also said there have been 1600 downloads of Visual Intelligence so far.  I didn’t get a chance to ask how many of those customers have been using it in production (question via Twitter).

Some highlights from Ingo Hilgefort’s part in the Jump Start:

The next day, after the keynote, Ingo Hilgefort held the first SAP Experts session. 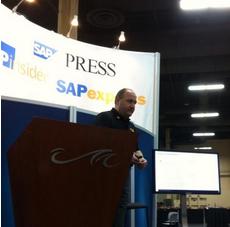 This was a first, where SAP Experts provided attendees a copy of an article written by a SAP Expert.  In this session, Ingo spoke about SAP integration features that came with BI4 FP3/SP04:

Also, I attended hands-on sessions with BI4 with SAP Integration, mobile BI sessions, and a session on embedded analytics.

Lastly, what is a conference without some swag?  I followed Nic Smith tweet and visited the SAP booth for the Data Geek shirt: 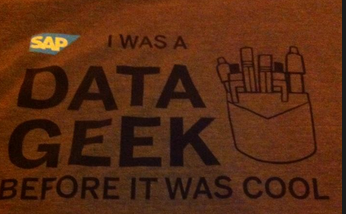 I want to thank the SAP Insider team for a great experience and a great event.

Thanks for this review of the show. Ingo's "Experts Live" session was the first one we ever taped at our booth, so we were happy with the attendee turnout and also with the info Ingo discussed.

Tammy, these two points listed in the blog seem to be contradictory to me: "Recommend leverage BEx query in BI4 against BW data sources." and "Universe in BI4 does not connect to the BEx query", or am I missing something? Will appreciate your comment. -Vitaliy

Overall in the sessions the recommendation was to use the BEx Query where possible to take advantage of  authorizations, restricted key figures, calculated key figures, etc.