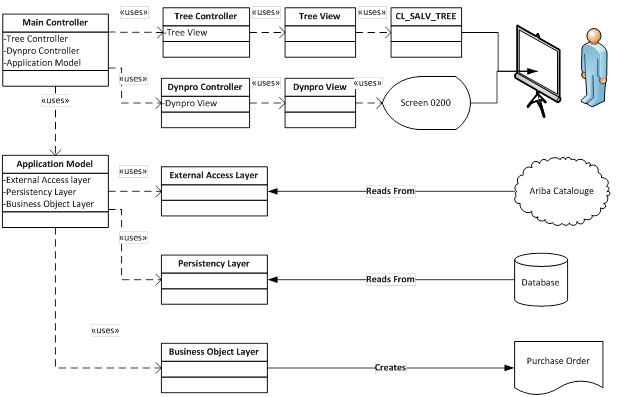 For 22 years I have been to Quarries all over the UK, Australia and Israel and the above diagram looks right to me based on my observations. Most probably everyone from every country would agree this is how they do things; you are not really giving them anything to argue with.  Then it is just a question of expanding one box at a time….
·         FIGURE 2 – Still a High Level Business Process 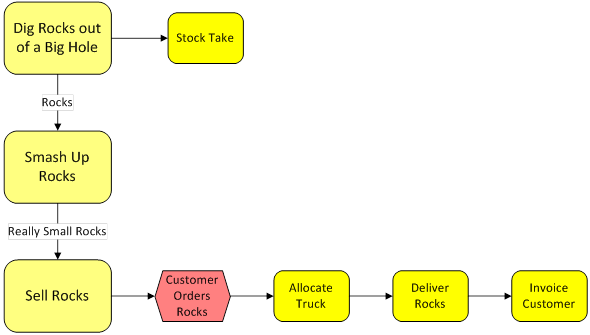 You most likely would not get much argument about that either, but at some stage, as you expand the level of detail, at some point, sooner rather than later, someone will shout “STOP – I don’t do things that way”. So, as a gross oversimplification, you could say that one level above that point is your global unified business process. I stress once again I am oversimplifying, but as you will see I am aiming this more at writing programs than project management, on the grounds that in my own mind at least I know how to write programs but have about as much knowledge of project management as a penguin has about the Large Hadron Collider.
If we move our lovely simple diagram down one level, it is going to fragment into a million different variations on the theme. How in the world can be do that?
5.     By Drinking a Cup of Coffee
The other night, I read something that I imagine most people who know about object orientated design read on their first day studying the subject. It made perfect sense to me, even if the language used is Java. Java is a lot less verbose than ABAP but a quick browse through “Thinking in Java” and it no longer seems that alien. Some Java constructs even look the same as the BASIC language I used in 1981 which is quite ironic if you think about it.
http://www.objectmentor.com/resources/articles/CoffeeMaker.pdf
Examples that everyone can understand are the strength of articles like that where the author is using the example of designing a program to control a specific type of coffee machine, and thus is talking about how in OO programming you have an intrinsic separation of core / details. I have heard this expressed as separating the “things that change from the things that stay the same”.
I think that is a perfect match for my situation, where you would want to design the whole system with the so called “best practice” logic that never changes in the middle and the gritty details of each country hovering around the outside.
·         FIGURE 3 – Separate the “core” from the country specific details

Then within a unit test you can go into detail about the WHY of what it is the program is supposed to be doing. Once again, having the methods that get excuted have names that sound like natural language is important. 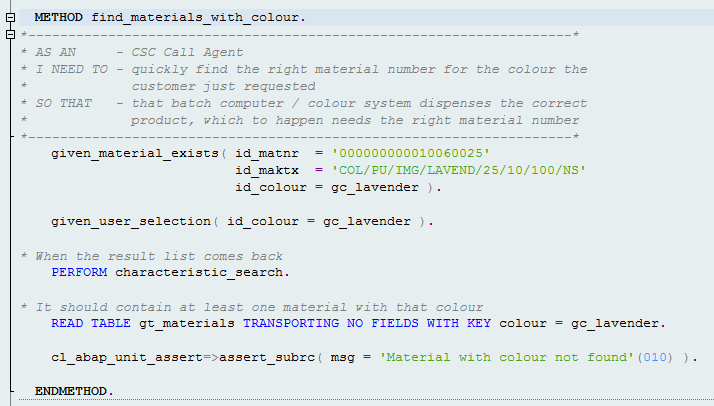 I have also read about using domain specific languages, where the “domain” is the business area e.g. ready mixed concrete in the example I am about to give, and the idea is to write code that is as much like plain english as possible, so a business expert could read the code and it would be just like they were reading the specification. That does mean breaking a lot of my normal rules, on naming for example, and words like IMPORTING and EXPORTING aren’t part of normal sentences so you would have to use global variables in the test class which fills OO people with horror, but the result does come out looking like English.

Terms like “placement method” and “patternset” don’t mean much to us programmers, but they carry a great deal of meaning to some of our concrete labroratory staff.
So now I have an idea of how to write unit tests. Where do I go looking for specifications of what a program should do?
I would note that in every project I go through I get a list of the areas that are different from what went before – because those differences had to be programmed, and all such changes were documented (weren’t they?). So for every difference the test is “can this program do THIS here and THAT there and do the correct option in the correct place”.
So in one sense you have the highest level design – which you would expect to be considered at the very start of the project – linked to what is often considered the very last step in the project i.e. testing. I stress once again that the tests are all designed before anyone has even dreamed about looking at thinking about how the requirements will be realised. This sort of backwards thinking can make certain people’s heads spin so hard they fall off. It’s like saying that the Earth rotates around the sun, and Galileo will tell you the price you have to pay for suggesting such heretical ideas.
However, if we can avoid being burnt at the stake, then using our vast catalogue of existing test cases we then build the best high level UML model in the world. There – that was easy wasn’t it? Oh hang on, there is one more thing!
9.     Design By Contract
Firstly to recap what Design by Contract is all about, here is a link to the original article.
http://se.ethz.ch/~meyer/publications/computer/contract.pdf
In essence this is defining what any given routine needs to be supplied with in order to function properly, and what that routine needs to give back in return. In the EIFFEL programming language this is part of the signature of a method.
Just as an excursion, it may seem strange that I am only learning about computer science 15 years after programming day to day in a real business environment, but I find it fascinating and am picking up all sorts of useful things. I thought the design by contract things was so good I instantly tried to work out how to apply it in an ABAP environment.
http://scn.sap.com/community/abap/blog/2012/09/08/design-by-contract-in-abap
This is another back-to-front thing. Normally you code all your checks whilst writing the actual code in the routines. Now the idea is that such checks are written first, just like unit tests, because both of them define the high level nature of your overall system.
When I was 14 instead of playing games on my 1K computer like most of my friends did, I used to read “Computer and Video Games” and see what new features had been added t games and see if I could incorporate them into the things I was writing. I have not changed in the intervening 30 year period so when I saw a concept that was alien to ABAP namely the “class invariant” I thought how can I do that?
Once you think about it, in one’s mind if not in a program, the concept of a class invariant is fairly easy to apply to almost anything. Classes are supposed to be models of the real world so after each method call you can say that certain general “house rules” must be true e.g. a lift (elevator for Americans) object cannot be higher than the highest floor in the hotel object (you would hope).
In one of my existing – procedural – programs I had added assorted unit tests in a test class and this had weeded out no end of errors. So then I thought to myself – is there anything that must always be true in this program after any operation, no matter what it is? The answer came straight back, the program dealt with grouping items together, so at any given point there must either be no groups yet, or the groups that did exist must follow certain rules like all items belong to the same customer, all items sum either to zero or within tolerance, and one or two others. I did not do anything dramatic, just added a recurring method at the end of each unit test.
Figure 4 – Class Invariant