#WCIT2012MTL Creating ONE Vision for a Global Digital Society

Spending three days at an IT conference is not something a marketer would normally do.  However, that’s exactly what I did in Montreal this week, along with delegates from over 60 countries, at the18th World Congress on Information Technology (WCIT). Apparently I’m not a “normal” marketer. This was definitely not a normal IT conference.

This conference had Youth

Winners and runners-up from the World Summit Youth Awards (WSYA) attended, and were honored for their use of the Internet and mobile technologies to help meet the UN’s Millennium Development Goals.

Social entrepreneur Nathan Muema Masyuko of Kenya participated confidently on a panel with Larry King, out-shining the esteemed group with his eloquence, and a precient response to one of King’s questions:  “The question of where technology is going is wrong, because it’s passive. The question is where you want to take it.” 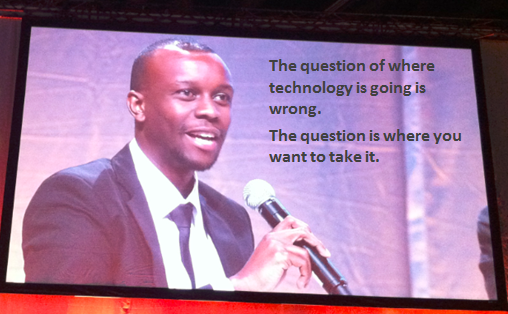 As the creator of Haki: Shield and Defend, a mobile game where players protect trees from illegal loggers, Nathan’s goal is to inspire, bring hope, and educate people on the issues of our time such as gender-based violence and sustainability.

As @conwaytb tweeted, “I’m optimistic about the future simply because of the wisdom of the young generation of digital natives, such as Nathan”. (+1!)

This conference was crowd-sourced

Prior to the conference, a platform was created for global digital brainstorming, which shaped both the agenda and content for the three-day idea-fest.

Some very influential people committed their names, time and insights to this endeavor:  the one and only Larry King (who was indeed there “live”), thought leaders such as Clay Shirky, Don Tapscott, and Roger Martin, high profile government officials, and the CEO’s and CIO’s of some of the world’s leading technology companies.

Topics spanned healthcare, education, government, sustainability, business and the economy, with the over-arching themes of leadership and innovation in the digital age.  Each topic will spin off its own articles and blogs, but my goal here is to enourage you to check out WCIT Montreal’s site, their mission, and the content (including replays) which I’m told will be published over the next weeks.  I hope you will be inpired by it.

This conference had purpose

WCIT was not just an event, but also an initiative – almost a movement.  And it was not about technology, but about applying technology to make the world run better…  although I admit to geeking out a bit when I took a walk on the digital river on my way to check out the new Ultrabook at the Intel booth.

The end goal was “to create a Global Digital Society Action Plan”.

This conference had Don Tapscott!

Don Tapscott moderated the three days, and matched each presentation with his own provocative insights.  As he did the final wrap on the event, he enacted a live version of his “Macrowikinomics Murmuration ” video, pointing out that “the technology genie is out of the bottle again”, as it was when the printing press gave us knowledge. “This is the age of networking human intelligence, an age of freedom.”

Footnote:  SAP was one of the many proud sponsors for this event, so it was personally thrilling to hear another great Canadian thought leader Roger Martin describe software not as an industry, but as “the resting place for all knowledge in the world”.  I am humbled by the brilliant minds across SAP and the ecosystem, as well as technology professionals around the world, who are at this very moment creating the future.