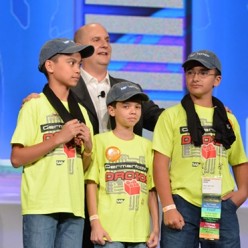 Long a highlight of SAP TechEd, DemoJam is a competition in which developers present live demos of new applications built with SAP technology. Last week in Las Vegas, the 2012 contest spurred more buzz than normal, thanks to a surprising finalist: a team of three middle-school students from Maryland, barely able to see over the presenter’s podium, were vying for the coveted Demo Jam Champion-cup. Nikola Bura, 11; Jordan Qassis, 12, and Angelo Castro, 13, all students at Roberto Clemente Middle School, presented “Food Agent,” an iPhone app that scans quick response (QR) codes on grocery products and provides consumers information on an item’s origin and ingredients.

DemoJam rules allow contestants just six minutes to present their working application. They also need to convince the audience, which judges the competition, that their entry tops the rest in innovation, viability, and cool factor. Finalists earned their way to Vegas when they were hand-picked from hundreds of DemoJam hopefuls, all (except the three kids) seasoned SAP coders. If it wasn’t daunting enough for these tweens to face such formidable foes in a contest that makes even stoic pros weak-in-the-knees, they had to compete in front of a live audience of thousands and a gaggle of cameras projecting their image on 60-foot tall television screens. And it was WAY past their bedtime.

Kids take second place, coming this close to the win

Topping the middle-school trio (but just barely) were Will Powell and Nic Doodson of Keytree, an SAP partner in the UK. Powell and Doodson presented “Store Trek,” a three-dimensional, voice- and gesture-controlled virtual shopping environment powered by SAP HANA and SAP NetWeaver. Just as Powell and Doodson’s spectacular demo deserved the win, the young boys earned second-place on the merits; the DemoJam crowd is not one to make a gift of its vote.

So while Nikola, Jordan, and Angelo may not have won the contest, they surely stole the show. 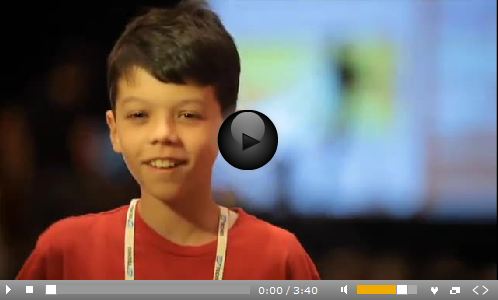 Considering most of their opponents had college degrees before these kids were even born, their achievement is nothing short of remarkable – for them and for SAP. The software solutions made by the 40-year-old company are still perceived, falsely, by some as clunky and anachronistic, suited only to big companies. The kids absolutely dispel this myth.

The significance wasn’t lost on the SAP TechEd audience. In the theater, the crowd’s wild applause was herald to a new notion of timeless software; it’s ageless too.

SAP developer John Astill mentored the boys, whom he met through First Lego League, from the idea-phase of Food Agent to its final debugging, just hours before the competition. On his own time, Astil spent months encouraging and coaching the kids toward their DemoJam debut.“If their dream is to continue in engineering and development,” Astil said of the boys, “then I think they’ve got the talent and I think they can succeed.”

For their part, Nikola, Jordan, and Angelo gave tweens everywhere a good name, and that’s no small feat. They handled themselves with dignity and grace in what would be a challenging situation at any age.

As word spread about their DemoJam appearance, the boys became instant SAP TechEd celebrities. A film crew followed their every move for an entire day. SAP Executive Board member Vishal Sikka spoke of them in his keynote. “These three kids, they built an application, and they built it on SAP NetWeaver Cloud,” Vishal said. “This is an extraordinary example of what the future holds.” 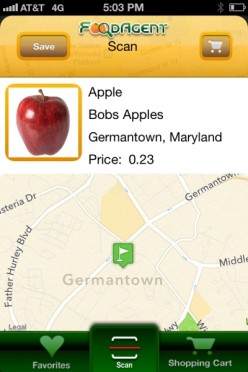 After his speech, Sikka took time to meet the boys, as did SAP Co-CEO Bill McDermott, who  shook hands with the lads and then passed along his business card. “We’ve got to stay in touch,” he said. “When you guys become lead developers or CEOs, don’t forget your friends, alright?”

All the attention didn’t seem to faze the Germantown crew; given their aplomb, you’d think these boys were whisked around business conferences, film crew in tow, having tête-à-têtes with powerful C-level software execs – like – all the time. Backstage before the show, I asked Nikoka if he was nervous at the prospect of presenting a live technology demo in front of a huge crowd. He barely looked up from his smart phone, on which he was playing Minecraft, to say. “Nope,” simply and without a whiff of hubris.

As comfortable as they were in front of the cameras and in the company of corporate leaders, Nikola and Angelo   were even more at home on the SAP TechEd main stage. (DemoJam rules prohibit more than two presenters, so Jordan cheered his teammates from the audience.)

Nikola was particularly composed, effortlessly smoothing over flubs and peppering his presentation with impromptu jokes that were actually funny. Though he had to stand on a stool to be visible behind the podium, it was easy to see Nikola has charisma  befitting a future technology leader. So at the end of the presentation, when Angelo quipped, “If anyone at SAP Retail would like to offer a scholarship …” some in the crowd may have been thinking more along the lines of a job offer.