What a Race We Had in Las Vegas!

If you caught the events of last week, either in-person at SAP TechEd Las Vegas, or online, you might have heard about the SAP HANA Real-Time Race. An exciting time was had by all, as two leading SAP Partners, Optimal Solutions and Bluefin Solutions, teamed up with hardware partners Cisco/EMC and IBM, to perform a BW/BPC migration to HANA. The dataset was from a live customer’s system, and the customer had complete say in determining the winner.

And lest you think this was nothing more than a geeky technical exercise, let me tell you, it was much more than that! Bluefin and Optimal were out to solve a real business challenge put forth by the customer. The solution required a migration to HANA, a revamping of the restatement process in BW/BPC, and visualizations on mobile devices, and each team was judged on how well their solution met the business challenge.

It was a LOT of work to pull this off, but a lot of fun as well. The Optimal and Bluefin guys were working day and night the week leading up to TechEd, as well as through the event itself, to get everything prepped, and to resolve “little” technical glitches that came up, and ultimately to put on the show. I want to thank each of them here, and please join me in giving these guys some appreciation for the massive effort they put into this event.

The first team consisted of Bluefin Solutions, a consulting partner based in the UK, using a 4-node, 2TB HANA appliance from IBM.

I have to give a lot of credit to the Bluefin team, as they were the first to take us up on this challenge, even when they could have been pitted against any of the largest firms in the world. They were unfazed by this of course, having had as much experience with SAP HANA as any people on the planet, outside of SAP.

And, while I’m at it, special thanks to John Appleby from Bluefin, who spent many hours helping to construct this challenge before we even had anything we could approach another SI with, much less a customer! This could not have happened without his involvement. 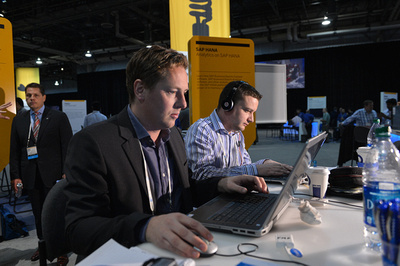 The team consisted of:

With logistical, and a bit of technical, assistance from IBM:

The next team was Optimal Solutions, an Irving, Texas-based system integrator, who partnered with Cisco/EMC on their brand new 4 node, 2TB scale-out appliance, which only became generally available the Monday prior to TechEd! Despite many other firms passing down the chance to take us up on this crazy race idea, the team at Optimal, fresh off their win at the SAP BusinessObjects User Conference Dev Wars competition, was ready for more action, and they came to win! 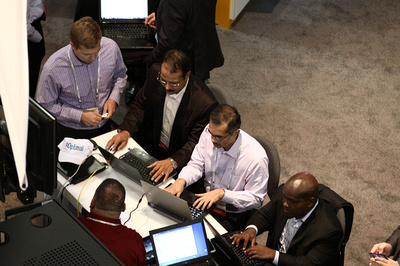 The Optimal Solutions team consisted of:

I would also like to say that I had the pleasure of many calls with Leon Reznick, SAP HANA Practice Director at Optimal, who has a wealth of experience with HANA, and lots of hands-on customer experience with SAP BW on a variety of platforms. He was the first person at Optimal to volunteer for this event, and I appreciate his involvement and input in the structure of the challenge itself. 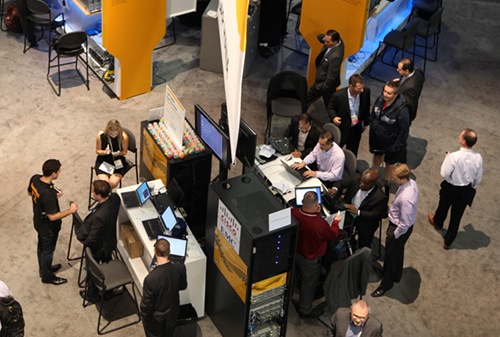 Of course there were countless others that lended a hand as well. Even Irfan Khan, CTO of Sybase, stopped by and showed he still has his technical chops by helping with some tuning. Not to mention all those that came by to see what all the fuss was about, including many customers, partners, SAP Mentors, and even our own co-CEO, Bill McDermott!

And we even had people all over the world participating on twitter, cheering on their favorite teams with the hashtag #HANARACE. Bluefin won the tweet race handily, but that was just for fun.

So, who took home the big prize, you ask? Let me tell you, it was close! So close, that the judges decided to award two winners. Optimal Solutions won the overall challenge, with the edge on BPC restatement processing and outstanding visualizations, but the judges asked to also recognize Bluefin Solutions as the winner of the HANA migration itself, having executed this faster and with better performance.

In the end, Sam Sliman, President of Optimal Solutions, put it best: the customer walked away with the win. Not only the customer that participated in the race, but all of the customers that stopped by to see just what is possible in such a short period of time with talented teams, great hardware, and SAP HANA.

For more information, watch our TechEd Live video as I talk with the Optimal/Cisco/EMC team about their big win in the SAP HANA Real-Time Race.

P.S.: special collegial shout-out to both the Bluefin and Optimal technical teams for working really well together, sharing results and achievements along the way in the lead-up to this event to make sure that each team started at the exact same place once the challenge kicked off. It was their joint cooperation and sense of fraternity that really made this event a success.

P.P.S.: thanks of course to the SAP team, too many to mention, that provided support for this. Some of those on-site were Dorothea Sieber, Amit Sinha, Jennifer Lindstaedt, Julia Busalt, Jeff Word, and more.