The dream….SAP as the knowledge company

Vegas was ablaze with activity last week, but then again, when isn’t it?  Last week it hosted perhaps an unexpected convergence of two worlds – the techy developer types attending SAP TechEd, and the professional services folks attending the Technology Services World (TSW) annual conference.  The venues were staged literally across the street from one another, joined by a walking bridge affording safe transit between the two.  And who better to bridge the divide between these two worlds as the TSW keynote speaker, SAP’s own co-CEO, Bill McDermott. 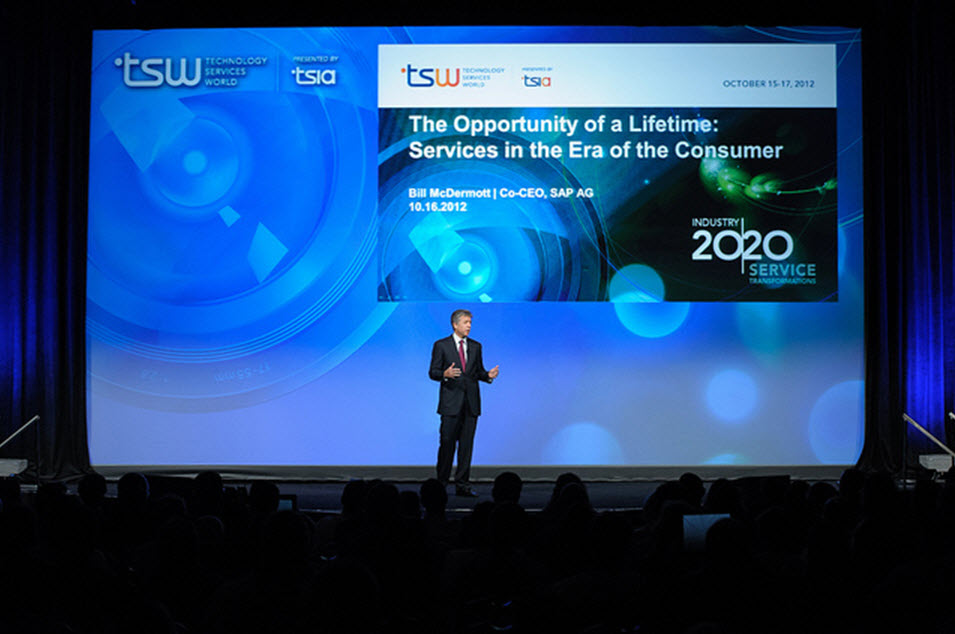 In way of full transparency, I have to admit that I am a big fan of Bill.  I came to SAP just months after his arrival as the President of SAP North America.  His passionate leadership style along with a fast-paced culture of accountability and customer focus was transformative.  I knew I had made the right career choice.

Okay…with that being said let me continue.

Perhaps there were some in the audience wondering how this technology leader would offer insight into the world of professional services.  If anyone was wondering, it wasn’t for long.  Bill cited the one undeniable thread that binds all business models together – people.

Leading his conversation, Bill pointed to a recent USA article entitled Passion or Knowledge, which concludes that passion can offset competence.  He encouraged the leaders in the audience to master the talent challenge – chose good people and offer them honest feedback so they can become great.

Interestingly, a recent article in CLO Magazine by Ken Blanchard was entitled Passion Promotes Profit.  In his article, Blanchard suggests that “Passion is the applause you get by taking care of your customers and creating a motivating environment for your people.”  The balance of Bill’s keynote fit neatly into Blanchard’s theory.

Bill shared the story of when he became SAP’s co-CEO, and he asked himself and the leadership team, “Why do we matter?”  They concluded that the only way to truly matter was to have a devotion to the total customer experience.

As Bill put it, with social as the new dial tone, and big data as the new encyclopedia, we (both the technology providers and the service providers) need to put the consumer at the center of all we do.  This consumer revolution inverts the design process, and Bill suggests that the days of generic solutions are over.

Here again was an SAP executive evangelizing the importance of the user – sweet music to my ears!  But the cherry on top of the sundae was one of Bill’s closing remarks – “My dream is for SAP to be the knowledge company.”  From my seat within SAP Education, all I can say is Amen!