Q4 2012 will see the release of Visualization Solutions by Nakisa 4.0 and with that will see the release of Nakisa’s first mobile solution: Nakisa OrgHub™ for Mobile. Nakisa have finally evolved their 2 prototypes into a full-blown OrgChart mobile app that leverages the configuration and customization in the “desktop” application that is operational within the client’s environment.

The big news for customers who wish to implement or upgrade to 4.0 and use the OrgHub for Mobile app is that they will not need the SAP Gateway infrastructure that is required for SAP’s standard mobile apps. The other news is that the app can be enabled with a simple configuration checkbox in the AdminConsole, with no other configuration or customization required.

OrgHub for Mobile is aimed at all SOVN OrgChart users and will be available for the Apple iPad (and therefore available via iTunes). It leverages all of the existing configurations that have been made within the application, but in additional it also leverages mobile device functionality such as recognizing the language of the device or opening the Mail app when clicking on an email address hyperlink. As you can see from the screenshots, the shipped theme differs from the desktop version and takes advantage of the slick screen that the iPad offers. 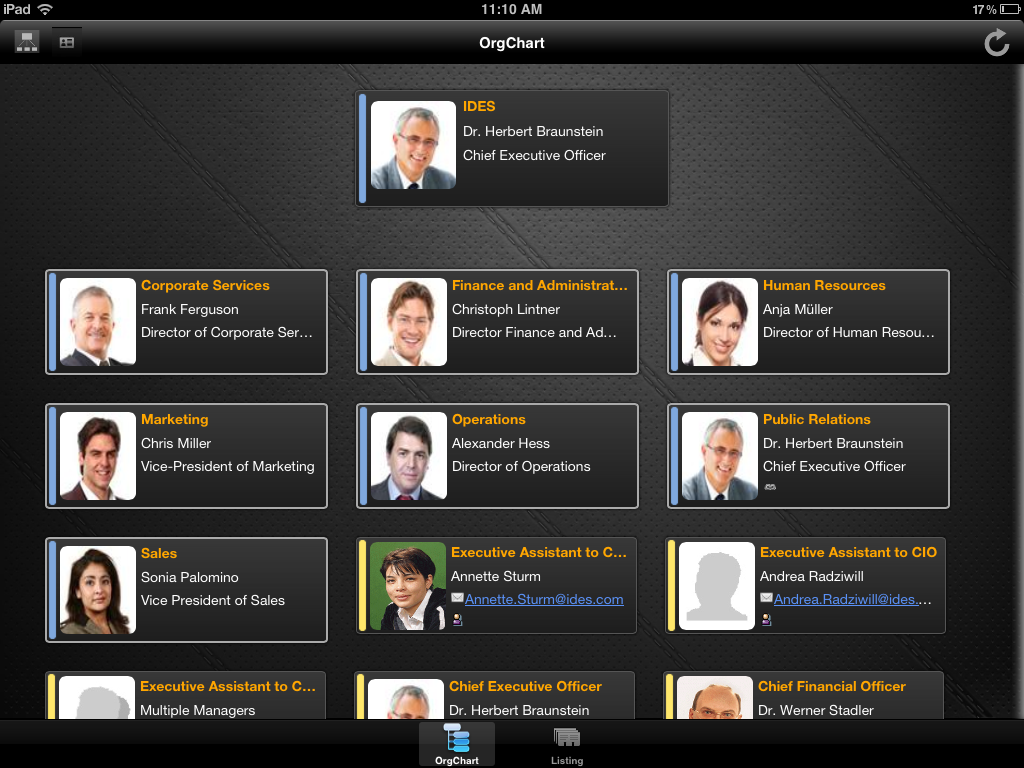 The layout of some features differ from the desktop version, such as the modules being located at the bottom of the screen and tabs on the details panels being at the top of the screen. This is an intentional design decision in order to optimize the user experience specifically for mobile use. Despite the layout changes, even casual users of the desktop application should be able to use the app with little or no additional training. Having used the application myself, I found it even easier to use than the desktop version. 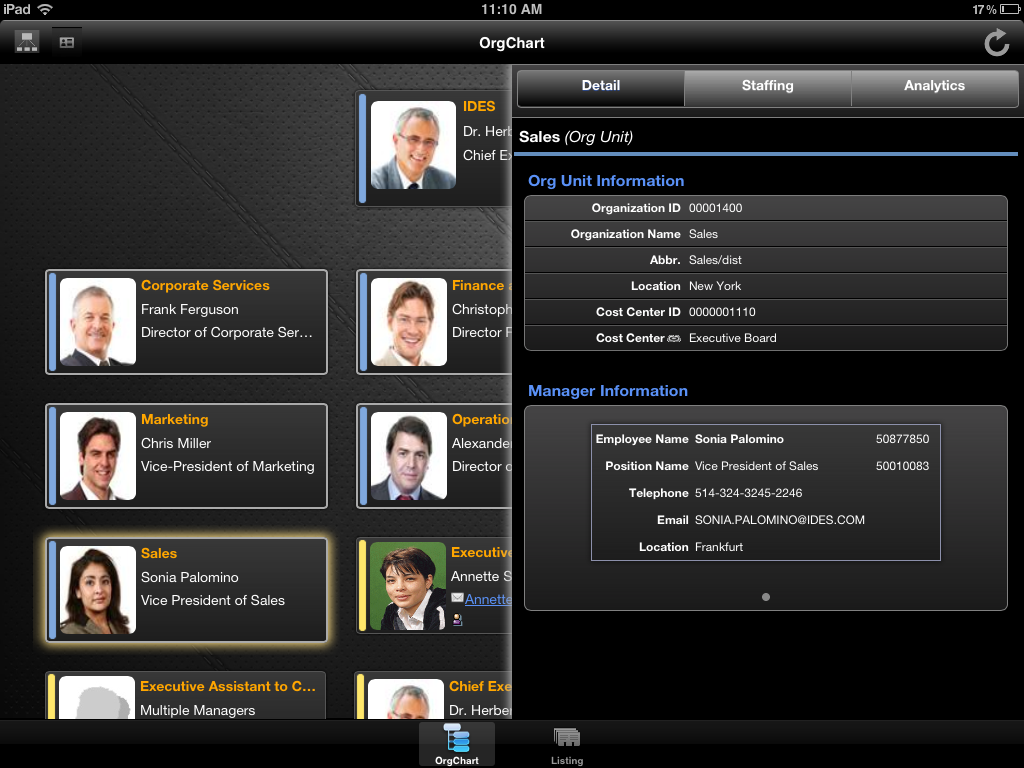 The graphics for some features, such as the analytics and tables, have been altered to reflect the difference in system architecture of the iPad. 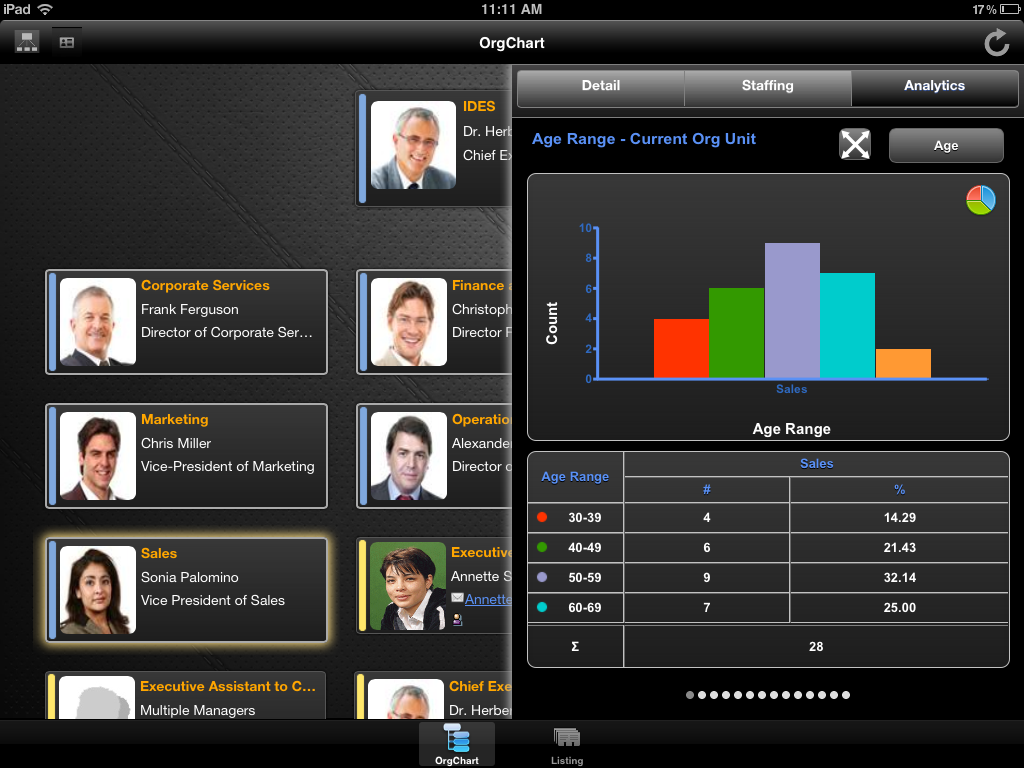 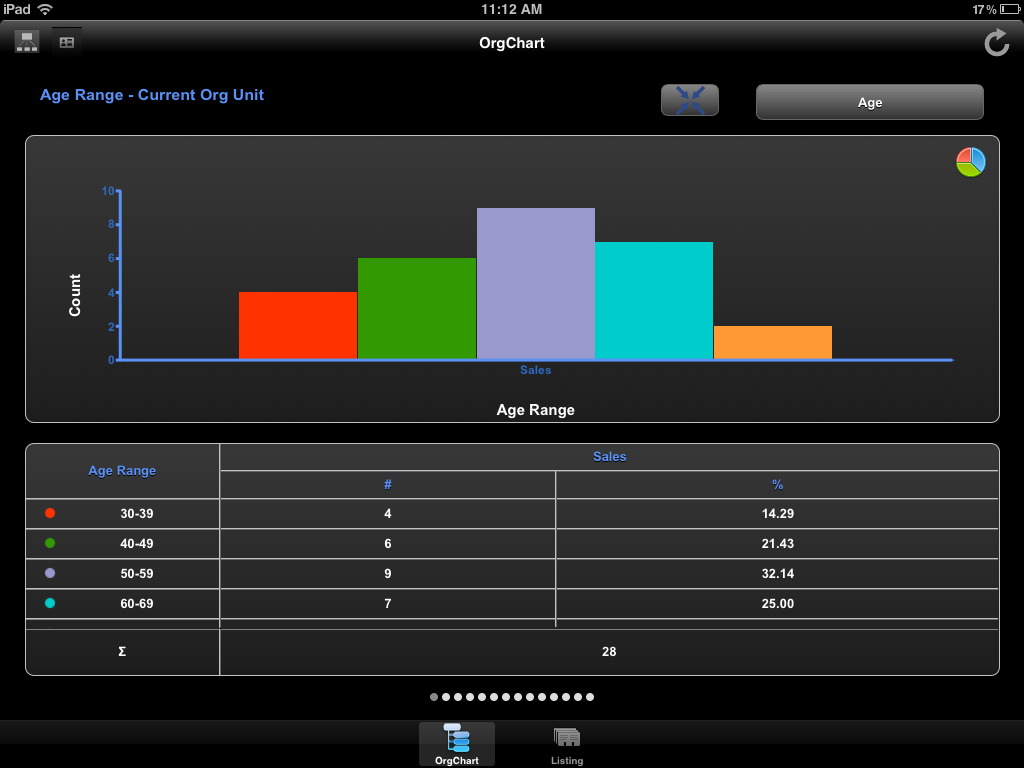 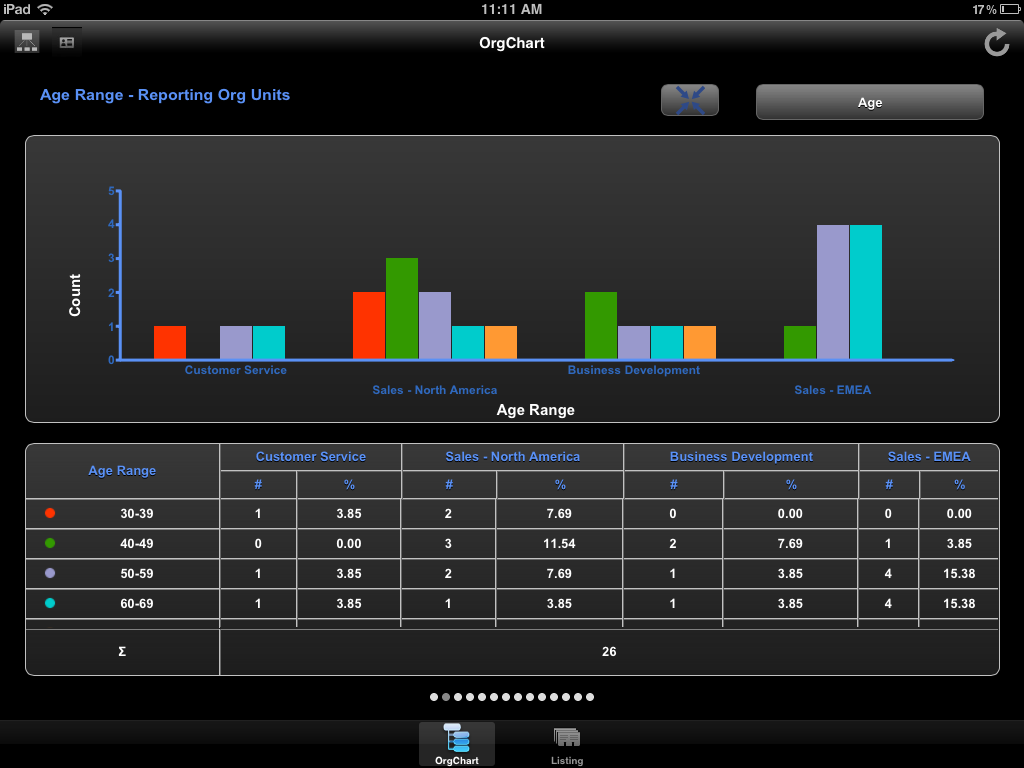 So, what are the gotchas with the app? True to form, there are some catches – but nothing that I think are significant impediments. Naturally there is no print or export functionality and there are no Styles for changing the layout of the chart. The SocialLink module is under development and will be included in a later release. 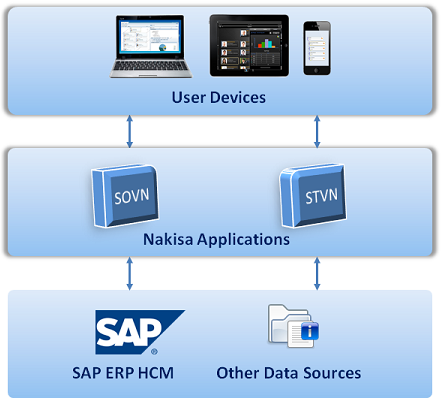 Right now the app is available on the iPad and requires the iPad to have iOS5 or above. A deployed and configured version of the SOVN OrgChart 4.0 application is required. Since the app leverages the SAP backend and role-based security then there is a license cost. The app is only available from Nakisa (and from SAP) and will cost $10 per user (one-off fee), in addition to the standard OrgChart license. The app will be free to download from iTunes.

Since the app is built in HTML5 it is platform agnostic and can be ported to other platforms. Nakisa plan to make versions available both for Android devices and PlayBook, although there are no definitive release schedules. I do know that Nakisa have been working on a demo for PlayBook and this seems to be working well based on initial tests.

Nakisa are committed to providing mobility options for all of the “desktop” applications while continuing to extend the functionality available in the existing app. While there are no specific plans afoot, Talent Management is the likely focus of the next mobile app to follow OrgHub for Mobile.

There is a big gap in the market for SAP mobility solutions and OrgHub for Mobile offers organizations the opportunity to provide the org structure and related data to HR professionals, managers and employees while they are “on the go”. Due to the flexibility of the SOVN OrgChart application it could be possible to leverage OrgHub for Mobile to display data that might otherwise require an SAP app that relies on the SAP Gateway infrastructure.

The major downsides are the need to upgrade to SOVN OrgChart 4.0 (although not a major task) and the fact that a corporate WiFi or VPN connection is required. While I can’t comment on how widespread corporate VPN is for iPad’s, many organizations will need to evaluate the benefit of upgrading from a previous version of SOVN OrgChart to 4.0. However, for organizations that are using SOVN OrgChart 3.0 SP2 or a previous version then undergoing an upgrade to take advantage of improved performance and stability should be a no-brainer.

Introducing the OrgHub for Mobile app is a big step forward for Nakisa and when they finally introduce a TalentHub for Mobile app then they will be able to deliver greater value for SAP customers while also providing continuous access to important talent data to those individuals who are always on the move.