Is social media here to stay?

Is social media here to stay? Is the learning paradigm really shifting? These were the questions bouncing around in my mind as I settled into my seat in the large keynote venue at SAP TechEd 2012 Las Vegas last week.  Prior to that day, Clay Shirky was an unknown name to me, but I now waited with great anticipation to hear his theories on social media.  A professor from NYU and author of a book that even sounds super smart, Cognitive Surplus, surely Mr. Shirky would shed some light on my loosely compiled questions. 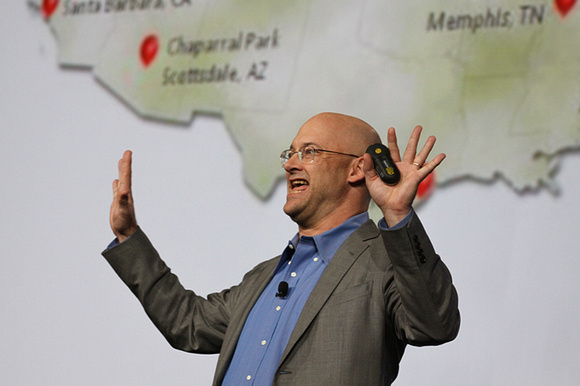 Any good subject worth discussion should have an understandable definition.  Shirky began his narrative by offering one for social media – “Group action just got easier.”  Perfectly succinct yet full of meaning.  I could not think of a better way to describe this elusive topic.  Perhaps that is why he is the professor and I am not!

A skilled storyteller, Shirky led us through some poignant examples of how social technology radically changed outcomes.  One such story involved a bank (HSBC) that offered penalty-free checking accounts for college students, but then rescinded the offer.  Furious, the college students united on Facebook and planned a large protest in London in front of the HSBC office.  The bank caved and gave them back the penalty-free checking services – apparently a public protest would have been more costly to HSBC.  Each story underscored the power of social technology – allowing customers and parties of interest to rapidly coordinate their views.  Nothing is more dangerous than unhappy customers that are also instantly coordinated to take action.  His synopsis…..”Things change when impossible problems become trivial.”

So, back to that super smart book, Cognitive Surplus.  What does that really mean?  Luckily, I didn’t have to wait long for an answer.  Shirky explained that cognitive surplus is when people commit their talents to a joint problem with a network to collaborate.  He pointed to Wikipedia as a prime example.  According to Shirky, it took 100 million hours of human thought to create the current content of Wikipedia – a staggering endeavor by anyone’s standards.  This was quickly contrasted when Shirky quoted the amount of hours spent watching TV each year in the U.S. alone – 200 billion hours!  His point: clearly we have an enormous cognitive surplus to harness.

It seems plausible, based on Shirky’s remarks, that social media may be here to stay.  But does it impact learning as we know it today?  Schools and corporations predominantly leverage classroom style learning, with real life practice happening outside the classroom.  Hoping to get further into this unanswered question, I was delighted with Shirky’s next observation summarized as “People like to consume, produce, and share.”

Shirky cited the example of how accountants were responsible for introducing PCs into the workplace borne from their hatred for the limitations of the mainframe, which required long lead times for number crunching and financial results.  By bringing in their own PCs equipped with spreadsheet applications, accountants were able to not only accelerate the time it took to crunch the numbers, but ultimately it offered them the ability to begin to model business results.  Key point of the story?  It was end users who drove the shift in the business technology paradigm – not corporate directives.

Perhaps this technology shift was a precursor to the learning paradigm shift that I feel is well under way.  Shirky mentioned the extensive use of Stackoverflow.com by technical professionals seeking rapid answers to advanced technical questions – a minimum response time of only 11 minutes!  When given tools to collaborate, knowledgeable people seem anxious to help make others smarter.

Of course, to even mention knowledge transfer in an open collaborative venue such as social media immediately brings most of us to a panic about quality control.  In a panel discussion later in the evening at SAP TechEd attended by Shirky, Mark Yolton, senior vice president of SAP Communities and Social Media, Sameer Patel, global vice president and general manager of SAP Social Software Solutions, and Josh Greenbaum, principal, Enterprise Applications Consulting, Mark Yolton testified to the effectiveness of crowd source curation within SCN.  The basic tension of all social forums is that the group will be held hostage to the stupidest or most aggressive person in group.  Agreement amongst the panelists suggest that proper governance, and holding participants accountable (such as the point system within SCN) is a sure fire way to avoid becoming a hostage.

In a recent study entitled Education 2022, co-authors John Mayerhofer and Alex Zhu, both from SAP, evaluated the future of education.  They provide a model that outlines the pathways to learning, stressing the growing importance of social learning.

The core of their message is that the power is shifting to the learner, and technology is the enabler.  Said differently, people want to learn professionally as easily as they learn personally which is empowered by social networks along with formal learning outlets.  Perhaps this is evidence enough to conclude that the learning paradigm is shifting.  Best said by the authors of Education 2022, “Social networks form the basis for learning networks, and over time, they will make learning, assessment, and certification easier.”  As always, time will tell.  In the meantime, SAP Education is getting ready for the shift.