TechEd just came to an end and so I find myself decompressing from all the exciting stuff that happened the last couple of days. And while Vegas sure is always worth the trip and known for putting up a good show, this year we definitely had more than just one first-of-a-kind moment. But let’s take it easy and tell the story as it happened…

In his keynote on Tuesday morning Vishal Sikka presented SAP’s vison of the SAP HANA Cloud Platform, a platform that combines the speed and parallelization capabilities of SAP HANA and the ease of use and scaleability of the Cloud. Or in Vishal’s own words:

“[It is a platform that enables customers and partners] … to build applications that meet the needs of the new reality – lightning fast, instant mobile access, deep analytics with delightful user experience.”

It’s more than just a vision, though. It’s tangible! Because as Vishal continued:

“Putting SAP NetWeaver Cloud into the hands of developers today is a far-reaching first step toward that vision.”

With SAP NetWeaver Cloud (aka NEO) this vision is already a reality – NetWeaver Cloud is GA (= General Availability)! Those who watch SAP very closely have surely heard about this open, standards-based and modular platform a while ago, yet it may be safe to assume that many others got aware of it just now. Hence, with this blog I would like to introduce you to the new companion of our first lady (HANA.) 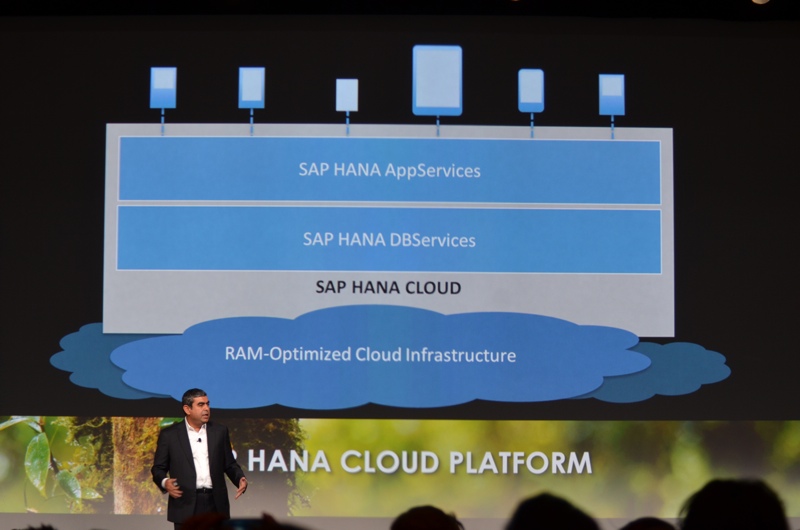 HANA and NEO – The Perfect Couple

I apologize up front for referring to NetWeaver Cloud as NEO, yet as Vishal confessed during the Influencer Q&A session that followed the keynote: “It’s hard to not call it NEO“. (Especially, as we keep referring to HANA as our “little girl“.)

Anyway, the two are a perfect match as their individual characteristics complement each other. HANA, on one hand is lightning fast and capable of some serious multi-tasking, while NEO on the other hand is very approachable, easy to get to know and open-minded, in short: a jack-of-all-trades, if you will.

The way Vishal explained it, the SAP HANA Cloud Platfom comprises of the following components (bottom-up):

Well, personally I feel the term “AppServices” is rather broad, and hence I hope the marketing department will take it easy on me if I refer to it as a runtime container with additional platform services/capabilities on top. I feel that may make it a bit clearer for the techies around.

So, let’s break this up and talk about how SAP NetWeaver Cloud – as the frontrunner – fits into this picture. 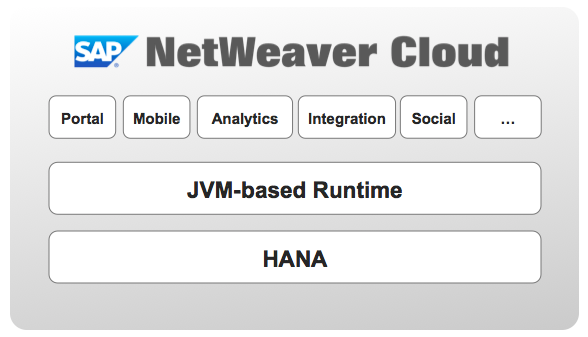 Bring your own Language*

From a technical perspective we are talking about a JVM-based Platform-as-a-Service solution build on open-standards and Open Source frameworks/libraries. As I mentioned in a previous blog post I wrote for SAPPHIRE NOW in Orlando, one particulaly interesting and charming aspect of this approach is that a JVM-based platform supports a multitude of languages and programming models.

In general, everything that compiles to JVM byte code could be run: JRuby, Groovy/Grails, Scala, Clojure etc. Of course, it’s also possible to use the popular Spring framework and some community members already used server-side Javascript frameworks (e.g. Rhino) on NetWeaver Cloud. As such, this openness goes hand-in-hand with SAP’s ambitions to reach out to and attract as many developers as possible. Instead of being forced to use a particular language or programming model, they can simple use whatever they know or whatever they prefer. Or, as I heard Dennis Howlett referring to it in his interview with Vishal just the other day: for developers this translates to “bring your own language!” [Source]

Of course, NetWeaver Cloud sits on top of HANA and hereby providing the full power of in-memory computing with the convenience and ease-of-use of a Cloud solution. Developers can access the database via the so-called Persistence Service, which adheres to the as-a-Service paradigm. Hence, developers do not really need to know nor care about database configuration etc. as the respective schema for an account/tenant is automatically provisioned to them. Worth mentioning that all of this is done in a standardized way, so no proprietary configurations or look-ups required. (I’ll talk about that aspect in more detail later on!)

There are plenty more services within SAP NetWeaver Cloud that makes developer lives easy such as the Connectivity Service (which provide means to access backend systems in a secure manner), the Identify Services (which enables setting up federated identity management and single sign-on scenarios), a Document Service (to access enterprise content management systems) and so forth.

On top of this runtime, SAP will introduce additional capabilities to address the common needs of applications such as mobile support, analytics, integration engines and collaboration tools. One of these capabilities has been launched in conjunction with NetWeaver Cloud this week: the SAP NetWeaver Cloud Portal, which simplifies the process of building appealing, mobile-enabled websites that connect applications, reports, and unstructured content from many sources. 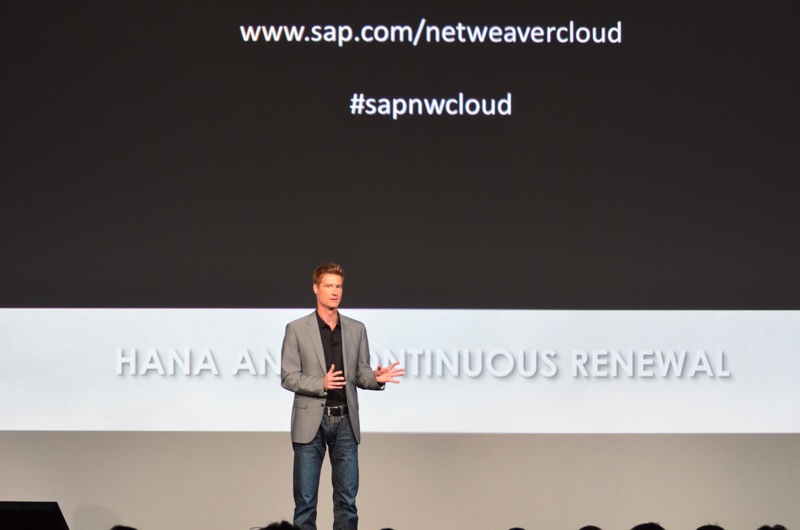 But let’s get back to the story… we talked about Vishal’s keynote: NetWeaver Cloud becoming general available was not the only news of the day! Matter of fact, Vishal asked Bjoern Goerke to get on stage and share the good news: SAP now offers free perpetual developer licenses! Yes, you heard right… not limited in time… and free (as in beer!)

Everyone can get his own free developer license at our Developer Center. Depending on the speed of your network and whether or not you have Eclipse installed it may not take longer than just a few minutes. I recorded a video a while ago that walks you through the steps required…

So, as you can see there are no excuses for not giving it a test-drive, matter of fact, as Björn stated so eloquently in his closing part of the keynote:

“So SAP NetWeaver Cloud is here today. You should get a trial account. If there are three things I want you to remember, it’s try it out.”

On that notice, I’d really want to send a hat-tip and kudos to Anne Hardy and the whole TIDE team. You’ve been instrumental in getting to this point!

All Good Things Come in Three’s

Now, finally being in GA status and having free developer licenses would have been more than enough to keep an Evangelist happy for a while, yet the best is still to come. TechEd wouldn’t be complete without Demo Jam. Ever since Craig Cmehil invented the idea of running a competition in which developers would have just six minutes to wow their peers in the audience by showing cool demos (no slides!) the event became a highlight of TechEd events and must-attend session!

We had some great contenders again, but one group certainly stood out and saw standing ovations as they ended their demo. They call themselves the SAP Droids and they showed an application called Food Agent, which is a mobile app powered by SAP NetWeaver Cloud that allows to check the origin (and potential contamination) of food scanned in a local grocery store. Nothing to extra-ordinary you may think, well, then let me tell you that Angelo Castro and Nikola Bura are 11 and 13 years old. Right!

Now, you have to see this in order to believe and acknowledge, so without further ado, here’s the link to their presentation: Demo Jam Las Vegas – Food Agent

And because one can hardly get enough of these kids, here are two more videos (as I said, all good things come in three’s):

They ended up second place, but they were for sure the real winners of the competition!

The team that walked away with the trophy were the guys from Keytree who awed the crowd with their “Store Trek” demo. In a nutshell, they created a very immersive home shopping experience by using a Kinect to walk-through a virtual 3D model of a grocery store. The whole app is using SAP HANA … and SAP NetWeaver Cloud of course! To be fair, the demo was rock-solid and impressive and they deserve winning this one. 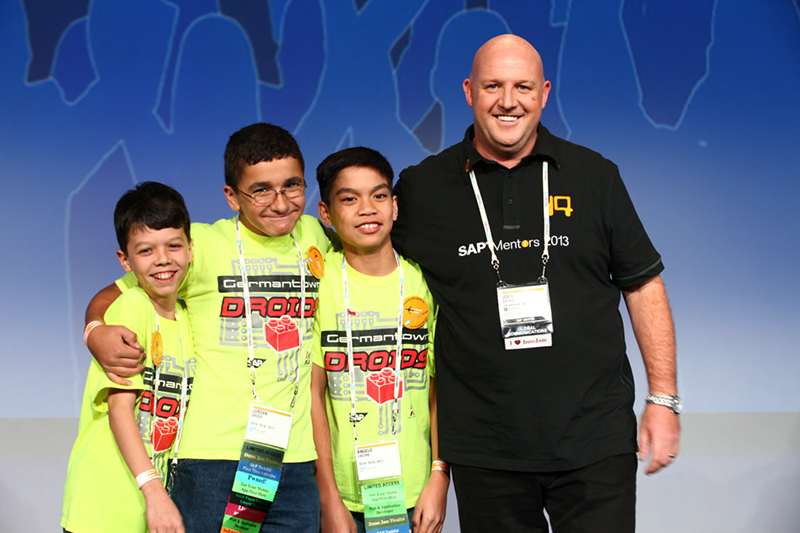 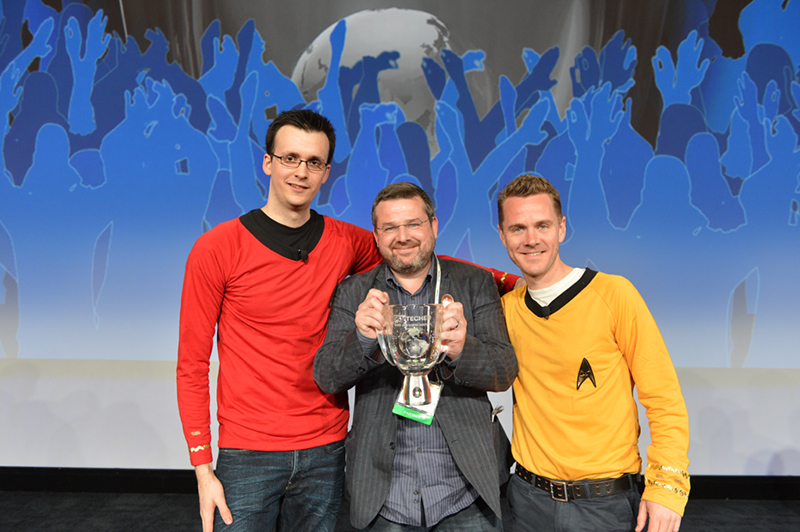 If we look at it from a technology perspective the winner was no other than NetWeaver Cloud. Not that I was surprised… matter of fact, I predicted it (without the help of predictive analysis running on HANA might I add!)

How did I know? Well, I witnessed the same at our internal Demo Jams at DKOM, the cool kids use NetWeaver Cloud. Hence, the way I see it, it’s simple: if we were able to win the hearts of developers at SAP itself – which probably is the biggest ABAP shop you could think of – then it should be doable within the ecosystem and beyond as well. Don’t you think?

Still, not convinced? Well, in part II I’ll talk some more about three good reasons why you should be: ease of use, speed and openness. We already touched upon some of these topics, but we barely scratched the surface yet….

Well, before I call it a day and crash out I’d really like to wrap this one up with a BIG SHOUT-OUT to the development and product teams in Walldorf, Sofia, Israel and Palo Alto, the GTM colleagues, SAP Research and last, but not least the marketing team! We’ve come a long way together and we made NetWeaver Cloud shine this TechEd. Really looking forward to even top that as we approach Madrid… this is just the beginning!