The IDoc/RFC/Proxy methods of communication can be used during SAP and PI integration. Generally The IDoc is the standard mechanism for sending data from SAP system to PI System if they are available. The change pointer need to be activated on the respective message type. So that the data can be flown from SAP to PI.There are some situation where the standard IDoc might not be satisfying the requirement that it should be triggered during any changes on masterdata or transactional data in SAP.

There is an alternate method to send the data from SAP system to PI system. Here the touch point is proxy mechanism and the triggering mechanism for this proxy would be BADI in SAP.

The BADI will be triggered during the changes in the contract period changes in SAP.

The process is explained by taking the example of sending the data during the contract validity periods for the vendors in SAP.

Step 2: The proxy is generated in SAP (SPROXY). 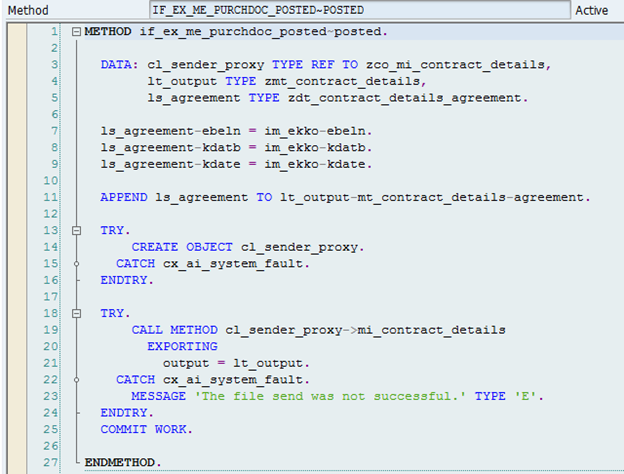 The validity start and end dates are changed of this contract.

The BADI will be triggered first after saving the transaction and the proxy is called from the BADI and the data is flown from SAP to PI.

Conclusion – The BADI is one of the methods to trigger the outbound proxy.