The Challenges of Being Disabled in South Africa

Mamelodi used to be the main black township near Pretoria in the days of apartheid, set amidst rolling hills some 20 kilometers (12.5 miles) northeast of the city. Most people outside South Africa know Mamelodi as the workplace and home of the Reverend Nico Smith, a white minister who fought against apartheid during its most infamous days in the late 1980s. (Smith and his wife were the only whites in hundreds of square miles to have received permission to disregard the Group Areas Act, a law that mandated segregation.)

Today Mamelodi has a population of approximately 2 million and is part of the Tshwane Metropolitan Municipality, which includes Pretoria. On a beautiful sun-drenched morning, Nathalie, Philipp and I headed out to meet first hand some disabled people who lived in Mamelodi and were planning to start a workshop for themselves. We were accompanying two social workers, Maria Maponya and Boitumelo Ntamela.  Maria and Boitumelo were both achievers themselves – both had young children, but had simultaneously worked and put themselves through school. “Even as a kid, when people asked me, I said I wanted to be a social worker,” Maria told us.

As we drove towards Mamelodi, we heard about some of the challenges people with disabilities face. Maria and Boitumelo told us that families of disabled people were often ashamed of them, and treated them badly. Occasionally, they were abused. Today the South African government provides a person with a bonafide disability a monthly stipend of 1200 rand, but that was not enough to survive. We also learned that some qualified for special housing.

After we left the main road in Mamelodi, we turned next to the hospital (which has one of the largest AIDs hospices in the nation), and crossed a rail bridge. And then we were in the township. Simple block houses with tin roofs were everywhere; there were no paved roads; and the red lateritic soil glowed warmly in the sun.  You could see garbage spewed about. We were reminded of Soweto, which we had visited over the weekend. Only this particular township didn’t seem as crowded. The area we were visiting was called Nellmapius. (Mamelodi, like Soweto, seems to be a collection of townships.) 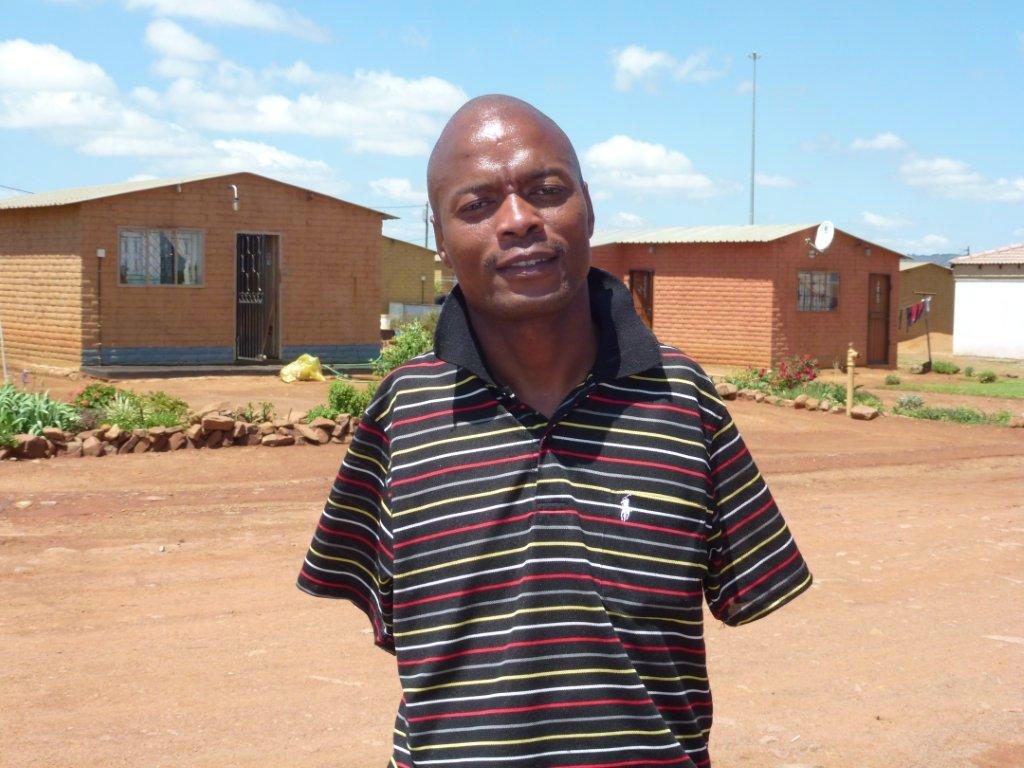 Sammy Msana, who was born without arms, taught himself to use computers. Photo: Philipp Koenig, SAP AG

They were waiting for us – Johnnie and John and the two Ezekiels. Sammy, Pauline and Michael arrived soon after and, before we knew it, we were all sitting around outside Johnnie’s simple home, chatting in a circle. They told us their stories – how they had become disabled.

Sammy Msana was born without arms. He has put himself through computer school (he uses his legs) and even did an apprenticeship. “They treated me like a king,” he said. But after his apprenticeship was over, he didn’t get an offer. Officially, South Africa has a 25 per cent unemployment rate. In reality, we were told, the unemployment was much higher, closer to 40 percent. With such high unemployment, the disabled were at a particular disadvantage. For every disabled person who wanted to work, there were many others who needed no accommodation in the workplace. (This is why places like Employment Solutions for People with Disabilities are so important; one understood yet again the significance of the 800-person waiting list at Employment Solutions.)

Johnnie Matsaba and John Lefawane (Lefawane means “chicken wing” and the others kept kidding him about that) had both been injured in car accidents. Matsaba had been a filing clerk before he got injured in 2002. Lefawane had been a security guard before his accident in 2005. Today both were without jobs. Along with the others, they were hoping to start a workshop that produced leather belts and key holders.  They were also debating starting a workshop making tissue paper, but the price of the hydraulic paper press was beyond them.

Michael Baloyi, who was blind, explained, “We want to achieve, we want to help ourselves and survive. We want to get more skills.”  Michael, who seemed to be the most educated amongst the group, took on the role of the group’s spokesman.

“We find in difficult to help ourselves. We need assistance everywhere we go,” he said. Buildings and houses hadn’t been built for people with disabilities and so someone needed to accompany them wherever they went.  Even with the government stipend, things were difficult, because a trip to the doctor cost twice as much in transportation for two people. Wheelchair-bound Ezekiel Sethlako was particularly angry with taxidrivers. Taxidrivers exploited them – whenever they saw a disabled person, they would jack up rates or do things like charge for the wheelchair.  Even if there were laws against such behavior – and no one seemed to be sure – they were not implemented.

Michael had been a student at the University of South Africa, studying public management. He had a scholarship from the government but the funds didn’t get disbursed. As such, he dropped out after his second year, he told us.

While they waited for money for their workshop, the group helped each other as much as they could. Ezekiel Khosatla had limited vision. He couldn’t see far. But he could see well enough to push a wheelchair. So he pushed his wheelchair-bound friends around. And there were small signs of hope. Pauline Matsimela, who suffered from dwarfism, had found a weekend job as a waitress in a restaurant in Brooklyn, a well-to-do precinct of Pretoria.

It was time for us to leave.  We shook hands all around. They waved goodbye.  Just before we got into the car, Sammy, who types with his legs, gave us his email address and told us to stay in touch.

Thanks for sharing both their challenges and their hopes - I am really touched by your blog.  Best of luck as you continue on your project to assist the Employment solutions organization - I am looking forward to learning more.  Your blog put me right in the circle with you all - Thank you!

Hi - my name is Meg and I am a television Producer from the UK. I am trying to get in contact with the journalist who wrote this article as we are making a documentary series for National Geographic and I would like to talk to the journalist about this. I would really appreciate it if you could pass on my email address meg.barnard@dragonfly.tv