There are a few misterious objects in PI which behave in a different way than others. Software Component is for sure one of them. You create them on the basis of data from SLD but you also remove them in non ESR typical way. Most objects from ERS once deleted get into the change list from where the change can be activated. Later on you can check which change list caused the deletion of a particular object. With Software Components the story is however a bit different. Once you try to remove them you will see a message like shown on Figure 1 below. 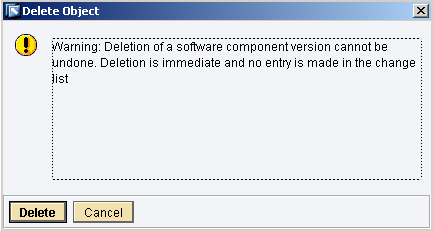 The message is saying that the deletion will not be visible in any change list in the future. So can anyone remove all Software Components without any trace ? It turnes out that it’s not that easy. Once the Software Component is removed you can always find info about this even in the System Logs and Traces. You can use the same filter as I did “workspace*deleted” to find only the relevant traces as per Figure 2 below.

I got this SWCV trace issue while talking to one of the developers so hopefully more people will now know where to search for removed Software Component.