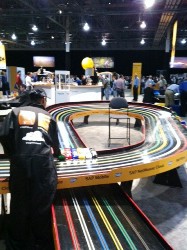 Situated right near the cavernous lunch area is the Run Better Speedway, a much bigger, faster version of a toy racetrack. I gave one of the cars a spin and peeled some major wheel. In fact, I got a little carried away and sent my car careening off the track right at turn two. The Run Better pit crew (Adam, Reed and “Baby” Zack) assured me it’s a problem turn where everyone wipes out. I asked why the track is making an appearance at TechEd and was told: “To bring fun to the people.” I’m down with that. And you should be too. The 10 best times out of the two minute races win free SAP hats. Start your engines! 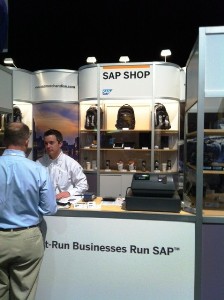 Seasoned SAP event-goers are no doubt familiar with the SAP Shop. It sells all sorts of swag containing the iconic SAP logo. I was surprised to see one of the shop merchants re-stocking some of the shirts. Do people really buy this stuff? I had to ask and was pretty much blown away by the response from Adam Hilldore of Chamberlain Marketing Group, the preferred swag vendor of SAP. “It’s always busy here,” said Adam. “And I am constantly surprised each year by the best-selling items.” This year, it’s the Powerbag  Backpacks which will set you back more than 100 large. “They have an actual internal power source to charge mobile devices,” said Adam. Mini-speakers, eco-friendly apparel and anything iPad related (four different styles of iPad cases!) are also flying off the shelves. 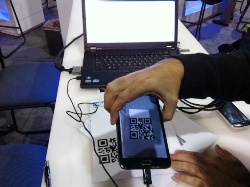 This is a really great area to get a sense of how some of SAP’s latest and greatest tech works. I was shown a demo that involved an everyday technician scanning a QR code to bring up more info on a particular widget that might need repair. The technician’s back office people could be looking at the widget data at the same time as the technician to determine the issue. “It’s a standard-based, open application that anyone (read: internal IT department) can develop on,” said Pankaj Kumar, Solution Manager for SAP SW Cloud.

SAP social media gurus Chrissy Bryant and Kevin Cassidy joined me in the Social Sharing Photo Booth (I’m in the Village People get-up) for this, ahem, classic photo that we just had to share on Twitter. Glossy hard copies are also provided. Swing by and get your freak on! 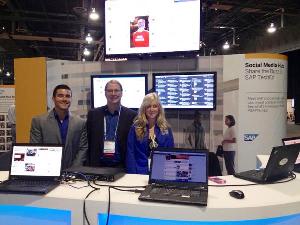 I am actually sitting at the Social Media hub right now, as I finish writing this blog. I’ve witnessed many attendees swing by to check out the video monitors displaying various Twitter streams and other social data associated with SAP TechEd. Many others are seeking the advice of SAP’s social media team to learn more about LinkedIn, Twitter and more. Speaking of more, SAP’s Kevin Cassidy tells me there are more people tweeting compared to last year which makes it feel more like SAPPHIRE NOW-sized social behavior. “There’s also a lot more photo sharing and people seem to be having a lot more fun compared to last year,” said Kevin. SAP’s Brian Ellefritz has noticed a nice up-tick in overall Tweet-age because attendees have more followers compared to a year ago. “The same amount of Twitter activity reaches more people,” said Brian.

What have been your most magical moments at TechEd this year?