The downtime minimization feature nZDM for SUM has been general available for some months.
After a very successful period of controlled projects on customer site all over the world this feature is now included in the Software Update Manager 1.0 (SUM). Until it was shipped with SP7 it has been used on customer side in more than 150 executions, 40 productively. It is a main improvement to reduce the business downtime significantly.

The nZDM feature in SUM is still considered for continuous improvement activities.

What do you have to invest?

There are no separate license fees for using the downtime minimization capabilities of SUM. SUM is part of the SL Toolset and the newest version can be downloaded from the SAP Service Market Place.
This document describes the new available feature and the benefits you can expect regarding downtime optimization of SUM. It will be regularly updated to keep you up to date.

Benefits of nZDM for SUM

In SUM you have the option to use one of the following pre-configurations:

For further details about the shadow instance in SUM, see SCN blog http://scn.sap.com/community/it-management/alm/software-logistics/blog/2014/04/02/sum-introduction-to-shadow-system

Considering all downtime minimization capabilities which are offered in the advanced pre-configuration mode of SUM you can select the following capabilities:

You can select which capabilities you need, the features are optional.

How to activate the offered downtime minimization capabilities?

nZDM for SUM can be used to apply Support Packages, applying enhancement packages (EHP) or to upgrade an ABAP-based SAP Business Suite or SAP NetWeaver system.

Which improvement can you expect when nZDM is used in SUM?

The downtime minimization benefit depends on the level of your update. An update of ECC 6.0 EHP1 to EHP7 is much more benefitial than an SPS implementation of SP9 to SPS10. Therefore the main focus of customer activities is on EHP implementations or upgrades.

Based on the already made experiences on customer site nZDM for SUM enables a minimum downtime of around 2:30h – 3:00h when implementing an EHP or running an upgrade.
The overall technical downtime (= minimum downtime + post-processing) is reduced significantly although the post-processing phase is extended due to the nZDM feature to around 0:45h – 1:00h
So in total we have an overall technical downtime of 3:15h – 4:00h

Just compare it with your key figures of your last EHP update.

Please find below 4 examples from real customer projects and a comparison between the overall technical downtime with SUM without nZDM or EHPi and SUM with nZDM: 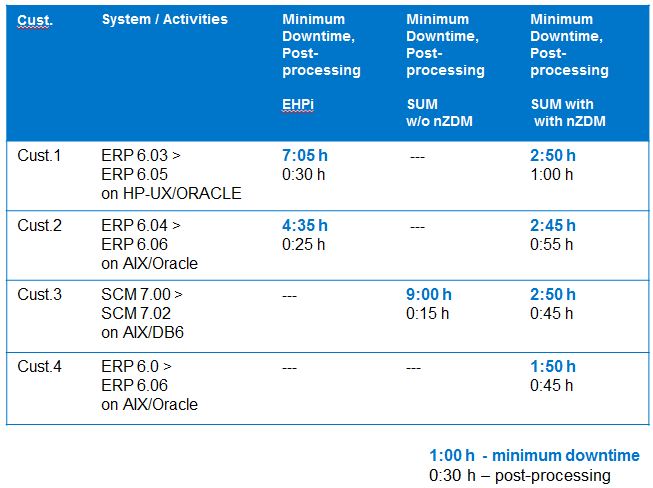 As you see all the data we got are roughly 2 years old. At this time we offered nZDM of SUM on request and so we got a very good overview about working in different system environments and sizes.

After available on request we get feedback only based on the SUM upgrade info that are sent to us
Based on our experiences the technical downtime reduction seems to be stable and independent from database or data size as nZDM for SUM was tested by big customers as well.

The following measure shows an internal comparison between SUM for SAP ERP 6.0 with and without nZDM for SUM.
Also in this example the technical downtime is reduced  > 55%!

The end-user realizes the wow-effect for sure when the downtime is reduced significantly!

Additionally you see that the overall project time is increased to approximately 20-30%. This additional time is used during the phases which are running in uptime. This has to be considered in the cutover plan.

How does nZDM for SUM work?

The nZDM capability of SUM uses the shadow instance for the main import.

Quick facts about nZDM for SUM:

Record & Replay means that the database changes during uptime of the maintenance process create triggers, which records the changes. The recordings are only needed for tables which are used for the update / upgrade in the shadow. With the help of the recording the shadow tables will be updated after the upgrade/update phases in the uptime. The majority of the recording updates are run in the uptime. Only the delta (last 10%) has to run just before the switch in the downtime.

What are the consequences for CPU and memory consumption?

You maintain the amount of process which are used by the Record & Replay technique (CRR). The default value for the amount of processes is three. This is the value which is recommended from our side based on the experiences we made with our customers. I am not aware of an impact on pereformance for the enduser.

nZDM can be used for common used databases with the following minimal versions:

nZDM is described in the official user guide of SUM as well.

When you are looking for additional support please also check the frequent asked question document:

In the past you probably got issues with nZDM that for example the replication rate showed 95% but the SUM didn’t accept this.Or you got issues due to very big tables to be copied.

With the latest SUM SPs we optimized nZDM:

When you need to copy big tables (SAPor custom tables) to the shadow instance you should be aware of a parameter explained in the SAP note 1678564.

The default exclusion value is 50 GB.

If you want to mainly run conversions you probably didn’t need this feature. You disable the the maximum table size feature using the SAPuppar parameter set_max_tab_size = OFF.

In older SUM versions it sometimes happened that the refresh of the CRR_CONTROL was very time consuming due to high load of CR entries. The threshold was not accurate. This has been changed with the new SUM 1.0 SP. For this a “Cut-Off” Limit (“Maximum Logtable Row Count”) is introduced. This threshold  ensures that the calculation is not such time consuming.

With the next SUM SP17 we plan to improve the start / stop procedure to avoid conflicts.