Playing in the clouds: Paul Predicts 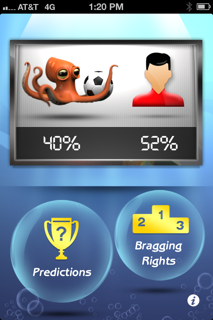 “All work and no play makes jack a dull boy” or so the saying goes. So we decided to play around and build Paul Predicts.

For those that watched the World Cup in 2010 you may have heard of the phenomenom that was Paul. Paul was a real life Octopus living at Sea Life in Oberhausen. He successfully predicted the result of the German Football teams seven games in the World Cup as well as the winner of the final.

Paul Predicts is an iPhone game that allows you to compete with your friends and Paul when predicting the results of this season Champions League games. The current version can be downloaded from iTunes. Pauls predictions come from you the crowd and a super secret algorithm (codename average) is used to determine Pauls Predictions.

The current version is a simple gaming mechanism, the next version (coming soon) will expose the mountains of OPTA data being collected that will give the players statistical advantages, because we all know that football matches always go as expected (ask the Danes about their 1990 Euro Championship) .

Just look at the standings in the image, 52% of my predictions are correct, better than 1 in 2, the Paul, the crowd is not doing so well, predicting games is not easy. As football fans we all think we know the best teams, time to test your knowledge and play Paul Predicts.

What is behind the goal

The game is for everyone, this is not b2b it is cloud2c, we wanted to make it open for all to play. What better platform for us to use than SAP Netweaver Cloud.

Fortunately for us the same time the plans were coming together to create Paul we also saw the availability of SAP Netweaver Cloud. It gave us the perfect option of a HANA database with a Java Platform as a Service that we could use for collecting OPTA data, predictions from users and exposing it all for the mobile application.

Why HANA, if you have ever seen the data from OPTA you would understand. OPTA provides data from many sporting events. For the football data it includes the expected data like wins losses scores, and then mountains of data on players tackles, shots, corners, unsuccesful short passes, long passes, duels (did not know they fought in footy) and on and on. It is an insane amount of data.

The data was modelled in eclipse and the data exposed using Apache CXF.

The server implementation and app were developed by volunteers giving what time they could (or their really kind managers allowed) to put Paul together. I have to admit I have had a lot of fun and met some really great people. I have been blown away by the talent of the developers and can’t thank them enough.

If you download version 2.1 you will see a simple game for predicting and challenging your friends. You can tweet your predictions and invite friends to join. In version 2.2 you will be able to drill down into the OPTA data to help you make your prediction. As the season progresses to the final next year we will add more features to try to enhance the game.

The awesome developer of the cloud implementation Robert Wetzold will provide follow on blogs describing the implementation we (well he and Siyu) created on the SAP Netweaver Cloud in more details. They were given an incredibly short timeline to deliver the java implementation and delivered on time and with some really awesome features for the app.

I will create a follow on for our experiences creating the iPhone application.

We have Paul predicting with his secret crowd sourced algorithm, we’d love to get together another user based on Predictive Analytics.

Why only apple devices

The plan is to cover more, but as yet we have not had time. We delivered the first platform we had ready, we are not ignoring the others.

It’s been nearly seven months since Paul was released. The Champions League is almost over, just the final remaining. But Paul is giving more than that. The HANA Cloud software behind Paul is now available as Open Source so you can try this yourself. What better way to learn than see the insides of a working example. Get Ready for your Paul Position from Peter Ivanov will show you how to import and use the demo application.

John, Robert this is incredibly cool. @Robert, knowing some of your other innovative projects i ask myself whether you find some time to sleep?

Who needs sleep when we can bring Paul to life again! It has been a great experience with this awesome team and the Netweaver Cloud helped us tremendously to cut down development efforts and make it happen in time. I will discuss some interesting aspects of the project in blog posts to come.

I clearly remember the first time you told me about this project and me convincing you to give SAP NetWeaver Cloud a chance. Seeing the results now and reading about your experience and conclusion on the platform as the 'perfect choice' is a dream come true 🙂

Well done and congrats for the way you and the team pulled this off!

Hungry for more... can't wait to see what you'll have in store for us at TechEd DemoJam 😉