SAP has been very active recently in the promotion of its mobile platform. There is also a mobile store from SAP that currently includes over 130 apps from SAP and partners. Some of these mobile applications are free and some of these applications have licensing fees associated with them.  An important revenue source – in-app purchases – for mobile developers and SAP, however, appears to be currently unsupported in the SAP store.

This blog examines in-app-purchases in mobile apps and the difficulty that SAP will have in exploiting this revenue stream.

Note: I’m a relative novice in the mobile enterprise space. I recently bought my first iPad and, as a result, have been reflecting on the impact of this new technology on SAP.

Before we focus on SAP and its mobile efforts, let’s first get some background information.

In-app purchases are purchases made from within a mobile application. Users typically make an in-app purchase in order to access special content or features in an app such as power-ups, restricted levels, virtual money, special characters, boosts, etc. The purchasing process is completed directly from within the app and is seamless to the user in most cases, with the mobile platform provider facilitating the purchase and taking a share of the money spent (usually in the range of 30% or so), with the rest going to the app developer. [SOURCE]

In-app purchases as a revenue source for developers

Gartner emphasizes the importance of this business model as a means for developers to gain additional revenue.

Using an in-app purchase business model is a more effective method of converting casual app users into paying customers and then retaining them with good user experience and continued product updates. This is a different approach from upfront payment where users pay and download, and can be disappointed by the experience and never come back. In-app purchasing opens the door to a recurring revenue stream for developers, but app performance and design will always be the most important factor when attracting new users and keeping them satisfied. [SOURCE]

Developers of gaming apps have recognized this potential and most free games contain in-app purchases.

In-app purchases as a revenue source for stores

The revenue of such in-app purchases are usually shared between developer and store which means that most stores support this functionality.

“App stores should support in-app purchases as soon as possible as this offers a new path of monetization, and helps to attract developers as they attempt to extend an app’s momentum by providing easy access to upgraded services and functionality.

In-app purchases in other mobile stores

Let’s take a quick look at how others stores support this functionality.

We have to remember that the most mobile stores are controlled by the mobile operating system vendors who provide not only the ability to use their respective stores to handle the purchases but also have an API that allows developers to use this functionality (for example, iOS and Android). Remember these APIs are directly connected with the respective store of that vendor.

The Apple Store prominently displays the possible in-app purchases that are possible with each app. 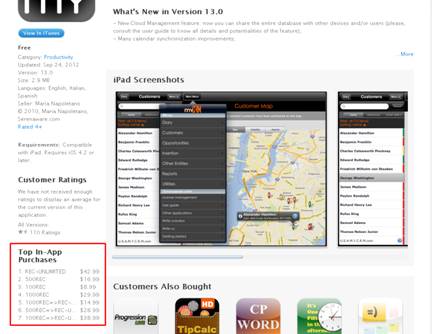 Amazon is also looking at this functionality for its Kindle Fires.

Maria Ly, cofounder of physical fitness apps developer Skimble — which reportedly has been involved with Amazon’s pilot program — noted in the article Amazon is considering a 30 percent commission to clients for its in-app purchase service — the same rate Amazon charges for developers for app sales.  [SOURCE]

Microsoft is also planning to support this functionality in Windows Phone 8 mobile apps.

“App Hub will provide tools for managing in-app commerce. You can specify what you want to sell, choose prices and countries to make it available, and use App Hub reporting tools to generate detailed sales reports,” he said. [SOURCE]

In-app purchases in the SAP Store

We have just discussed the use of in-app purchases in other mobile stores. Let’s explore the same in SAP’s Mobile store.

First of all, the current SAP Store UI has absolutely no indication of the presence of in-app purchases in the available apps. 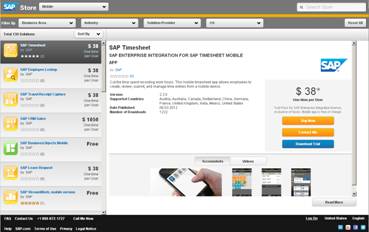 Yet if you look at the Criteria of Mobile Packaged Apps from the SAP Mobile Apps Partner Program, there is reference to in-app purchases in the section concerning “Commercial requirements”

The use of this potential within the SAP Store is made difficult by the fact that most applications posted there are also posted in other stores. For example, apps for iPhones / iPads are also available on the Apple Store while Android apps are located in the Google Play store.

Note: This multiple placement doesn’t always benefit the customer. For example, a comparison of one app that is provided on two mobile stores reveals a different price. 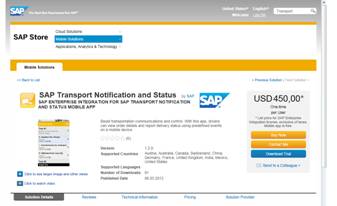 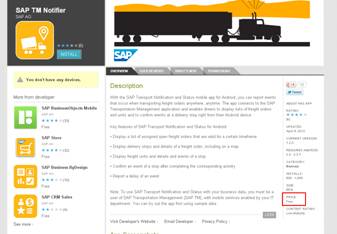 If such an application uses in-app purchases where would the user be sent to make his/her purchase?  I assume to the platform store (Apple Store or Google Play) rather than the SAP Store.  I have yet to see a mobile app that supports multiple stores.

Sybase Push 365 – which is actually powered by Urban Airship – does support in-app purchases but I assume that this associated with existing mobile stores rather than the SAP Store.  One problem is that currently there is no API from SAP that would support this functionality.  One possible location for such an API might be in the Sybase Unwired Platform but I failed to find any details.

In-app purchases produce an important revenue stream for all involved.  SAP obviously would like to tap into this revenue. Developers might be persuaded to use in-app purchases connected with the SAP Mobile Store when A) the amount of volume associated with this Store warrants such a change, B) they receive some financial incentive (for example, SAP just takes 10% of in-app purchases rather than 30%) to make change and C) there is an API that supports such interaction.