At the June HR 2012 conference in Milan conversations with Nakisa’s VP of Alliances set the seeds of an idea to run a Partner Forum.  This resulted in me, and my former colleague Luke Marson, being invited to Nakisa’s head office in Montreal at the end of September 2012 to give the concept a trial run.  I take my hat off to Nakisa for making this happen.  You can read Luke’s diary of the week here.

The week was packed with meetings with almost every department within their business.  Below is a brief overview (you really wouldn’t want to see all of the notes I took) of the meetings, the key messages and my impressions of Nakisa at this time.

I last visited Montreal in Feb 2007 and recall Nakisa’s previous office.  Montreal is a city (metropolitan population of 1.6m) in Quebec, so French is the dominant language, although English is spoken extensively.  The new office is larger and in a converted multiplex cinema which makes it interesting and quirky.  Hidden away are many meeting rooms, open areas, a pool table, table football (a.k.a. foosball/Fußball/Kicker), a table tennis table and even a cinema room on the 2nd floor between other more “standard” meeting rooms. 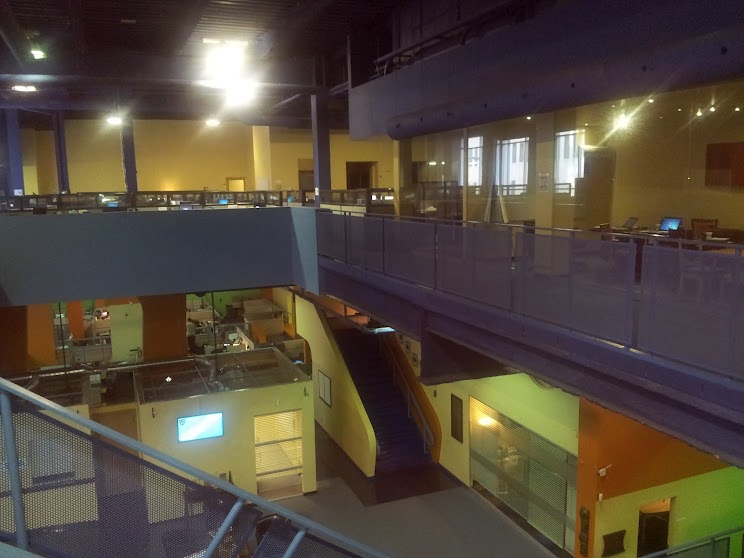 Overall the office has a good feeling about it.  People are working hard and collaborating with what seemed like a constant stream of people huddled together in different groups and white-boarding ideas.  Recently the teams were re-organised to group people working on the same product together (functional through to technical) which seem logical and will promote communicate between the different skills within a product team.

Luke and I added to the office in our own small way by bringing some Belgian chocolates and English tea as a welcome gift, although the English lady in marketing wished I’d brought salad cream!

Unsurprisingly there was a lot of focus on the 4.0 launch (at HRTech on Mon 8th Oct 2012).  You can get a glimpse here or read Nakisa’s press release. Apart from the external marketing there was also lots of information posted around the office – large screens, exhibition stands and even an interactive quiz for employees.  Nakisa are clearly making an effort to keep their staff informed on the project’s progress and engaged in their go to market strategy.

The Org Visualization team gave a walkthrough of each of the 4 applications and the changes in each:

Only minor changes in the application but the big news is the introduction of OrgHub for Mobile (iPad only initially).  The great news is that it runs HTML5 (so hopefully other devices will be supported soon).  Also important is that it does not require any further application configuration or hardware.  It is enabled via the OrgChart AdminConsole, has its own styling but otherwise re-uses the configuration (meaning any configurations you’ve done will be visible on the iPad).

OrgModeler has been completely re-designed. It is now a great tool for supporting the end to end process of modelling.  It is a cleverly designed solution built on ALE/IDocs to “Smart-Sync™” data with the long awaited addition of a controlled and auditable real-time write-back process. Expect Nakisa to shout a lot about this product in the near future.

This product has evolved since it was launched with 3.0.  In 4.0 it will be renamed OrgAudit, further scoring mechanisms have been added, dashboards improved and rules can now be secured by role.  Update: Read more about 4.0 OrgAudit in this blog: OrgAudit – An Introduction.

In 4.0, support for OrgManager will be from EhP0 (it previously required EhP5).

In 4.0, the Talent Visualization suite of applications is being re-focussed by role and includes completely new Development Planning functionality.  Development Planning shows Nakisa’s intent to innovate in the area of Talent Management.  No doubt this is, in part, spurred on by the SuccessFactors acquisition by SAP last year.

Notably SAP TVN will only be supported from EhP4 onwards.  I think this is a sensible decision since the SAP data model around Talent Management & Talent Development changed significantly in EhP4.

With the 4.0 release, Nakisa have continued their investment to extend the capability of the AdminConsole (the web browser based tool used to configure Nakisa’s applications).

There are lots of new features in the AdminConsole but the most powerful statement I heard all week was that Nakisa product team themselves used the AdminConsole to re-build their own SuccessionPlanning application.  Where something was not possible or not easy to achieve, they re-worked the AdminConsole functionality so it was.

The feedback on training offered to partners was that it is not deep enough nor broad enough (as it concentrated mainly on OrgChart).

After much discussion and white boarding (with post it notes – see photo), the training will be overhauled for 4.0 and will hopefully include some pre-course eLearning and a more concentrated “core skills” course with greater emphasis on hands on configuration.  Additionally, partners will be able to top up their knowledge in specific areas through follow up virtual classroom courses. 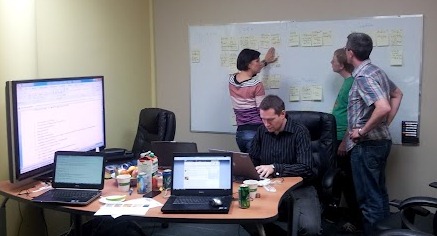 With a revised training programme, certification will be re-visited. Expect it to be based on attending the training, passing the course test and validation of skills by completing a project.  We also discussed the importance of having a way to validate a person’s certification (i.e. Nakisa need to publish a list).

Update: You can hear more about the proposed 4.0 training in this video or read my Diary of 4.0 Delta Training.

Office of the Architect

This is a small group who are the design authority for Nakisa’s products.  They act as a link between customers/partners and products, listening to both the good and bad feedback. Their role includes best practices, design, escalation management and prioritising product developments.

Personally I found this to be one of the most enjoyable sessions as it was a chance to discuss some common problems and explore possible solutions.  My discussion with them covered all areas of products, installing, support, common issues, etc.  I made several suggestions that they took away but also it was noticeable how many of my comments they had already recognised and they were keen to suggest possible ideas & solutions that they are considering to address the points in my feedback.

I also showed them some of the tools and documentation we use within my own company.  It really helped validate the processes we go through in a project delivery. A couple of the deployment tools we’ve developed (at our company) were of particular interest.

Nakisa act as third level support (with SAP doing first and second level).  They showed us graphs and statistics on number of calls raised & closed. Interestingly they marked each product (and SP) release on the graphs, so it was easy to see how SP updates had resulted in less issues hitting Nakisa’s support desk.  This was very noticeable, particularly the downturn in issues from 3.0 SP2 onwards.

Only about 20% of issues hitting the Nakisa support desk result in change to the product to resolve the ticket.  This means that a large chunk of issues even reaching third level support are implementation (or the dreaded “feature as designed”!).  Does this highlight the value of using a skilled and proven consultant?

Nakisa also receive the results of feedback left by customers via the OSS surveys which shows that their satisfaction rating has risen over the last year to 92.9%.

Meeting the support staff individually was helpful in building a better working relationship (in preference to spending time over OSS/email/phone).

This team delivers projects using Nakisa’s own resources. As a trained partner, with years of experience implementing Nakisa’s solutions, I haven’t had too much interaction with this team historically.

Due to the Director of Professional Services being off sick, we had a short meeting but re-convened the following week via a phone conference to discuss approaches to implementation, documentation and what types of services that they could offer to partners of varying levels of expertise. Nakisa are keen to ensure their customers have successful implementations; whether they use Nakisa’s Professional Services or a Partner company.

At the end of the week we sat initially with all the teams we’d met to feedback on our impressions of the week.  Finally we had about an hour’s discussion with Nakisa’s CEO and the VP of Alliances.

In addition to the points I’ve already made, I fed back that it was clear to me that each of the groups we met had come to their session well prepared, willing to share, open to listening and actively interested in what we had to say.

The other strong feeling I had was that everyone was very welcoming. Whether it was coming to shake hands and say “hi” because they’d read a blog or tweet I’d posted or offering to take me to lunch, dinner or out for a drink after work to see Montreal.  One night I even managed to see a Cirque Eloize show called iD, which was stunning.  Both management and employees worked hard to make us feel welcome and it was very much appreciated.

Both Luke and I recorded separate interviews with Nakisa – maybe you saw the picture I tweeted? Like Luke, I hope some of it remains on the “cutting room floor” (or whatever the digital equivalent is).

I also spent some time with key Nakisa staff planning a future webinar (28th Nov 2012) and liaising on current and upcoming projects where we are working together.  No minute was left unused!

The SuccessFactors acquisition has changed the SAP Talent Management landscape but Nakisa are focussing on what they can do to develop their own product suite’s capability and continue to deliver a strong solution to the market.  They remain part of the SAP HCM on-premise solution for Talent Management and HR Core.

I believe customers will (sensibly) still continue to consider what type of solution is the best fit for them.  Currently in the market there is a lot of discussion around cloud vs on-premise.  I believe this conversation needs to be more about the functionality offered by each type of solution.  Each customer will place a different importance on each component of the solution, usability and integration to their existing systems.

If a customer decides to run SAP HCM (on premise) then Nakisa’s solutions already extend the solution in the Org and Talent Management areas and the signs are that Nakisa will continue to drive innovation in these areas.  Nakisa solutions could be delivered via on-premise, private cloud or a hosted environment.

With over 500 SAP customers worldwide, they have both a strong base and a large market still to go at.

Overall I had an extremely busy but fulfilling week.  It was great to renew acquaintances as well as meet lots of people that I’d dealt with remotely but never met face-to-face.  I have some fond memories of the people and city, as well as a greater knowledge of the products and future d

I left Nakisa with a positive attitude of its people and future prospects.  Much like Montreal itself, they have a diverse and rich culture.

The Partner Forum further strengthened the partnership between our companies but also at an individual level.  The format worked for me and, based on Nakisa’s “thank you” emails this week, it seems to have worked for them too. Hopefully the scope will be extended next year to include other partners.

Long may it continue!

For clarity: I have never been employed by Nakisa.  I work for a consultancy company that is a global services partner of Nakisa and I have been involved in deploying Nakisa’s products for nearly 6 years. Nakisa paid for my flight and hotel to attend the forum, but all the views expressed above are my own. 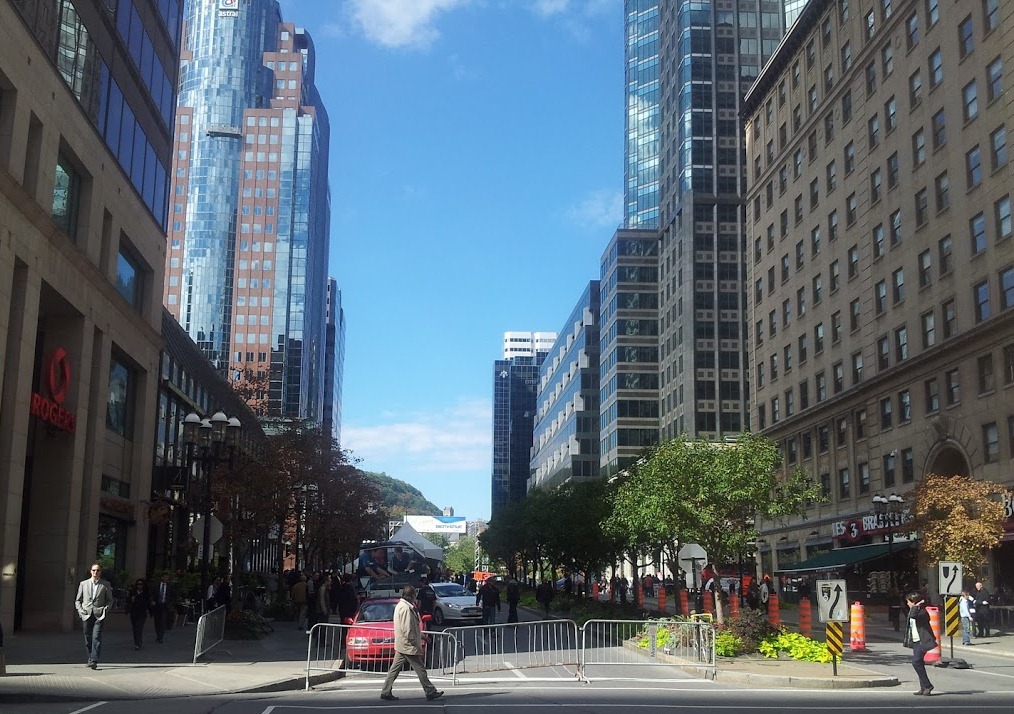