SCN: The Year of Living Beta-ly

In the 10 months since I wrote about issues with the upgrade of the SAP Community Network platform to Jive version 5, we’ve seen a false start, a soft launch, a myriad of complaints and headaches, and a flood of content being posted. What’s my take on the quality and stability of the platform now? I’ll share my report card on areas where community members are most affected.

In the last weeks of the “old” SCN, there were random unplanned outages where the site went down.  Generally the restoration time had been under an hour, but the surprise factor and potential loss of work and context meant users who were creating content were inconvenienced.  Coupled with a blogging platform that had no “save and continue” function, many authors would create content off site and paste into the old site.

Does this continue today with “new” SCN? Yes, in some cases. Unplanned outages have been greatly reduced.  Planned outages are still longer and more often that I would expect (given a company with some experience in providing enterprise platforms to customers who demand high uptimes), and sometimes the announcements are rather short notice (“system going down in an hour”). That might be my perception however, as my time logged in varies with workload and personal commitments.

Here’s why this topic doesn’t get an “A” or “A+”.  While working on this blog, I selected “save and continue.”  The message says “Your changes were saved successfully” but (and this is the Big But that drives users crazy), the message also says “A recovered version of this content exists… Use recovered / Delete Recovered”.  No obvious clue to what it thinks I lost. I always pick “Use recovered” and hope that means what it says.

Many “cheerleaders” lauded the new look and feel of this platform as it was tested and rolled out.  I reserved judgment, knowing that there are many more aspects to a successful user experience than simply nice colors and shiny buttons.  I was also comfortable with the old platform, knowing my way around the links and hooks to get content published quickly. I also had reservations about moving two-thirds of the old platform(s) to the new one, leaving behind wiki pages for a “later date.”  That decision has caused some weird side effects, such as people copying previously public wiki pages into restricted spaces in the new SCN, editing them, yet leaving the old pages behind. Messy.

As there are numerous aspects to user interface, I’ll talk about a couple that affect my use of SCN.  With a plethora of new routes to content, I’m still finding, after nearly a year of use, difficulty navigating to specific locations.  If I get an email with a link, I can get right there.  But if I visited a space a week ago, and it’s rolled off my history list of 5 links per area.

My history list on the systems I use at work is set to 5000 lines.  Maybe this is not feasible with SCN and Jive 5, but it doesn’t take long to click on 5 places and lose track of anything prior.  Yes, there are bookmarks, but in general, there’s such a maze here that dropping a bread crumb every place you might want to go back to is unwieldy.

I’ve already written about the underlying tools not working for blog editing and other critical use on an iPad.  The improvements in link management, image uploading, and table creation and tweaking are appreciated compared to the old system.  However, I can’t think of features that weren’t in the old system; it’s easier to use, of course, but the old one wasn’t that difficult.

This topic gets a solid “B for Bizarre”.  Or, B for Bewildering.  For an occasional user who just views content, none of this matters.  For someone who creates content, comments on material, or, like me, moderates and “marks for action” suspect material, there’s a twisty maze of pages and patterns to follow. 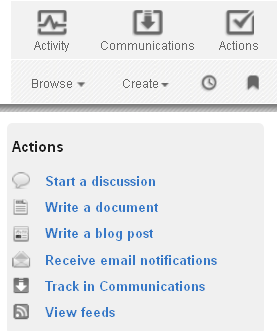 On this image (just a small part of one page), the term “Actions” appears twice, in different context, as does “Communications.”  For specific content, there is an option to receive (or stop receiving) email communications, but there’s also a “Track in Communications” options that controls notifications too.  I’ve learned that some activities can’t be set up as email notifications (really important ones, too), and that requires me to log on and drill into more consoles than should be necessary.

Overall, the notifications work well, and clearing read material (yeah, got the email, don’t need to read it twice) is simple enough.

I was going to look at “bug tracking and reporting”, which would have gotten this topic a higher grade, as bugs are being addressed, but then I realized that users shouldn’t be concerned with bug tracking on a social media site.  The topics should be about bugs with enterprise software, not about bugs with the methods of solving those bugs.

Below are links to issues lists, software release (changes) dates, and a matrix of lost content.  I’ll stipulate that a site migration will cause all kinds of dead links and content mangling due to previous tricks, hacks, and macros not being supported on the new platform.

However, I find it sad that months went by after a “soft go-live” and users were being kicked out of the system frequently (i.e. many times per day).  I still get kicked out regularly, and though the reconnect is simpler than it was, I don’t get kicked out of gmail with anywhere near that frequency.  How can browser user context not be flawlessly executed by a world class software firm?

I’ll let the reader review the list of bugs and make their own rating as to the severity of bugs left in the system.  The fact that the welcome page image still says “Beta” nearly a year after all of the content was moved and the old system mothballed says it all for me.

This one doesn’t get a total “F for Fail” as it’s not really the SCN administrators fault that users can’t figure out the difference between a forum post and a blog post.  Clear to me, but then, I’ve been doing this internet stuff for a few years.

The sad part is this releases the links into the wild.  Then (if reported), someone has to look at the content, report it, someone else moderates it, and then the link comes back as “The item does not exist. It may have been deleted.”

Mainly this topic gets a harsh grade due to the lack of mobile “apps”, which I’d expect from an enterprise software company.  There have been apps for niche purposes, such as contact lists, and event details, but nothing like a killer app that allows slick use of the back end content with any kind of the shiny GUI I’ve seen on many product demos. 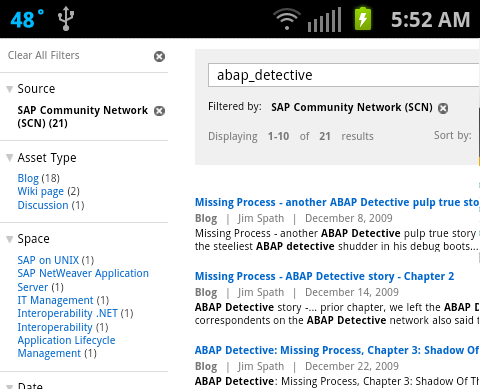 There isn’t a “D” or “F” here, because the site is usable even on the small form factor of a phone browser, if you know what you’re looking for.  On the other hand, some screens and navigation steps just don’t work.  I shudder to think of trying to enter any blog content via a handheld device, even if the tool set was supported on the device (Flash, Java, on and on).

Compared to the “old” SCN, where people often said “search via google instead”, this is greatly improved.  The drill down ability is quicker than the old filters, searches include blogs and forums (but not quite wiki pages on the old site), and, as long as you know what the spaces mean, a fairly intelligent narrowing down of content.

I’ll point to the above image as an example of the improved filtering.  You see, in descending quantity, where the search hits are.  Even if one of the links doesn’t have what you want, that’s an important clue which space that material might be discussed in.  You could then broaden the search string, but limit the space, or just browse that space and post there if you can’t find the answer.

Search is fast, generally.  What’s slow sometimes are context sensitive searches that are done through the Jive catalogs (like looking for history or other pop-ups). In this case, SAP’s TREX technology seems to be working as designed. As I was on several conversations months ago about the search filtering algorithms, I’m familiar with the team that designed and implemented this component.

What grades would you give?  What subjects did I miss?