Why SAP’s #OOW Smack Down is Justified 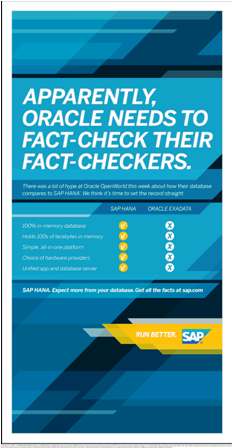 Last week, Oracle chief Larry Ellison told thousands of Oracle Open World attendees: “the SAP HANA in-memory machine is like, really small” and “you know, that’s a little bit smaller than what we offer.” As a result of these careless comments, records were set straight, brains were fried and, yes, SAP released the hounds.

I think SAP’s swift and severe reaction to Ellison’s remarks is justified. Simply put, if Ellison hadn’t said what he said, SAP wouldn’t have unleashed a wave of blogs, case studies and videos on the #OOW Twitter stream designed to remind those who care that SAP’s in-memory computing offering is by no means “really small”.

For the record, SAP developed a 100TB HANA system with IBM which is available today. Want real business benefits? Try this on for size. Or this. Or even this. SAP also ran a full page ad in The Wall Street Journal (pictured) that says: “Apparently, Oracle Needs to Fact-Check Their Fact-Checkers.”

Some think this latest spat between SAP and Oracle is a waste of time, makes SAP look bad and/or doesn’t offer any real value to customers. Some went so far as to suggest that boundaries were crossed because the #OOW Twitter stream was (gasp!) “hijacked.”

Let’s be clear: False statements aimed directly at SAP were made by a very public figure during a very public event. Is now really the best time to be discussing the finer points of Twitter etiquette?

The popular image SAP has projected as being a nice company where nice people come to work is true. Employees respect each other, the environment and its customers. These are major reasons why SAP was ranked the 24th most valuable brand in the world in 2011, ahead of Nike and Amazon. And now with the “warm, good vibes” SAP HANA is projecting, I guess it’s not hard to see why Oracle likes talking about us.

But please, Larry, next time get your facts straight. Because, as the late, great Bill Bixby once said: “Don’t make me angry. You wouldn’t like me when I’m angry.”

Are Brands Entering an Era of ‘Truth in Advertising’?

" Is now really the best time to be discussing the finer points of Twitter etiquette?"

Yes. Absolutely it is. I was ashamed of SAP for hijacking the Oracle Open World hashtag. SAP is fine to correct Oracle's facts by blogs, etc. Heck, SAP could have even come up with its own hashtag for rebuttals, I have a number of creative ideas on how that could have been done very effectively  But officially, event hashtags are dependent upon a public trust. The deteroriation and manipulation of event hashtags hurts everyone. I was sad to see SAP make this move, I think it made the company look bad and I hope its hashtag hijacking days are over. I cringe to think about how Oracle will retaliate, this is vendor politics at its worst.

There are high road ways of getting similar points across. One thing I remain baffled by is that SAP is especially hyperactive when it comes to defending HANA from Oracle over other misstatements made by other vendors. I think a response of quiet confidence would be much effective, which was the tone of Vishal Sikka's blog post that I was happy to feature on my newsfeed. I am going to be asking customers what they think of all this, in the past they have found this kind of skirmish irrelevant and distracting. I'm looking forward to learning more.

even though i'm still struggling with the term "hijacking" (does it mean anything negative using any preexisting hashtag?), but i don't think anybody owns the hashtags and i wouldn't like to see any copyrights or anything resembling intellectual property protection or libel around them. i think SAP got the message and will be extra careful not to get their emotions get in the way of balanced and nuanced views.

Greg of course no one owns the hashtags, that's why there is a delicate trust to respect them. SAP would want its event hashtags respected as well. But you have to admit: SAP's conduct is the kind of thing that would eventually cause less openness with hashtags which would be a real shame. I don't think SAP got the message, however - otherwise why would Tim, who is an important voice in SAP's communications strategy, authored this unapologetic blog post? I completely reject the false dichotomy that the only options are to "lie back and take it" or engage in black hat practices. There is a middle ground, a better way. SAP sometimes shows that way but not this time. Shame of it is I have some creative ideas on how this could be done and others do as well. But we weren't asked.

Jon, thank you for chiming in, would love to hear some ideas. Maybe at TechEd if you have a free minute?

@Tim - so let me see,,,,you guys get to think up great ways to market and you want Jon (and presumably anyone else) to give you freebies? Good luck with that one. 😉

Dennis, the only freebies I am interested in are these:

As I tweeted during the OOW Smackdown, I thought this video from James Governor was much more authentic than the flood of tweets from SAP.

OK - the video doesn't have all the technical details included in the various executive blogs and interviews but it is less aggressive and more subtle.

@Tim - so now we have a defence of a defence? My but SAP has got a thin skin and plays perfectly to a game it doesn't understand. LJE must be guffawing when he reads this kind of thing.

Suggest issuing all SAP marketing with copies of Art of War.

Better still - don't get angry, get even.

Dennis, agree, there is an element of all this that unfortunately benefits the other guy in the realm of any publicity is good publicity.

But I don't think SAP has thin skin. I think we've proved for literally decades that we most certainly know how to take the high road, let things roll of our backs, etc.

Sometimes, not such a bad thing for SAP to set the record straight in a more assertive fashion when the truth is stretched "by orders of magnitude."

"...when the truth is stretched "by orders of magnitude."

I've been a strong supporter of SAP-HANA technology. After reading this, I wonder if the truth was really stretched "by orders of magnitude" last week. The title says 100TB performance test results. 100TB was before compression; compressed data size was only 3.78TB; SAP-HANA used had 8TB of total RAM.  I hoped SAP would come up with stronger stories. Oracle 10g provides excellent compression rate.

SAP's message is confusing. If what SAP demonstrated(100TB db) in Sapphire '12 was real, then what message they're trying to send with the latest blog. Scalability with 100TB has already been established, isn't it? At this point, SAP should be talking about 1Petabyte and not 3.6TB to promote scalability feature.

In my opinion, what led to LJE's remarks was triggered by the confusion in SAP's message. I'm disappointed.

If SAP DOESN'T have thin skin how come my Tweetstream was polluted by so much righteous indignation? This is an internal SAP disease that's been festering beneath the surface for YEARS. Get over yourselves. It does the company ZERO credit. 😛

PS - for some reason this has ended up in the wrong place - meant for Tim...

@Bala - EXACTLY. When SAP sorts that out, then it can tell its own story.

i see this rant not showing any signs of fatigue. there's a huge installed base for both SAP and other vendors (Microsoft, Oracle, and IBM come to mind and not necessarily in that order). all those vendors work and compete with each other (remember coompetition?) and they all want the share of the corporate IT pie.

the battle has seemed to have moved to the grid with conferences and webinars generating tweets from both sides and then some. the social media has enabled more voices and opinions and we all, big and small, are still learning how to use it to our advantage.

SAP is not different from its direct competition and has waged a lot on the success of HANA. i don't see a reason for them not to be sensitive about it.

i also don't see it as a disease but a natural step in the company's growth path.

a voice from the "peanut gallery"