In this chapter of the Food Safety blog, we will look at how compliance should be looked at as an investment, rather than a cost. Many of the requirements of FSMA will result in savings to manufacturers, and we believe that overall, FSMA compliance will result in a positive return on investment.

There are many reasons to comply with FSMA, not the least of which is that the FDA now has some pretty big teeth. The FDA can now block food at the border, quarantine suspect food in a warehouse or in transit, destroy tainted materials, close manufacturing lines or plants, and enforce substantial civil and criminal penalties against violators of the law. But there are also good economic reasons beyond the obvious doomsday scenarios.

We all remember some of the recent disastrous food safety events and the damage they caused to the manufacturers involved. In two notorious cases in 2011 alone, there were 39 deaths in 18 U.S. states traced to Listeria in cantaloupes [1] and 53 deaths, mostly in Germany, attributed to E. coli in bean sprouts [2]. In the case of the E.coli outbreak, German health authorities initially attributed the outbreak to cucumbers from Spain, causing hundreds of millions of dollars in losses to Spanish produce exporters. Based on further testing, that attribution was later withdrawn, but the damage was done. Even cucumbers of non-Spanish origin were affected by a precipitous drop in price and loss in revenues. The speed of communication in today’s world results in dramatic swings in consumer perception, often based on incomplete or incorrect information.

Among the risks of non-compliance is the steep decline in shareholder value that a company can experience when a serious food-borne incident occurs. But in fact, the major costs of a recall are almost always due to the loss of shelf space at the retailer and the difficulty and expense in getting that space back. Since no retailer wants blank space on any shelf, most will fill the space with a competitor’s product, and you may lose the space forever as your competitor profits. According to Deloitte research, 42% of retailers will replace recalled products with a competitor’s brand.

Another direct cost is that of insurance. Some insurance companies are repricing risk insurance for food and beverage companies, offering more costly “FSMA enhancement” policies to new and existing customers. And even when no direct damage is proven, an entire category of product can be affected when a perceived problem is publicized. When Dr. Mehmet Oz stated on TV that apple juice made from Chinese concentrate contained unsafe levels of arsenic, sales of all apple juice tanked for some time. In the Listeria incident mentioned above, sales of cantaloupes plunged 80% upon the news of contamination at a single farm, even though that farm was quickly identified and its products recalled.

But beyond the damage unsafe products can cause, there are also benefits to be found in doing what FSMA requires, without regard to legal penalties or brand damage. We believe that improved quality control will lower the cost of operations for most manufacturers, and adding end-to-end lot tracking will have the side effect of improving quality, by its very nature. In fact, in each of the areas mentioned below, there are substantial returns to be gained by at least some manufacturers.

In the development of new products, companies currently without PLM systems should realize 1%–3% reductions in total formulation costs. Good planning systems, which rely on underlying usable product, can return days-of-stock reductions of 15%–33%. Labor productivity improvements from lot tracking and warehouse efficiencies can reach 15%. Rework can be reduced by 40%. (Source: Deloitte, 2011.) Product returns can be drastically reduced. And there are many other sources of saving. 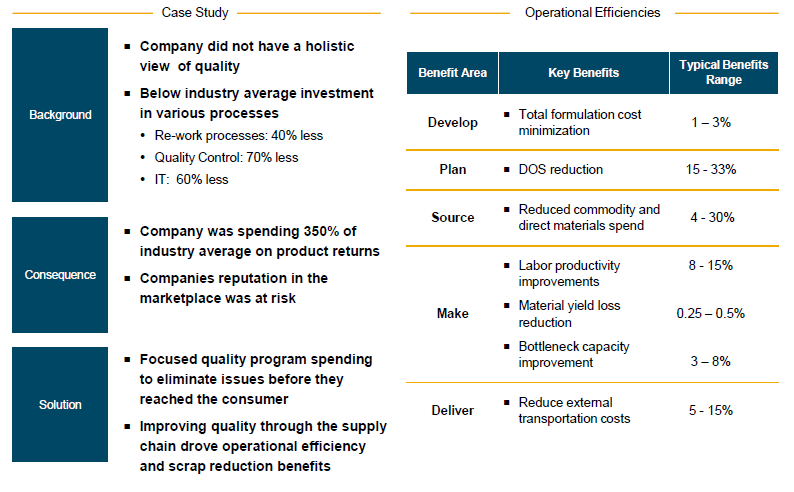 In one anecdotal example, a produce grower in Florida described to us an unexpected improvement in quality due solely to implementing end-to-end lot tracking. He noticed that when he scanned cases of strawberries in the field, together with the badges of the pickers as they delivered their cases, the number of cases rejected because of unripe berries dropped substantially. The grower didn’t say anything to anybody, but the pickers realized that they were now unequivocally tied to each case they picked, and began exercising more care.

In short, the Food Safety Modernization Act will require substantial changes to the operations of everyone in the food chain. Many of these changes are in record keeping and reporting, especially around lot tracking. Many more are in the quality control area. Because the FDA now has new powers, and the personnel to use them, compliance with the act becomes very important from a purely legal standpoint. But we believe that improving quality, implementing lot tracking and tracing software, analyzing and reporting on the state of the entire enterprise, and shifting some tasks to mobile devices would result in substantial returns on investment, even if FSMA did not exist.

SAP and Deloitte have jointly developed a food safety assessment program to assist our customers in evaluating their readiness to implement the requirements of the Food Safety Modernization Act. This program consists of two parts: a consulting phase to analyze strengths and weaknesses of customers’ current compliance posture and an implementation phase to correct any deficiencies with software, training, and improved processes. For further information about this program, please contact Steve Phelan at Stephen.Phelan@SAP.com or Adam Mussomeli at amussomeli@deloitte.com.

Steve Phelan is an industry principal for consumer products at SAP. Over the last few decades, before his tenure with SAP, he founded two software companies devoted to consumer product manufacturing and R&D. He now helps customers understand the history and future trends in the consumer products industry, especially relative to SAP software and strategy, and especially in the food and beverage market space.