The latest version of the SAPNetWeaver Cloud Supplemental Terms and Conditions agreement contains some interesting changes including pricing details about OnDemand integration platforms and an additional description of the NetWeaver Cloud Portal.

Let’s take a closer look at some of these changes.

Integration with On Premise Platforms

One of the most important features of the SAP NetWeaver Cloud is its ability to facilitate hybrid (OnPremise / OnDemand) scenarios. Thus, a long section in the agreement regarding such interaction received my particular attention.

It looks like you will be charged for each non-SAP connection. Since I don’t have access to the Order Form, I have no idea what the prices for such connections might be. However, customers considering such scenarios – I have no idea if the Cloud Connector could still be used – should be aware that additional costs are involved. This decision is unfortunate since it forces enterprise developers wanting to connect the platform to non-SAP systems to consider alternative platforms where such pricing isn’t present. I’ve always assumed that one goal was to attract such developers to the platform yet such financial disincentives are detrimental to such efforts and hamper the creation of a broader developer ecosystem.

I assume that this also applies to custom-developed OnPremise applications as well.

I’ve tried graphically to depict my interpretation of the impact of this paragraph.

Note: In my diagram, I’ve used Oracle Fusion applications as an example of an OnPremise system from another vendor.  Other applications from other vendors could have been used as well. 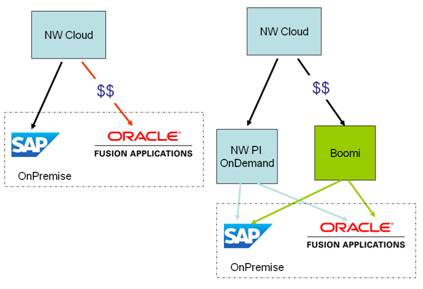 I have no idea how SAP is going control the connection characteristics. For complicated applications that pull data from multiple sources, I fear that this will be an administrative nightmare.

One motivation of this decision is to promote SAP mediated middleware solutions at the expense of competitors.

SAP has always emphasized that their hybrid environment is open to third party integration platforms. 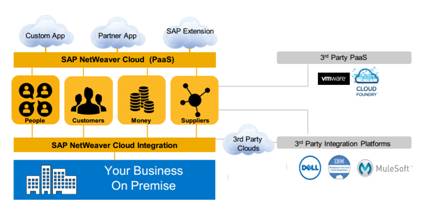 The current implementation for the replication for SAP’s Cloud Payroll uses Boomi which demonstrates that this integration is technically possible yet it appears that there will be a financial impact for such usage in the future.

This paragraph is rather intriguing for a variety of reasons:

With respect to the Portal (if Customer has purchased the Portal subscription), SAP warrants at least ninety-nine point two percent (99.2%) System Availability over any calendar month.

What is interesting is that there appears to be a base SLA without a distinction between the various NetWeaver Cloud editions (Lite, Professional, Premium, and Premium Plus). Thus, one option that SAP has yet exploit is to make customers pay for better SLAs.

The fact that the SLAs are disclosed at all is important inasmuch as some competitors such as salesforce.com offers no SLA, only committing to “commercially reasonable efforts”.

The pricing models for the NetWeaver Cloud still aren’t publicly known but some pricing model based on the number of end-users is possible. Thus, I’m paying particular attention to how end-users are defined in this document

The older version of the agreement contained this description:

Only Named Users are permitted to access the administrative areas of the Platform. End Users are limited to screen-access of the Customer’s Applications via the Internet.

The new version has this description:

(e) End Users must be licensed as Named Users.

I’m troubled by this change, because I’m not sure how this work in consumer-focused use cases.

At this blog demonstrates, such legal agreements reveal important details about SAP’s Cloud strategy.  I’ll be paying particular attention to such agreements as the number of Cloud-based solutions multiply and the number of hybrid environments increase.