The XComponents are probably the most downloaded extensions for SAP Dashboards / Xcelsius (with over 10,000 downloads to date) and they are used in production dashboards by some of SAP’s largest customers.

However, as they are essentially a spare-time project for me they are mostly undocumented which has left a few interesting features underused. This is particularly true of the XGlobe. The image below shows the XGlobe in action and clicking here will take you to a live version of the same dashboard) 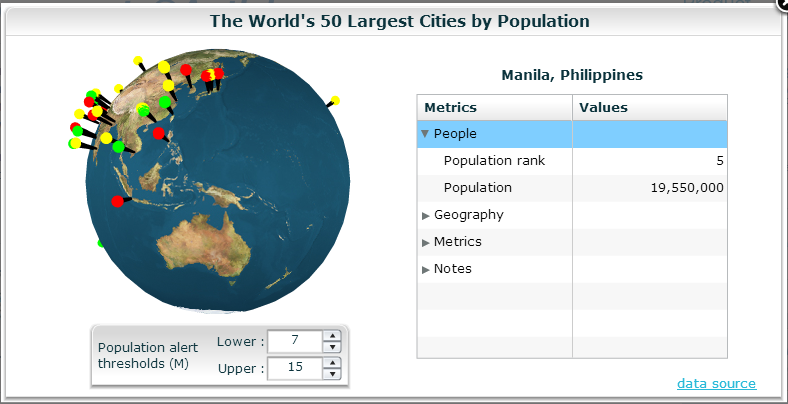 There is some controversy about the XGlobe. Some visualization purists have suggested that it has no place in real-world dashboards as it is too gimmicky and takes up too much screen space for the value it adds. However, on the other hand I have had a number of people tell me that users like it. In fact someone recently wrote to me to say :-

“I’m successfully using XGlobe as an enhancement in one of our dashboards that has been “live” on our internal platform for some time now (the users love the new feature !)”

My view is that, given we know that one of the big issues with Business Intelligence in general is getting users to use it at all (hence the widely reported 20-25% usage rate), we should at least balance visual efficiently with end-user appeal (more discussion on this in a previous post of mine here).

Either way, I have recently had a few requests about how to use some of the features of XGlobe so I thought I would make a short (4 min) video outlining the basics. So here it is :-

I hope it is useful.