So take a few minutes to make sure it gets the visibility it deserves!   You’ve optimized the words; now optimize your blog for social sharing.

I love the great blogs coming up on SCN every day.  Really great stuff.  And I love sharing good content with my friends on Twitter.  But I’m seeing every day that most everyone is not taking advantage of a couple of easy steps that will help get optimum visibility for your great content.

Use Hashtags in Your Blog Title

Hashtags are a powerful way in Twitter to get your content to people that are interested in the topic. If you’re new to Twitter or new to using hashtags, I wrote a blog on the power of hashtags last year that gives you lots of reasons to understand and use the right hashtags to reach your audiences – and the blog is still relevant today.

I’m sure you’ve noticed we recently updated our blog system to make it even easier for people that like your content to share it with their followers on Twitter, LinkedIn, Facebook, and Google+.  (See my blog from last month about our updates to social sharing.)  We even show the number of times other people have shared your content so you can see if it’s getting traction.

Those buttons are pretty powerful little things themselves.  For example, the Twitter button does a number of things when you press it:

(I’ll get to that last one in the next section.)

First, let me talk about hashtags.  Say you wrote a blog about the cool things that are happening at SAP TechEd around mobile technology and you’d like people that are interested in mobile and TechEd to see your blog.  If your title says “What’s Hot in Mobile at SAP TechEd”, the Twitter share button will create a tweet that says those exact words – with no hashtag.  On the other hand, say you write your SCN blog and use the #Mobile and #SAPTechEd hashtags as part of your title:

“What’s Hot in #Mobile at #SAPTechEd”

Now, when the Twitter button creates a new tweet, it will have the #Mobile and #SAPTechEd hashtags in the tweet that any of your readers create.

If you don’t do this, you as the author, have to rely on the reader to be proficient in the use of hashtags AND to know which hashtag you’d like to use for your article – NOT very likely that your readers are as savvy on hashtags as you are.

So… next time you write a blog in SCN, make sure to use hashtags in the title.

Now, what is this one all about?  Well, the other cool thing that the Twitter button does – and I bet you probably didn’t even realize this was happening – is that, if you put your Twitter handle in your SCN profile, the Twitter button will automatically grab it and include it in the reader’s tweet of your blog.  Pretty sweet.

This actually helps in a three of ways:

OK, you’re sold?  How do you do it?  Let me explain.  It’s actually pretty simple.

Go into your SCN profile and add two things (I know this is a little kludgy, but it works):

Putting It All Together

Here’s a great example from a recent blog by Tammy Powlas .  Tammy is using two hashtags in her blog title – both #ASUG and #SAPTechEd. That will get the attention of anyone following topics about ASUG and anyone interested in watching what’s happening about SAP TechEd. 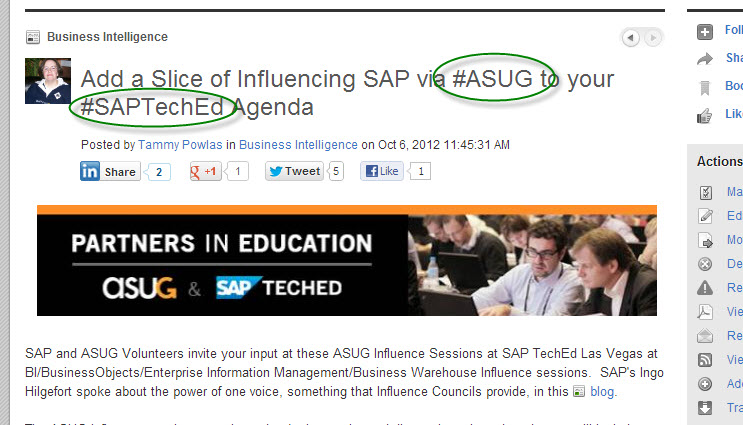 When I press the tweet button right now, here’s what it looks like without me having to do any editing to add hashtags.  Great! 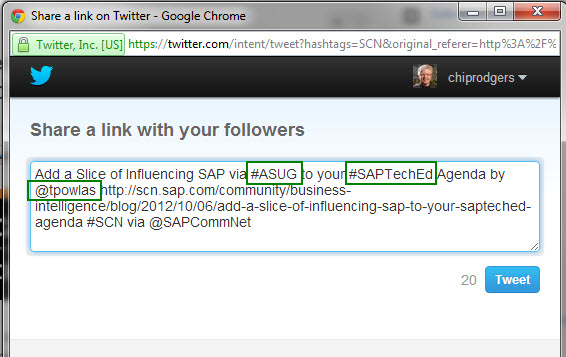 So… I’m hoping that from now on, when I see great content and want to get the word out to my friends and followers, I’ll start seeing hashtags in titles and won’t have to do any editing before I send it.  And I hope you will start seeing more shares, follows, and greater visibility for your masterpieces.