The History and Landscape of Social Media in China

The first social media model in China is bbs – Bulletin Board System, i.e. forum. I personally believe that bbs was and still is the most successful social media in China. And it’s very popular in China and I’m extremely fascinated by its longevity. The bbs started in late 1990s before QQ made debut in 1999. QQ has become No. 1 IM player in China. After Myspace, Facebook, Twitter and YouTube became popular on the east side of Pacific, more and more Chinese enterprises and startups entered the world of social media. Nowadays, Pinterest-like, Zynga-like, Flipboard-like social media platforms are blossoming in China.

The following graphic illustrates all main social media players in China and their global corresponding ones. As you can see from the graphic, the landscape is much more complex and competitive in China than in the global world. 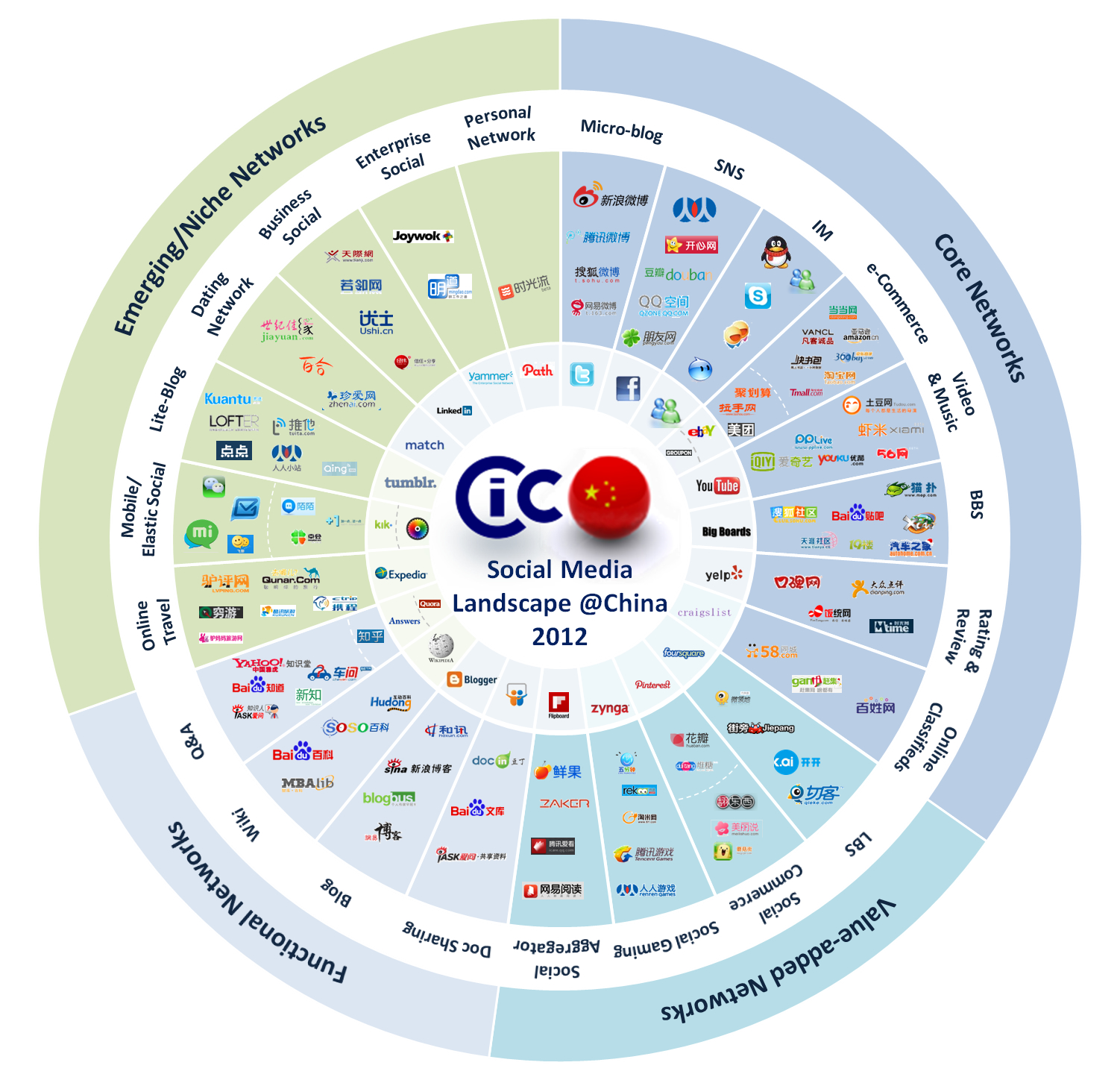 All in all, the above summary describes the China social media in a nutshell.

It’s been 2 years 10 months or so since SCN was established in China. Its social media expansion wasn’t started till Q3 2010. As Twitter, Facebook, YouTube and LinkedIn have bee tightly linked with SCN, expected and unexpected benefits have been achieved. I decided to kick off social media expansions in China without any hesitation. Firstly, I started with Sina Weibo (equivalent to Twitter), Kaixin (equivalent to Facebook) and Tudou (equivalet to YouTube). The strategies of social media expansion in China are 2 folds, one is content-driven growth, i.e. sharing the good content on SCN and its global social media channels through these China social media platforms. The other one is collaborative orchestrations with other SAP official accounts and influencers (both internal employees and external people), as well as with SCN itself. For example, SAP China, SAP Labs China, SAP TechEd, SAP Career, Sybase China, SAP Cloud and etc. The following are statistics of SCN social media channels in China.

As it’s the very social age currently, more and more social products are created. For instance, Pinterest is the new phenomenon in the social market. Similar products, e.g. Huaban and Duitang, appeared in China. Lately, Sina launches a new Pinterest-Like product, which is called Sina Weikan (micro journal). Since the SMJ is well integrated with Sina Weibo, which has the edge over Huaban and Duitang, SCN created 3 SCN Weikans.

LBS is another important charcater in the social age. Consequently, mobile application and service are another buzz in the market, especially in China. By the end of 2011, the total number of mobile subscribers are over 1 billion according to top 3 Chinese mobile operators. Tencent foresee this big opportunity and launched WeChat application in the beginning of 2011. WeChat (Weixin) is another new social product, which provides mobile phone text and voice messaging communication. Since WeChat is one of the Tencent products, QQ id can be used to log in the WeChat directly. Because of the large user base of QQ (1 billion+), the number of WeChat registrations hit 200M within 20 months. SCN purchased VIP QQ id 86 726 0000 (86SCN0000). 86 is the telephone country code for China and 726 represents SCN. SCN official WeChat account was set up yesterday. SCN will use WeChat to broadcast both text and multimedia message to the subscribers in a mobile way. WeChat app supports iPhone, Android, Windows Phone, Symbian and web client. This SCN official account can be subcribed via SCN QQ id (86SCN0000) or by scanning the following QR code. SCN will continue to try, monitor and adjust the strategies and tactics in order to build up SCN’s presences and interact with netizen in the SAP Chinese-speaking world.