I believe readers of this blog aware of new B2B Add-on for SAP PI through available content on B2B integration space. Those who are not aware, it’s new offering by SAP for B2B integration in SAP PI space.

In this blog I’ll discuss step by step configuration in inbound EDI (EDI from Partner) scenario.

In this example scenario I have configured file sender to pick EDI Message, instead of AS2 Sender or some other technical adapter. Receiver side, instead of IDoc receiver I am storing IDoc in XML format in file system.

To maintain the focus on Configuration using new B2B adapters, I am not going into details of ESR objects here.

Step 4. Acknowledgement generated and sent back to sender of EDI message [Only available in case of ANSI X12 messages now].

Interface 1: From EDI Sender to EDI separator adapter [Step 1 and 2 above]

Interface 2: From EDI Receiver to backend system [Steps 3 and 5 above] 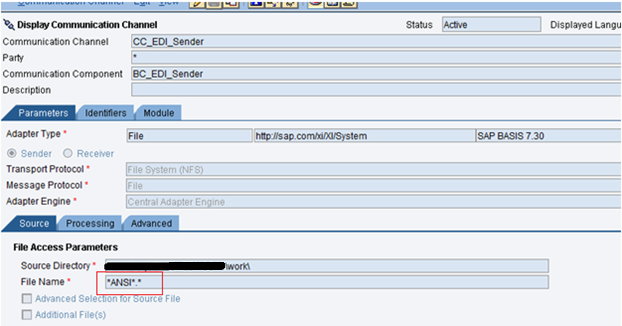 I’ll describe the reason to keep file name as ‘*ANSI*.*’ later in the blog. 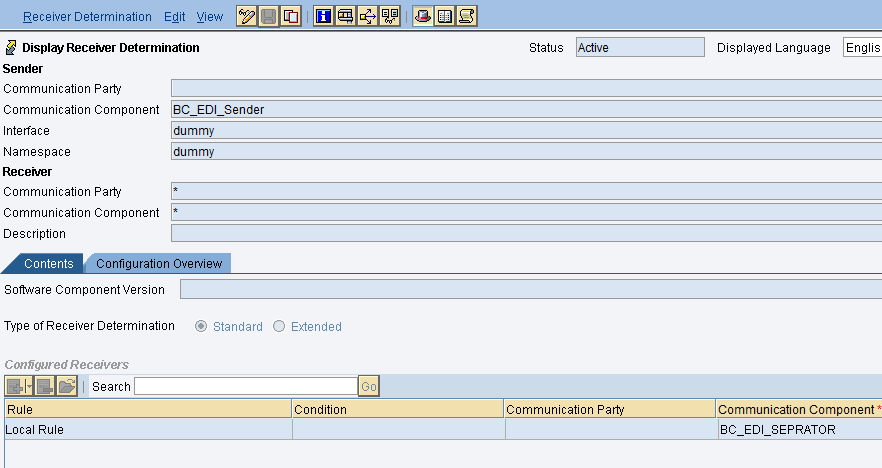 No mapping in this interface. 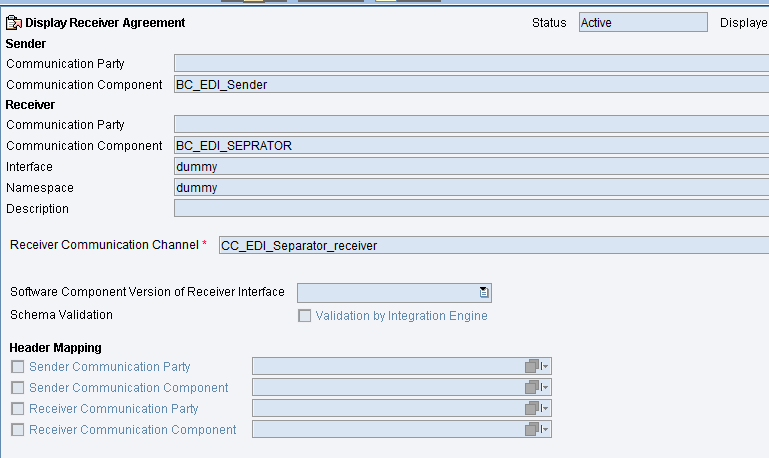 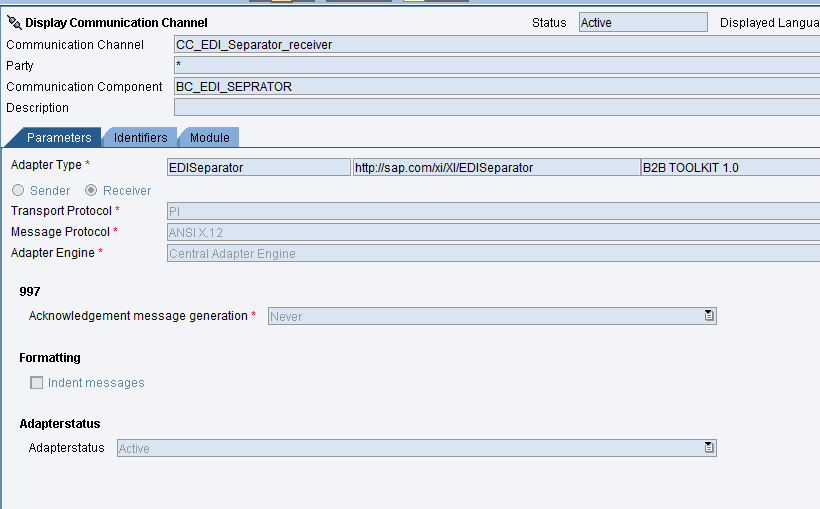 It is required to configure two interfaces to process these messages.

Here I have configured interface only for Transaction 810, Version 4010, Sender ID 1111, and Receiver Id 2222. Similarly it can be configured for other message. 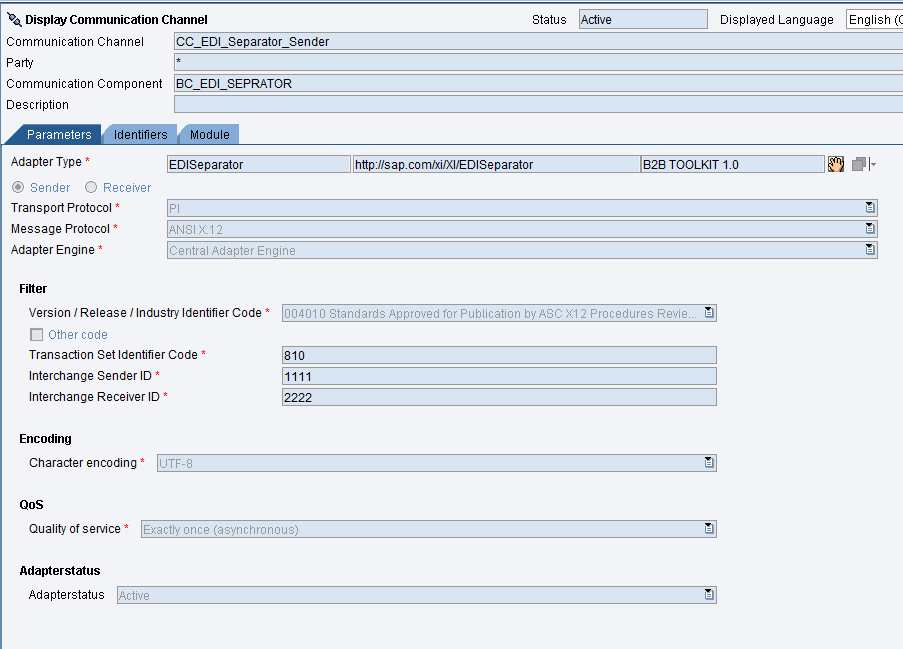 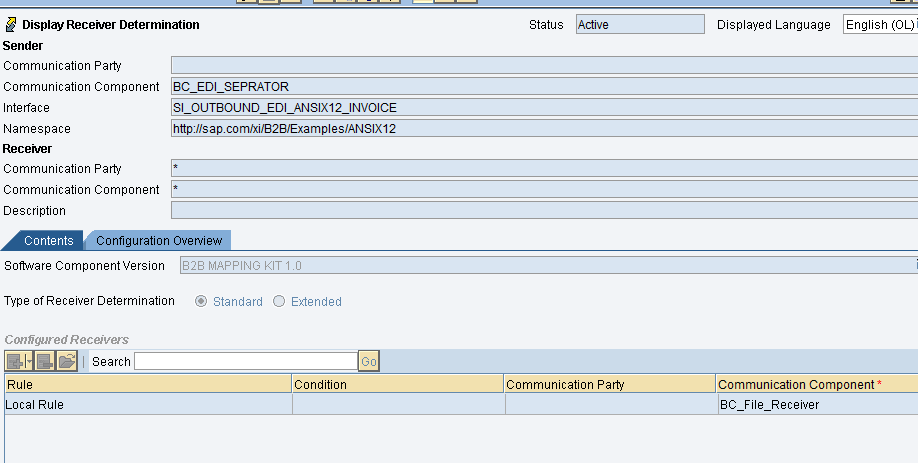 In ESR mapping has to be developed to map EDI XML to Invoice IDoc. 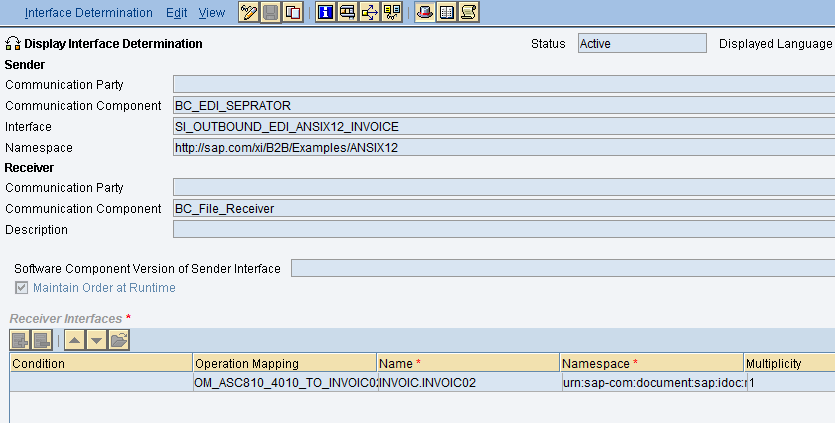 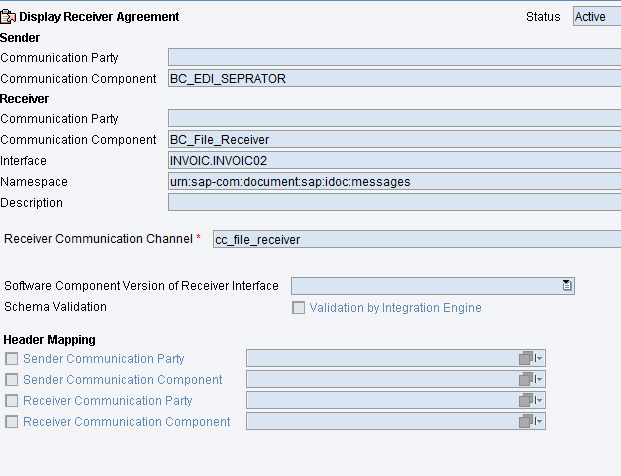 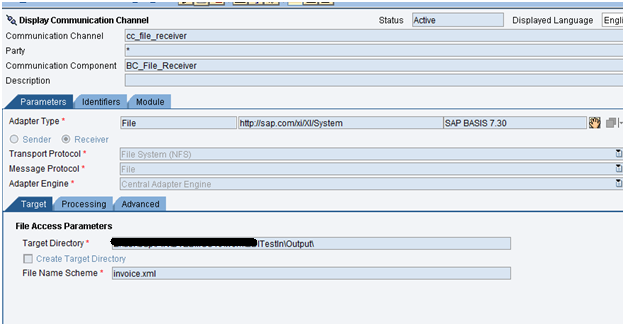 In similar way interface can be configured for other separated message. Please find below the screenshot of the EDISeparator communication channel which I have configured in this scenario. 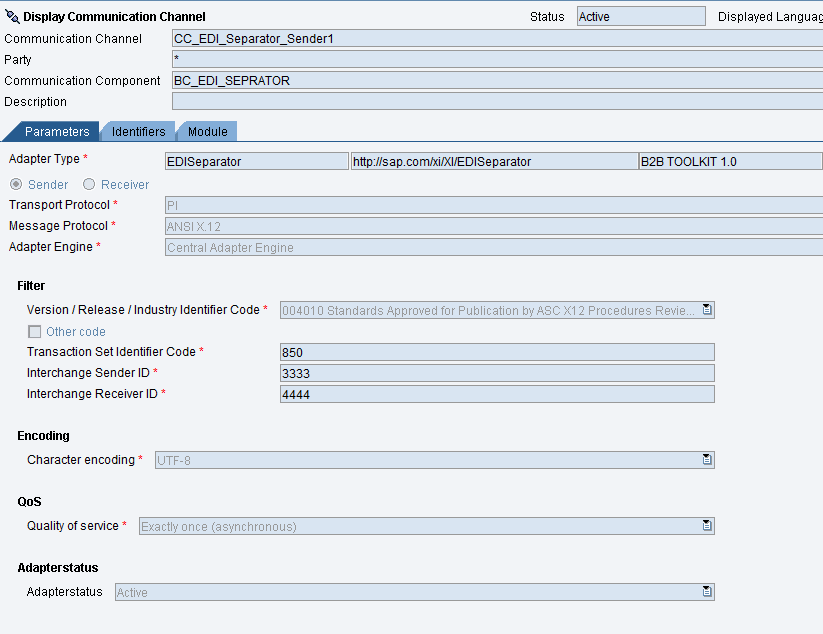 You can see in the above screenshot, first message belong to the interface which split the messages and other two messages belongs to the 810 and 850 message processing.

In real-time scenarios it may possible that same EDI partner sends different formats of messages, say ANSI and EDIFACT. In that case we have to configure separate EDISeprator receiver communication channel in Interface 1 for EDIFACT message Foramt. Route the message based on content [message format] to the different receiver [EDIFACT or ANSI].

Since in interface1 EDI to EDI XML conversion not occurred, so inbound payload remains in raw EDI format [not in EDI XML], so it is not possible to add condition using XPATH in receiver determination. Possible solution from the discussion raised in SDN:

1) Use different communication channels on sender side. They may point to same input folder where you can provide different file names for EDIFACT and ANSI bulk messages respectively.

I have opted this solution in this example for simplicity and to maintain focus on the main objective.

2) Wait for new support package for B2B where SAP planning to provide this enhancement.

I believe from the planned enhancement there will be no need to configure message format in EDISeparator receiver.

a) Write a custom adapter module (to be used on sender side) which can read incoming message and create an XML message with root tag describing the message type (say EDIFACT or something) based on received bulk message. You need to add these XML tags after reading the headers of the incoming EDI messages. Add this custom module to your sender channel.

b) Add two different receivers to the same scenario. And provide condition based on value of XMl Tags you have added during your module development.

c) Now your message is routed in the right manner to the respective EDI Seperator receiver channel. Write another module (or enhance the same adapter module) which can remove these XML tags and convert the payload  back to plain EDI bulk message (which you received initially) and use this module in EDI Separator receiver channels.

Would request you to send ESR and ID part step by step please send us step by step documents edi to idoc/ifle.

when try to implement the same scenario:

Yes. It is known issue for wrt documentation and is already fixed. EDIFACT is not in caps letter. You have to use "localejbs/EdifactConverterModule"

Just a quick question will it work the same way if file contains two 850 (Inbound purchase orders) for either same or diffrent partner .

I tried to implement the same way for EDIFACT messages but my Sender EDI separator channel is failing with reason no Message type found or couldnot find messaeg type.

Any idea or example for EDIFACT inbound processing or what values i need to fill under Filter or Sender Communication channel for EDI separator.

Also any idea how to setup outbound messages from SAP to PI to point to two diffrent interfaces setup for 2 diffrent partners.

I did something and now able to see some progress in RWB , but now I am getting error

I am usinng below EDI header

And have setup this in Sender EDI separator channel .

Am I mising any PI seeting needed for EDI separator , I read in document some EDIFACT tables are there do I need to do anything with that.

I believe you are referring to EDIXML to EDI convertor module. That is required to convert Business document in EDIXML format to EDI and vice versa.

I have setupped EDIFACT inbound scenario similar to yours , but after my EDI message is processed through EDI separator (which I see processed in MONI) my another receiver channel for EDI separator where I mention sender ID/Qualf , Receiver ID/Qualf is failing giving message " No communication channel is found for sender ID/Qul etc.." this error I can see in communication channel monitoring.

Please suggest if you have tested EDIFACT inbound and its working, or if you have any idea of issue I am facing.

I'm also struggling with the inbound EDI scenario and I'm stuck in my B2B Integration Cockpit.

I'm trying to load EDI and XML message into it, but without any success.

But no response yet. Looks all (too) new to me and no one really tested it.

Sorry I didn't updated thread but I have actually successfully resolved this.

Let me know if you need any info and share yours email ID I can send you screenshots as how I have enabled also If I could be of any help, But I have based my implementation more or less on  Rahul's thread only with few tweaks..

Can you send me screenshots of you B2B Integration Cockpit? Did you use it?

You can send it to dimitri.sannen@thevaluechain.be

Thanks for the Blog, it is really helpful.

I would like to understand what is the source structure that we are going to use to map with the idoc(target message).

I am not really sure of this B2B, but if seeburger adapters are installed there will be pre loaded standard structures available on behalf of EDI ctsructure.

Can you please let me know.

Take the EDI content manager (within the B2B Integration Cockpit) and generate an XSD. Export it and use it into your ESR as source message.

Thanks for the clarification Damitri.

Message could not be forwarded to the JCA adapter. Reason: Channel configuration error: Value with name rcv.handleplain not available.

I have as well raised a thread -

Wanted to check in this forum if any one have encountered such issue.

I understand my question is not related to above thread but wanted to ask this here.

Apologies for the inconvenience.

We have a requirement to send 997 back.

Please help me how to go about it.

Thanks so much for this blog. Very detailed and easy to follow.

I tried creating the inbound EDI to IDoc scenario just like you described here.In the sender EDISeparator channel I added the X12ConverterModule. I m getting the error saying the configuration is missing for sender service EDI_Separator. But I have the integrated configuration activated for the same. 1 thing I noticed is if I take out the converter module from the sender ediseparator channel, this error is gone, and the message reaches the mapping, but fails in mapping since the XML conversion did not happen. Any ideas on why this is happening? Are we missing something in the B2B Addon install?

Thanks a lot in advance!

You need to associate the integrated scenario to control key. For this first you have to import the X12 B2B content. This can be done from the integration cockpit http://<host>:<port>/b2bic

After the import is successful you need to go to the Control Key Scenario Association UI and associate the run time scenario with the control key.

Add the module as before and execute the scenario.

I did the control key scenario association to the scenario, but still getting the same error. Not sure if I m missing something else.

If all the configurations are done and you are still getting the error then I need to see the error trace in order to tell the exact problem. Also, I would like to check the input payload which you are trying to send. If you don't want to put the payload on SCN then you can send it to me via mail (ruchir.sinha@sap.com).

Could you check with the BASIS colleagues whether the B2B files for X12 are imported properly or not? If not please ask them to import and then define the scenario association.

Please open a separate thread with your question. The space here is getting too narrow.

Also, other people facing the same issue can find back the answer easily.

Moved it to another forum.

having a quick question since we are not doing EDI to XML conversion in Adapter, so how we translate the data to Idoc, do we do using PI graphical mapping(if yes how?) or and other add-on mapping?

In B2B Mapping Toolkit, some standard mappings are available for idoc to EDI and vice-versa. If it is not available for you then export the EDI format as xsd and import as External Definition in ESR for mapping to target/ Sender Idoc.

Really a good blog, thanks

Thanks for a great blog Rahul.

I think I miss something obvious?

When converting EDI2XML or XML2EDI how does the adapter modules know which "Control Key" in the "B2B Integration Cockpit" - "EDI Content Manager" to use?

You can fill the entries in B2B_CTRL_IF table or Control Key Scenario Association under Editor, to identify your interface.

Below is the screenshot.

Below are the entries that you can fill for your interface.

5. Interface Name (For your interface Receiver/Sender) where you are doing conversion)

6. Interface Namespace (For your interface Receiver/Sender) where you are doing conversion)

This will pick the corresponding control key once the parameter matches else uses default control key with .*.

I have a small question like if Incoming EDI message comprises of only one message(In my case  I got only 823 message) then can we use same EDISeperator adapter or can use file adapter with FCC parameters.

Can any one help me how to achieve in case of single EDI message and I got EDI 823 message as a file.

We have similar requirement, any pointers in this direction will be helpful.

My scenario is inbound processing required for EDI 823 files sent by vendor.... Do I simply need to create SFTP sender and IDOC receiver or I must create EDISeparator Sender and EDISeparator Receiver first