The McLaren Group, known for its Grand Prix racing team and iconic Formula 1 cars, announced earlier this year that it aims to use SAP’s portfolio of high-performance solutions to improve efficiency and expand their performance capability:

“SAP HANA will boost the speed and depth of Vodafone McLaren Mercedes’ telemetry technology, enabling us to look at much larger data sets and ask more complex questions; and SAP’s Rapid Deployment Solutions and mobile apps will empower everyone across the business with the real-time information they need to stay ahead.”

CNN recently covered McLaren’s driver Lewis Hamilton explaining how they use the telemetry data acquired from a F1 car: 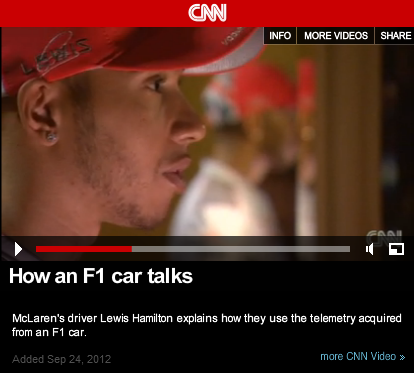 McLaren’s CIO Stuart Birrell explained the benefits of HANA in more detail at a SAP Forum event in London earlier this year:

Birrell told audiences that data is fundamental to the racing team’s success. “We generate gigabits of data every weekend off every car and analyse that in real-time to make decisions,” said Birrell. “We monitor everything – the movement on the suspension strap, what’s happening in the engine. There are probably 120 sensors in each Formula 1 car.”

The information generated by the cars during a race is sent back to McLaren’s on-site garage in real time and then back to the head office in Woking. He added: “Getting that information is critical. We probably run one thousand simulations a minute during a race, so by the end of the first or second lap we have a 90% probability of the outcome.”

McLaren also uses the data to retrospectively analyse its cars’ performance on specific tracks to help the driver understand how to best race the car. “Monaco’s track hasn’t changed for 30 years, so we can look at years’ worth of data and see what happens to a suspension arm on certain corners and monitor that,” said Birrell.

Birrell stated that the company’s investment in data over the last 10 years had been “huge” and this is why it was now looking to SAP’s HANA.  “We are working with SAP on the HANA platform to turbo charge our analysis. It needs that next generation,” he said. “It needs stepping up a gear to get it to that last one percent. Many races are often won within seconds and finding that small percentage difference between us and Red Bull or Mercedes is absolutely fundamental.”

Jonathan Neale, the Managing Director of the McLaren racing team gave more details of how the team approaches performance management at similar event a couple of years ago.  The green lines below show Hamilton’s curves compared to that of his team-mate Jensen Button. You can see that the two curves aren’t quite identical – for example, in most of the turns, you can see that Hamilton brakes a fraction of a second later than Button. By comparing the two driver’s performance, each of them can get detailed feedback on things they could be doing differently to improve their performance. In addition to the engine sensors, video and GPS is used to work out the best line to take through each bend: Telemetry and Benchmarking in Your Business

Real-time “telemetry” data is now a real prospect for your organization, too. But just getting more data, faster, is pointless — unless it’s being used to change business performance.  Just like McLaren, one way to do that is to make extensive use of benchmarking on every aspect of your business process, to try to uncover the areas where you can get an edge.

Here’s an example from a few years ago, when the UK criminal justice system used SAP BusinessObjects to produce “waterfall charts” showing the performance of different local Magistrates Courts.  The red bars show the cases that ideally would have been avoided, having been dealt with much earlier in the sentencing process – for example, when a guilty plea is lodged only very late in the proceedings, having wasted a lot of the court’s time and money. It turned out that different courts had very different profiles, even when adjusted for the local differences in demographics and other factors – in other words, the courts differed in which parts of the process they excelled at. And so, just like Hamilton and Button, the aim was to compare performance and try to bring each part of each court’s process up to that of the highest performer, making everybody better off.

What processes could you be benchmarking in your organization, using internal or external data? http://timoelliott.com/blog/2009/08/grand-prix-business-intelligence.html Telemetry for The Rest of US?