The overall message at first:

But before we go into the details of how how the integration looks like let me quickly introduce Google Drive.

What is Google Drive?

On a very high level Google Drive is an online storage that allows you to store your documents and access them from anywhere using a browser or one of their mobile apps.

Google Drive was only announced recently. Before that Google already had a similar product called Google Docs which now emerged into Google Drive.

So you might ask what’s the difference between Google Docs and Google Drive. Well, let me start with Google Docs.

Google Docs already allowed you to do several things:

With Google Drive applications can now allow to save their proprietary file formats into Google Drive as well and associate a standard file editor with it. This sounds trivial but it is extremely useful for the user:

How does ByDesign integrate with Google Drive?

In the past you were already able to upload files into ByDesign and attach it to most of the business documents such as a customer, a supplier, a sales order or a purchase order. You were also able to just link other documents such as websites.

Now you can directly access your Google account and with that all of your documents on Google Drive directly from any Attachments screen in ByDesign. This allows you to 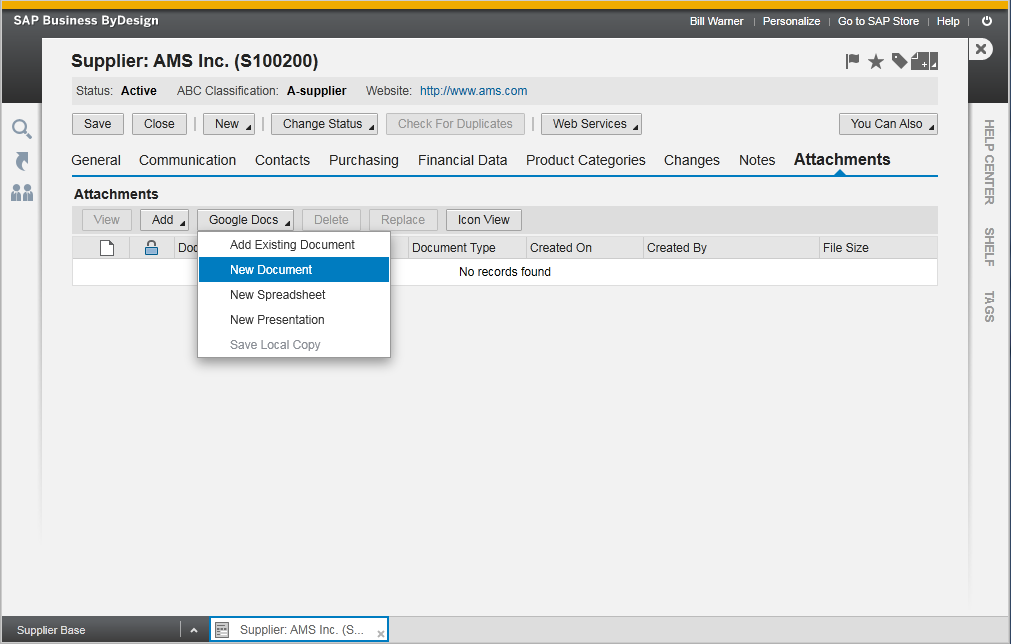 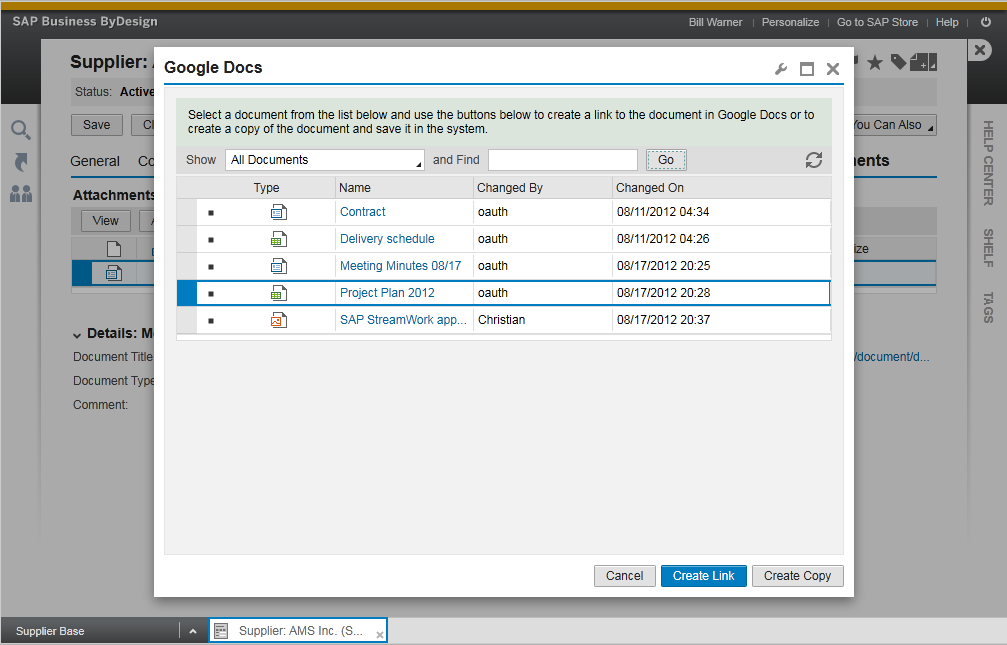 You can also watch a video I took last year of the prototype of this integration here on YouTube. You will recognize that the search feature wasn’t available yet in this early prototype.

First the administrator of ByDesign has to add the Google Docs integration to the scope of the ByDesign system.

After that he needs to set up a OAuth client ID on the Google domain. If the company is using Google apps for their enterprise he can register it for their own domain. This can be done on the website http://code.google.com/apis/console.

The client ID and its client secret have to be saved in the fine tuning activity for Google Documents Attachments in ByDesign.

Client registration of Google in ByDesign

Now that ByDesign in general knows that it’s allowed to access Google, each end user has to link their ByDesign account with their Google account. This can’t be done by an administrator because only each end-user has access to both of his accounts.

For that there’s a self-service in the Home work center called Edit Access Permissions for Web Services which will guide the end-user to his Google account to grant his ByDesign user access to the documents on his Google Drive.

Granting ByDesign access to my documents on Google Drive

Google Drive is a great real-time document collaboration tool. Even though several other tools exist in the market this is in my opinion one of the best tools. Especially because companies start using Google Apps such as Gmail, Calendar and Google Drive for their enterprise now and replace on-premise solutions with this complete cloud based solution.

The integration of ByDesign with Google Drive is a great step forward to bring the ERP system very close together with real-time document collaboration. The ability to be able to copy files and keep a snapshot of it also for later reference is an additional plus.

Using Google Drive for document collaboration also allows you to work together closely with your customers, suppliers and other business partners, and at the same time having a holistic view on the related business documents in your ERP solution.