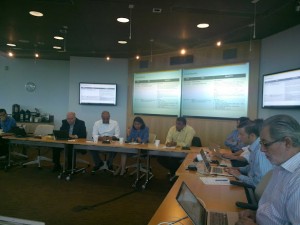 I recently had the opportunity to attend a briefing with 16 bloggers at the SAP Labs in Palo Alto. It was a day and a half of sessions covering Cloud, Mobility and HANA. Stacey Fish was kind enough to set up some 1-1 meetings with the SAP HCM team so I swapped them for the HANA portion which john.appleby3 made sure to let me know was a strategic mistake on my part 😆 . The SAP Global communications blogger/influencer program is lead by Mike Prosceno and they do great job of getting some of SAP’s toughest critics as well as key senior level SAP executives together for these briefings. There was quite a bit of information to digest in each session but here are the major things that jumped out at me.

Cloud – The event started with the cloud team and it appeared their main goal was to explain the longer-term cloud platform strategy as well as provide some information on the various cloud products such as SuccessFactors, B1, ByDesign and the OnDemand. Unfortunately the session got off track from the beginning and although attempts were made to get it back on track the general consensus was the message and overall strategy were very confusing. If SAP can’t clearly explain their cloud strategy in simple terms to people who follow and work in SAP for their living how can they expect customers to understand.  I would have given SAP cloud team the benefit of the doubt but mixed and confusing messaging have been the norm over the past six months starting at Sapphire. I hope this serves as a wake up call and the team is aligned with a clear and consistent message for TechEd and Sapphire Madrid, as with the money SAP has spent on SuccessFactors and Ariba, as well as the competitive landscape, there is not a lot of room for error.  On a side note a group of SAP Mentors attempted to provide some clarity around SAP’s Cloud Strategy prior to this event

Mobility – I have been critical of the SAP Mobility strategy in the past but Sanjay Poonen and the mobile team did an excellent job delivering a clear strategy and consistent message. We discussed the overall strategy of Afaria, Sybase, Gateway, Mobile Apps, Licensing and Syclo and some things that jumped out at me were as follows:

Overall I was very impressed as I think after what many would consider a rough patch the SAP mobile team definitely seems on the right track.

SAP HCM – I had an opportunity to meet with several members of the SAP HCM team to discuss the Shared Service Framework, HR Renewal, Mobile HR Roadmap and longer term strategy. While several portions were under NDA enclosed are some of my thoughts on the meetings:

Here are some reports from other bloggers that were at the event:

(Disclosure: SAP paid my travel expenses to attend the influencer event and I even got to see Mark Finnern modeling one of the new SAP Mentor shirts during one of the breaks)