This is my Blog It Forward attempt after being blogged forward by Custodio de Oliveira (cheers, mate!).

And yeah, this is part of the Blog It Forward Community Challenge , you know the drill…

As Matt Harding, when I first heard about the BIF challenge, I also had an uneasy feeling of being used to do marketing for SCN…

That being said, after reading some of the great stories, including Custodio’s (which by the way, I strongly recommend you do, it’s awesome), I can’t deny the fact that the good aspects overcome the potentially bad ones, and so here I am.

In a short: I’m a 29-year-old Brazilian SAP architect, working out of the SAP Brasil office in Sao Paulo.

I’ve lived in Sao Paulo for more than 6 years now, but my home town is Fortaleza, a coastal city in Northeast Brazil.

I’m married with my lovely wife Marcela for 5 years now, no kids yet but we want them, in time. 😉

We do have a beagle though, and boy does she gives us trouble. 😥

But her cute face can get her away of any trouble she gets into. 😉 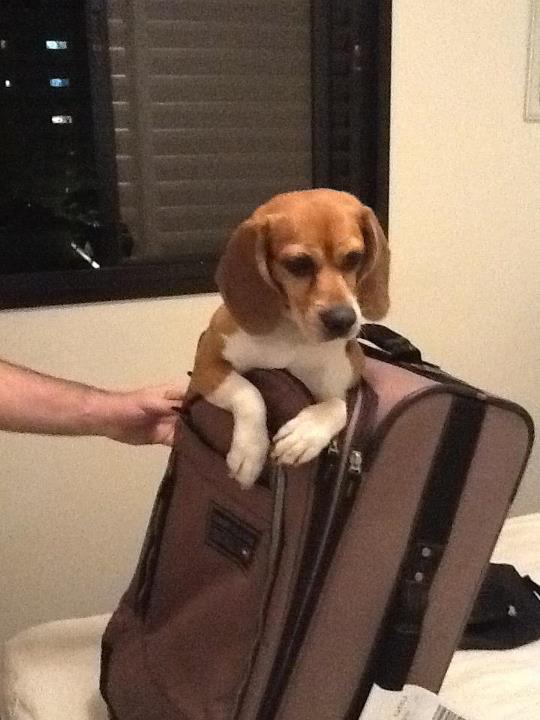 Our Beagle wanting to join me for Teched 2011

I am a geek, no questions asked. I’ve always been, proud to be nerd. Video games are my thing, but I’m also a tech savvy, specially with computers & smartphones. Still having a desktop as my main personal station is a reason to be proud of myself. 😉 Of course it’s a hobby, I like to change the spare parts whenever necessary by myself, it’s part of the fun. Gadget-wise, I’ve been an Android enthusiast, but I sold myself to Apple the moment I got my hands on an iPad. It’s just different from everything else you had ever tried, it’s a whole new experience and it still amazes me from time to time how people can invent new ways of doing things using the iPad (not to mention the groundbreaking possibilities in the enterprise world – but this is not work, it’s fun, so I won’t go into that).

I am also an engineer. I got my B.S. in Electronic Engineering from ITA (Aeronautics Institute of Technology, in a free translation), and that’s another reason to be proud. It’s one of the hardest colleges in Brazil to get in, and definitely the hardest to get out (with the diploma, of course). The thing about engineering though, and few people get this, is not about the content, but the method. Engineering school was a great learning experience and my greatest lesson was how to learn. I can say without a doubt that my greatest quality is to be a very efficient & quick learner – and I’ll always bring that with me. 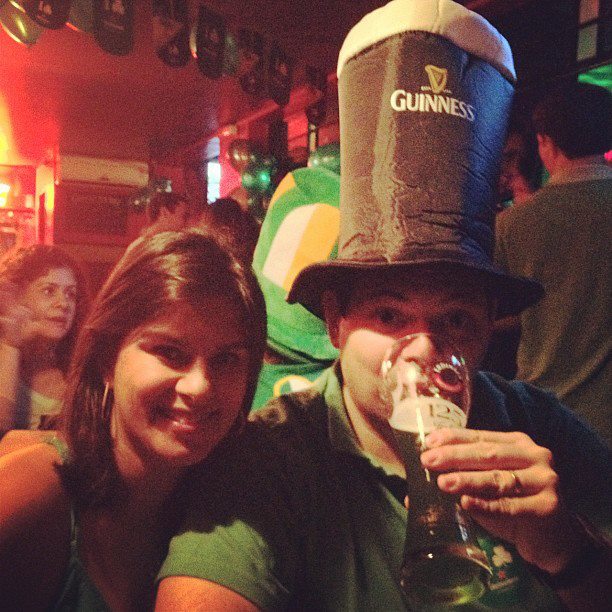 Me and my wife in St Patrick’s day (yes, that’s green beer, and yes, it tasted horrible)

After graduating back in 2004, I even tried to pursue a career in engineering. Unfortunately, there are very few companies in Brazil that do actual product conception & development, mostly it’s about machinery operation & maintenance… Hence by 2006 I had already given up on that and I had joined BearingPoint to become a Java / XI development consultant. From that first SAP project to becoming a SAP Employee and later on a SAP Mentor, it has been a fun ride so far. Lately, I’m focusing on Presales activities for Database & Technology, specially for SAP HANA and all thing around.

If I ever get separated of my wife, it’ll probably be because she could not cope anymore with the several hours I spend in the PC or console playing whatever game is hot by then. 😥 Most recently, I’ve spent my nights in Diablo 3, here is my char’s profile. If you also play, let me know your game tag. 😀

I’m also a huge NBA fan. I do enjoy watching soccer as a regular Brazilian (LOL), but as a child, I never really enjoyed playing soccer that much. My legs just didn’t obey my brain commands, I suppose it happens in the best families… So I used to play Basketball in school and college, and that’s when I started following the NBA. I’m a Los Angeles Lakers fan, by the way, and for those of you who follow the NBA, with Steve Nash & Dwight “Superman” Howard joining the Lakers, rest assured that we’ll be the champions again! 😀 I’m super excited about this next season.

As for a fun fact about my country, it’s not really fun per se but I thought it was noteworthy 😉 :

Now for the questions.

Always be yourself. Unless you can be Batman, always be Batman.

I’d have to say it was my first SAP project, at Petrobras. I had just joined BearingPoint at the time, and I was sent to Rio de Janeiro to spend god-knows how many months in a challenging online integration between Petrobras’s ERP and government web services – it was then the pilot of the Electronic Invoicing project. The success of that very first project later on lead to me being invited to join SAP to become a product manager and guide the development of the what later became the SAP NFE solution).

I was a Java developer with some experience in XML and Web Services integration who had to learn XI in a couple of months and lead the integration team from the middle of the project onwards (the previous technical leader had some misunderstandings with the project manager and was invited to not return to the project). I was coming from a mainly development oriented role, focusing on maintenance of existing code, to a project-oriented business corporate environment. It was really awesome (and of course the fact the project was in Rio contributed to that awesomeness).

Looking back, I can even say it was fun because it was really challenging and yet we were able to deliver it, but mostly it was fun because of the people. I still get in touch with most of the guys from back then, we were really close for a while even after the project finished, and some of them even left the SAP Ecosystem, but we never really “disbanded”. It’s a similar feeling I have with my college and high school friends, but oddly enough I never had that level of personal involvement on any other projects after that one.

I wasn’t invited to join SAP right away, I got plenty time to spend in other projects and even other consulting companies prior to joining SAP.

But that very first project was the reason why it all happened how it did (thankfully!), so it will always have a special meaning to me.

What made me start actively participating in the community and why would I recommend people give it a try?

This might sound cheesy or phony, but it’s a true story.

During the first week of my very first SAP project (Petrobras, mentioned above), I had a session with the XI consultant who was supposed to teach me all about it. He then proceeds to show me two things:

And that was it, literally.

To this day, whenever I think about it, I never know whether I should be pissed off at the guy or if I should thank him.

In short, I started searching for information about that XI thing in SDN. I found a lot of forum threads, great blogs and how to guides, and shortly I learned who were the really knowledgeable guys I should be tracking for more accurate information. If you ever were a XI/PI Consultant at some point of your career, you most likely used SDN as your main reference source. The XI forums were just filled with great people willing to share and contribute. And 10 out of 10 XI/PI consultants will say Michal Krawczyk was the one that stood out the most. Hell, the guy had more points in the XI forums than the next 5 or 10 contributors combined. No surprise he was in one of the first SAP Mentor packs ever, more than deserved. Michal, along with other great guys from the XI forums of that time, like Stefan Grube and Bhavesh Kantilal, were the main reason I started tracking SDN more and more often, until it became a daily habit. From that to start contributing, it was just a matter of time. This was back in the end of 2006, beginning of 2007.

Later on, in 2009, already as a SAP Employee, I had an opportunity to be part of the team setting up the Portuguese & Spanish forums they were launching.

At that time, I started my role as a SCN moderator, and the rest is history. Out of my own experience, I can say that the best way to learn something is to start explaining it to someone else. That’s not news, teachers have said that for ages. The point is that an online platform like SCN allows you to do that teaching/learning cycle several times per day, immensely accelerating the learning curve.

It’s 1972 in Mannheim, Germany. In the room Claus, Dietmar, Hans-Werner, Hasso, Klaus and YOU!  What’s your contribution/role in the company soon to be created?

Heck, this is a tough one. I can’t think of anything I could have taught to these guys, nor I think they’d listen to me. 😆

But I suppose that I would add some latin spicy to these german engineers and try to give them a broader picture of the world, potentially making SAP a transnational company from scratch, with worldwide conceptual & development teams working together since the beginning. Imagine the capabilities and the capillarity the company would have by now, after 40 years of technical excellency and a broader reach. And imagine how better run would the world be by now… 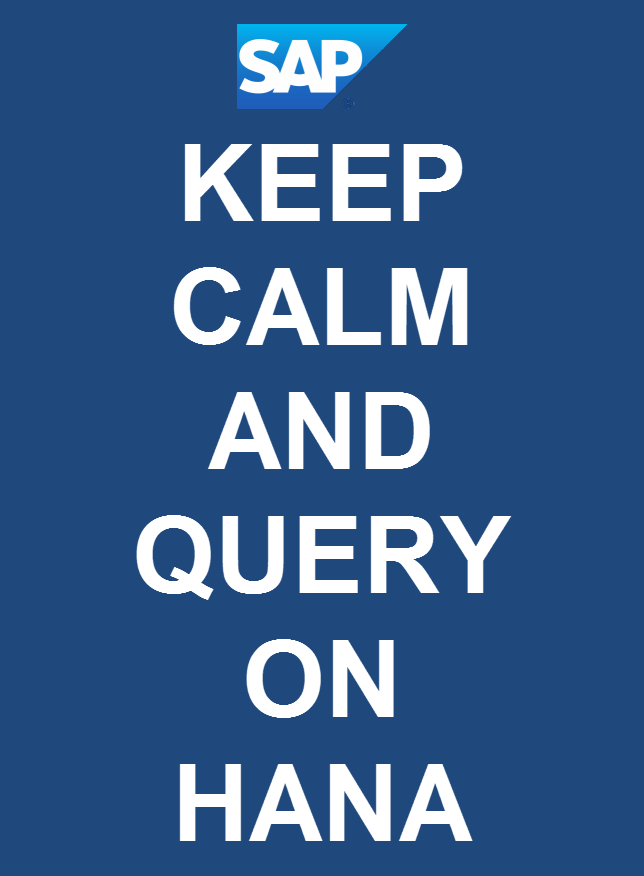 I was bored yesterday…

This has been a great experience and I’m glad I was able to overcome my initial suspicion and join the challenge.

Please respond to the following questions:

After you’re done, please enter a new record and update your blog links in the Blog It Forward (BIF) Chain.

So, after I had published by bif,  a colleague who has just joined SCN as a moderator in the newly created Portuguese HANA Space thought it was really cool. So I thought to myself, what better way to start contributing more to SCN than with a BIF?? Maybe it’ll be the start of a great contribution trajectory, so I’ll add one more person I’d like to forward this to: