TechEd DemoJam 2012: We have our finalists!

Update: the list of DemoJam finalists for TechEd Las Vegas can be found here.

The finalists for TechEd DemoJam in Las Vegas, Madrid and Bangalore have now been chosen! The selected teams will now receive coaching from SAP experts on how to turn a great piece of software into a great on-stage show. Great tech and a great show are the two sides of the TechEd DemoJam coin! 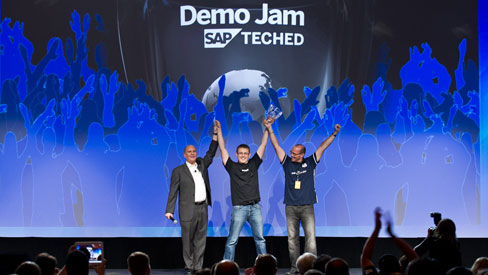 TechEd DemoJam will take place on October 16th in Las Vegas, Nov 13th in Madrid and Nov 28th in Bangalore. Each DemoJam will showcase about seven demos competing for the coveted title of SAP TechEd 2012 DemoJam Winner!

Each demo is presented live on stage by two members of the team who created the demo. Demos are limited to 6 minutes, only running code, no slides allowed, no mocked-up back-ends, no fake UIs, just plain running code demonstrated live. It’s a high flying trapeze act with no safety net, and with the ropes of the trapeze untested. Lots of sweat and stress on stage, lots of fun for the audience.

This year we received 84 submissions across all three locations. In addition to submissions from SAP partners and customers, we also received a good number of submissions from SAP employees demonstrating jointly with customers and partner. All submissions were assessed by a selection committee sourced from across SAP. We are very happy with the quality of the demos that will be shown on stage and very excited about seeing the final result on stage at TechEd!

The winner of the InnoJam event that takes place at each location (InnoJam Las Vegas, Madrid and Bangalore) right before TechEd will also compete at each DemoJam with a demo that did not exit one week before. If you did not submit a demo to DemoJam, here’s your chance to compete and shine: join your local TechEd InnoJam event, build an app in 30 hours non-stop using Design Thinking and a range of SAP technologies presented to you by SAP experts, and win!

Each DemoJam will also feature a demo from SAP, lifting the veil on exciting new technology and applications being worked on at SAP.

Make sure you do not miss TechEd DemoJam! This is an experience that no online video replay can match or even come close to.

Participating in a DemoJam can be easily placed among the most stressful things I have done so far. Yet, it is definitely among the most fulfilling ones. And on top of that, as many presenters from the past years can confirm - it is highly addictive! Good luck to all participants this year, looking forward to the exciting shows around the world!

Thanks Marek for sharing your experience with us! For those who do not know him, Marek is the man in the middle in the photo above and a  multi-winner of TechEd DemoJam. Hey Marek, what about you share with us what you think makes a great DemoJam demo on stage? Dos and don'ts? Either here in the comments or as a separate blog post maybe?

Julien - this is definitely a topic for a longer post! But let me at least try to list a couple of points. Let's call it a decalogue of a demojammer:

Are the Australians gonna sweep the Vegas one again? 😆

Australia has one man in the race in Vegas, but not the same as last year!

It only takes one Australian......