I’m participating in the Blog It Forward Challenge because of Stephen Johannes. If you haven’t been tagged yet but would like to participate, you can add yourself to the list here.

I’m an SAP Mentor and an ASUG BusinessObjects Ambassador. I’ve been called a potential PR nightmare. I do a podcast with some of my best friends.And I just love the snot out of (most of) the business intelligence tools from SAP. You can get to know more about my professional side from my professional blog or this little bit of audio.

But the thing that defines me most is my family. I’ve got a beautiful wife and four amazing kids and they are all making me old before my time and I wouldn’t have it any other way. How do you not love these faces? 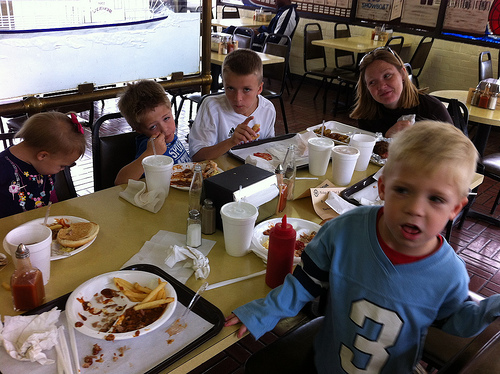 I’m giving my fun fact about Canton, Ohio, my hometown rather than St. Peters, MO, my current town. Canton, Ohio, is the home of the Pro Football Hall of Fame. Alan Page was an amazing athlete who played for the Minnesota Vikings,was inducted into the Hall, and went on to serve on the Minnesota Supreme Court. But the fun fact is that he grew up in Canton and actually spent a few summers doing manual labor on the Hall of Fame while it was being built.

Other fun fact? I did some plumbing work on the Hall of Fame when I was in college. Neither the Vikings, the Hall, or any Supreme Court have called me since.

What is your favorite sport to watch/play or hobby?

Basketball. Hands down. When I was a kid, about the only sport we could afford to go watch (all of once a year) was basketball. I remember going to watch the Cavs play the Magic on Cub Scout night (and being so young I thought the entire Cavaliers roster was going to play against Earvin Johnson). I’ve even got my kids hooked on the sport. So yes, yes I am pumped that Steve Lucas is going to figure out some way to include me in SAP’s initiative with the NBA (hint hint).

What charitable causes do you tend to support?

I’ll support pretty much anything that means something to me and mine (and for charity, I typically cast my net pretty large for who counts as “mine”). My two big pushes this month (from people in our larger community) are the charity which gave their data to Developer Wars at SBOUC and SBOUC organizer Nicole’s Diabetes Ride. Never to early to save money on your taxes by making a donation.

Full disclosure? I only mentioned In-N-Out Burger so it didn’t sound like I only fantasized about napping.

My parents taught me a lot to be sure, but probably the most important was personal accountability. My curfew all the way through high school was “half an hour before I got into trouble” and you know what, I never missed curfew. Did I do some things I probably shouldn’t have? You bet your bottom I did. Did I understand that I did have to make safe choices because any consequences for my actions were mine and mine alone? Yes, I did. I knew which people and places would get me into real trouble and while I may have been out until 3 in the morning I was never with or at them.

I’m blogging this forward to both the Lighting and Thunder from Down Under: Josh Fletcher and Corey Adams.

My two questions for them are: