SAP NetWeaver Gateway 2.0 has within the SAP architecture the role of transparent integration layer to the SAP Business Suite: 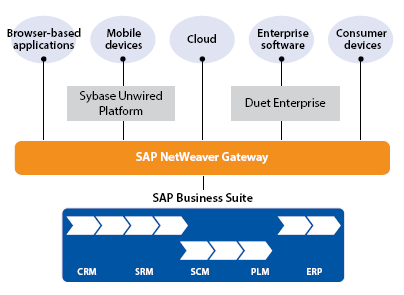 Duet Enterprise is a consumer of the SAP Gateway layer, Sybase Unwired Platform is another consumer for Mobile devices. The access through Gateway is based on current interoperability standards: W3* (SOAP / WSDL) Web Services and OData services (REST protocol).

In the current Duet Enterprise 1.0 FP1 product OData support iswas missing. The direct explanation is that SharePoint 2010 BCS does not support OData consumption. For Duet Enterprise interoperability it is was therefore necessary to unlock SAP data via the SAP Gateway Generic Channel. Sybase Unwired Platform since version 2.1 does have OData consumption support.

From the market (partners, including The Next View, and customers) is urged to include OData support in Duet Enterprise. Main limitation is, however, SharePoint 2010 BCS.

In SharePoint 2013, BCS supports OData consumption. And Duet Enterprise 2.0 can therefore also support the interoperability via Gateway OData Channel. Integration via Generic Channel continues to be supported, in terms of design-time and runtime.

SAP Gateway includes generator tools for Generic and OData channel. Both are subject to the restriction that SAP hierarchical data structure is not supported (no mapping capability). In case of hierarchical data it is possible to ‘handcraft’ the Gateway service in ABAP code. The programming model for custom OData providers is thereby a lot simpler compared to that for Generic Channel services.

Note: we use for exchange of complex SAP structures the XML Funneling architectural pattern, via which we still have the opportunity to utilize the benefits of the Gateway generator tools.

In Duet Enterprise 2.0 the OData-SOAP Bridge is not included; SharePoint 2013 BCS itself can directly consume OData. 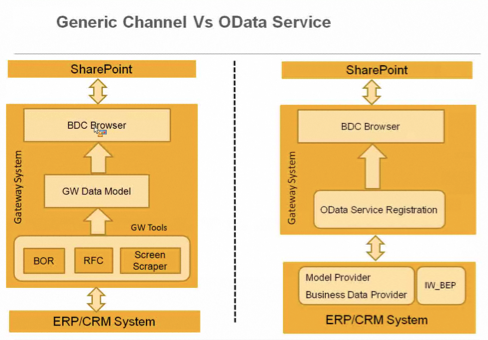