Sharing Research: What IT Managers and Business Managers Want in Cloud Computing

Up until last night I had this comfortable little narrative that went like this: IT executives like cloud computing because it allows them to reduce operating costs in IT. On the other hand business executives like cloud computing because it allows them to realize benefits of new capabilities much faster, sometimes allowing them to bypass IT by ordering software as a service. It’s a great narrative since it shows the ongoing gap between IT and business and suggests that IT is missing more important business benefits, and thus would be have trouble making a business case for cloud computing projects. All I needed was some provocative third party data to back this narrative up.

The death of a narrative

Then I run across this survey from PwC of CIOs and other C-level executives ranking motivations for adopting external private cloud service providers:

If you look at the top three results you see that IT executives believe faster delivery and access to new skills are chief reasons for working with third party cloud providers. Other executives, however, seem to think reducing the IT department budget is among the most important reasons.

Nothing is more annoying to a marketing guy than when facts get in the way of our narratives. So I kept hunting.

Then I ran across this study from CSC about cloud usage that surveyed 3600 cloud computing users “with experience implementing cloud computing” – I read that as being IT people. The results are neatly summarized in this infographic: 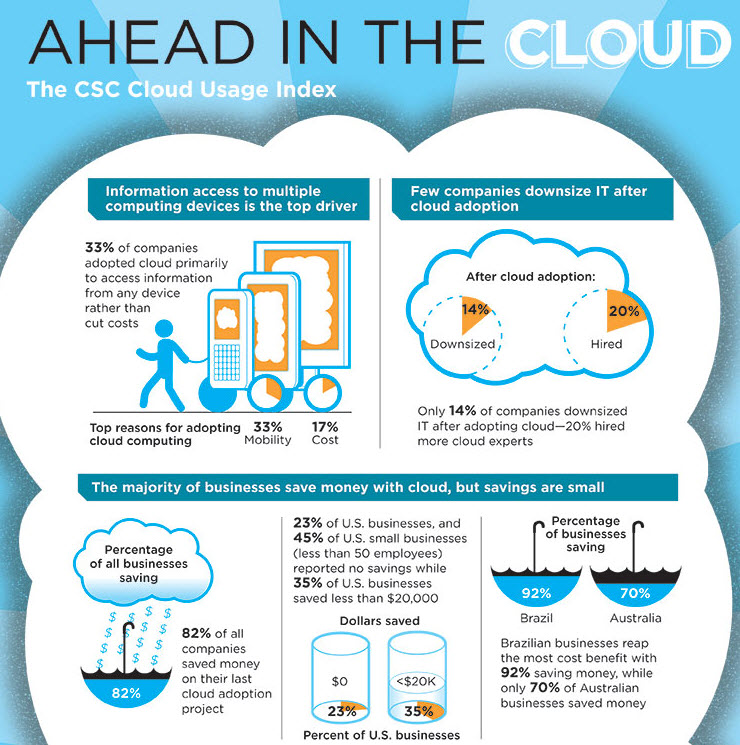 While the cloud tactics being asked about in the survey were more general than PwC’s survey, the conclusion is correlative. Enabling new capabilities, in this case mobile device access, was a significantly more important motivator than merely “reducing costs.” In fact the additional data showing that cost savings were minor, and that more companies hired up rather than downsized their IT departments suggests the “other C-level executives” in the PwC study had a misconception that thought  they could reduce the IT department budget through cloud computing.

So now my narrative was so full of holes it was floundering like a raft made of sticks in class V white water rapids. I had to find a patch quick. So then I found this survey from KPMG that yielded the following graph: 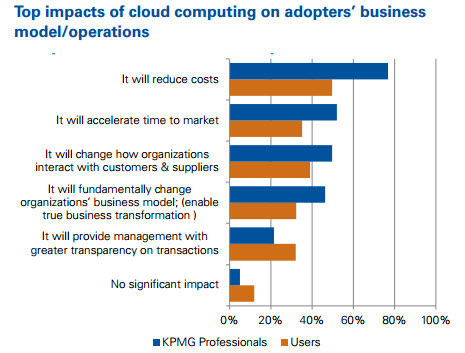 Ah, comfort! Finally some data that supported my point of view!  So I delved further into the KPMG study to get more detail: 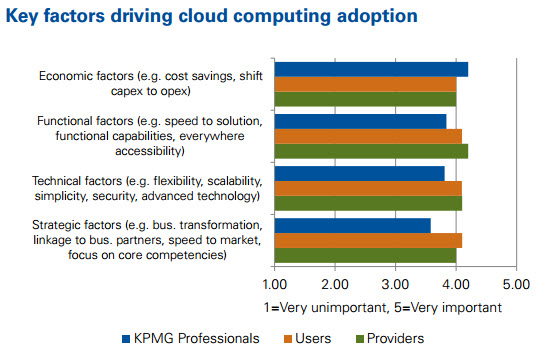 Oh no! So the “User” respondents forecasted that reduced costs would be the largest impact, but economic factors were actually the least important motivation for them to move to the cloud!

The genesis of the now dead narrative

So how did I come up with that apparently mistaken narrative? My perception was a result of many conversations with SAP customers over the last couple of years at conferences such as SAPPHIRE NOW, SAP TechEd, and SAP Insider. In these cases, a number of basis leads had come by asking about capabilities for taking advantage of the cloud from SAP. In most of these cases, these administrators were looking to “reduce costs”. In some cases they, or their bosses, were equating cloud computing with outsourcing and feared that there would be job losses.

So let’s examine some data specifically about these SAP customers.  An Aberdeen paper I saw an HP speaker discuss at the SAP Virtualization and Cloud Week, The Case for Virtualizing your SAP Deployment, had a few relevant findings to share here with regard to cloud technology adoption by SAP customers:

Even more interesting was the following quote:

When you are the administrator responsible for mission critical systems through which 80% – 90% of the company’s revenue and expense transactions flow, it’s very understandable why one would take a conservative approach.

Apparently business users of SAP systems care very much about the deployment method used by IT: 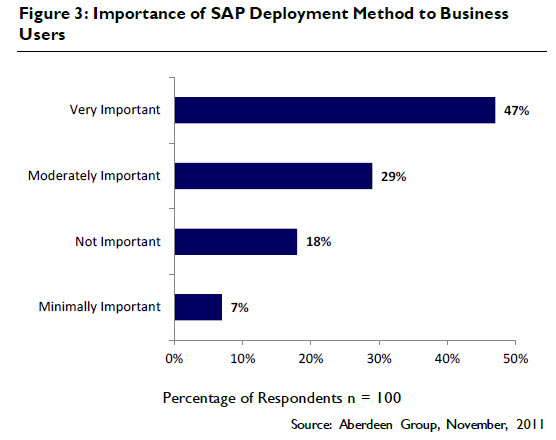 So for SAP folks moving SAP systems to the cloud, is saving on costs theprimary motivator? 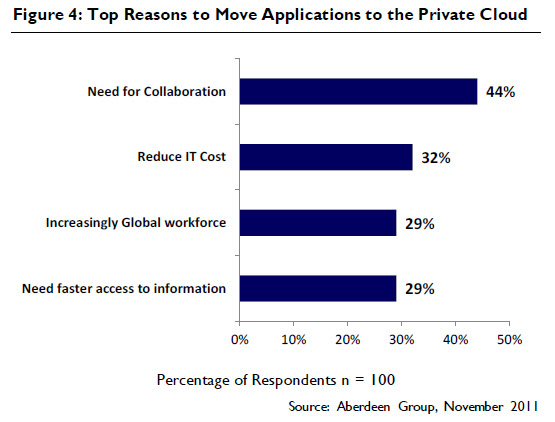 Reducing costs is a distant second, and as data from the other surveys show, the actual IT budget doesn’t decrease, instead more value gets delivered.

My conclusion is that people are starting to understand the higher benefits of cloud computing.  It’s the IT department that’s leading in this increased awareness. Some business managers need educating still. This is not to say that business managers don’t appreciate benefits such as faster delivery. They do, but often in the context of solving a specific business problem now, not thinking about employing agility as a strategic ability.

It’s back to creating a new narrative for this marketing guy who’s been seriously schooled. Hope you can also learn something from my late night of education.

If you have questions about SAP and cloud computing, check out the SCN Cloud Community, follow me on Twitter, or drop me at line at greg dot chase at SAP dot com and I’ll get you connected with someone with the right expertise.

Recently we have had a significant increase enquiries about Cloud / OnDemand from smaller businesses (5 - 20 users) and interestingly the main driver is not lower cost. They simply want the flexibility to work from any location and not have to worry about supporting a Server Architecture.