The month of August is always one of the most popular months for workers to take a vacation, recharge their batteries & prepare for the fall. Although many were out of the office last month, nobody said you can’t bring Facebook to the beach. Here are the top SAP Facebook Posts from the Month of August.

Customer success stories always produce a strong showing on Facebook, but I have to admit, I was somewhat surprised to see over 1300 likes & 300+ shares for this particular video. However, this video is the first that we’ve shared in a series of new, “Run Like Never Before” customer stories, so this may be solid evidence that people really do enjoy hearing what our customers have to say about us.

Then again, perhaps the following quote regarding regarding SAP Mobile solutions, from Tommy Hilfiger CEO Daniel Grieder had something to do with the post’s popularity:

“Without SAP we would never be able to run in the future with the speed we have today.” – Daniel Grieder, CEO, Tommy Hilfiger

At any rate, it’s extremely comforting to see content like this strike a chord with our fans.

I’ve stated before how much I love the SAPfast_facts Initiative and the consistent performance of their content on our social channels is one of the main reasons why. Facts like “SAP’s customers produce 64% of the world’s ice cream” are great tidbits of conversation that show just how broad SAP’s reach actually is. 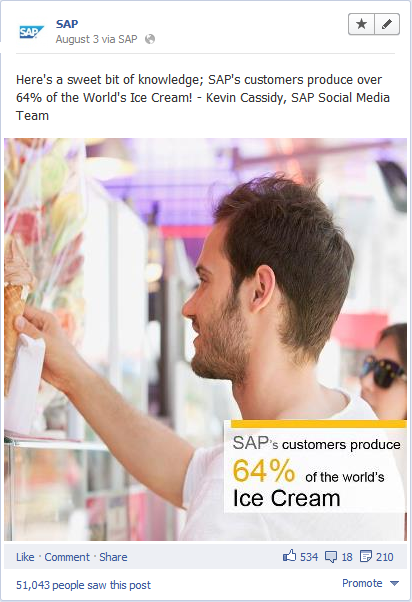 I’m not an expert on Extreme Sailing, in-fact, I wasn’t even sure what made it so different from a regular sailing regatta, but a Twitter Q&A session with the SAP Extreme Sailing team coupled with this amazing photo, sure piqued my interest. And I wasn’t alone. Just as they did during July 2012 (you can read all about it here), the sap_sponsorships team made an impact on Facebook. Plus, what’s not to love about a Twitter chat with some of the coolest athletes on the high seas? 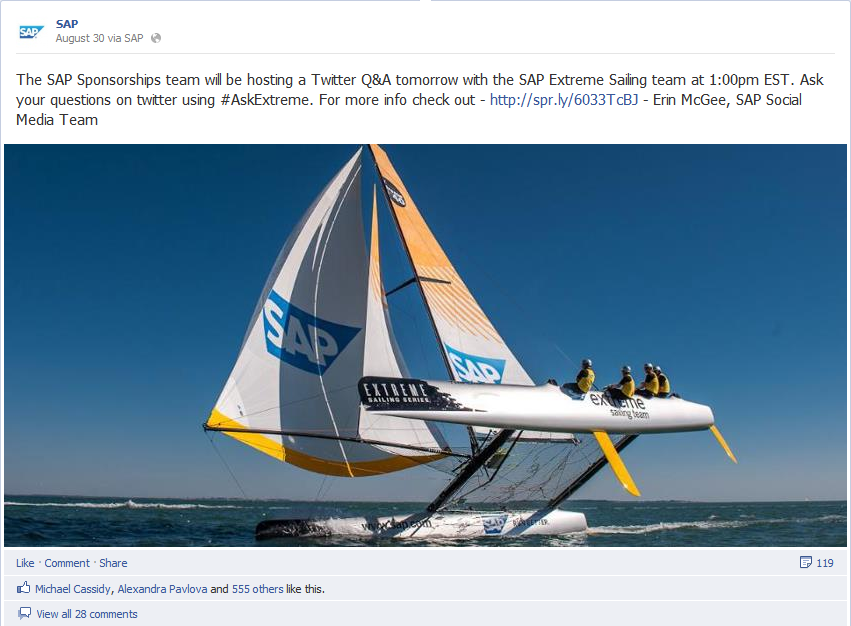 Sometimes there’s no shame in showing off. That’s exactly what we intended to do with this modest photo album highlighting sap_visual_intelligence. We presented users with some interesting data that included references to the ever-popular August Extravaganza, Shark Week as well as the mobile phone market. You can see the photo album for yourself by clicking here. 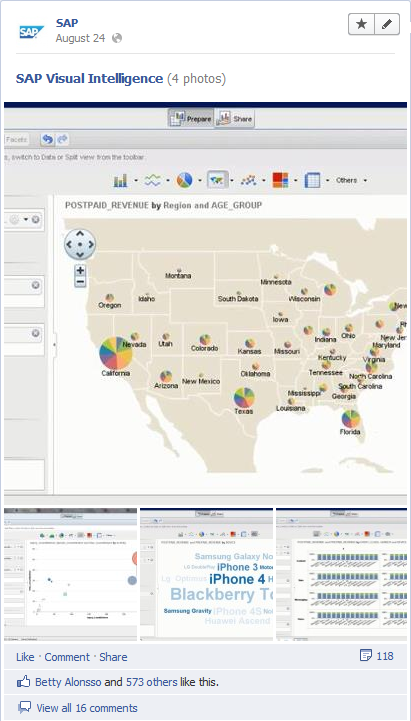 SAP Gets a Gold Medal… Sort of

I believe I just made this point in the previous paragraph, but allow me to reiterate; if you got it, flaunt it. This post was originally meant to highlight how SAP was named an industry leader in “Advanced Data Visualization.” But in order for our users to properly “visualize” how awesome this accolade is, we had to share a screenshot of businessobjects_explorer. It just so happens that this screenshot contained data from the Summer Olympics, which were taking over TV’s worldwide during the first week of August. That does it for the month of August, but make sure to keep visiting the SAP Facebook Page through September. This is when things start heating up. Cya soon!