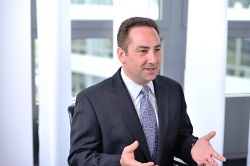 Originally published in the September 24, 2012 issue of FORBES magazine as “Counting What Counts – How Outcome Metrics Have Changed the Game”

You’re likely to see the world differently if you spend a few minutes with Jonathan Becher, SAP’s CMO. To Becher, baseball and Olympic sailing are good analogies for thinking differently about business. Sports teams are never content to rest on their laurels; they are constantly measuring performance to look for ways to improve. Performance management is one of Becher’s passions, and he defines it as how organizations manage their own performance, improve the performance of employees and chart the best future course against the competition and the uncertainties of the marketplace. Performance management is as critical in business as it is in sports.

“Businesses tend to measure the wrong things,” says Becher. “They dwell on ‘activity metrics,’ which are easy to collect,” he says, “as opposed to ‘outcome metrics,’ which monitor impact.” Think of the movie Moneyball, the story of Oakland Athletics’ baseball manager Billy Beane, who, in 2002 and with a limited budget, found a new way to think about a familiar game. Whereas old-school coaches were focused on an activity metric—batting averages, for example—Beane chose to measure and prioritize outcome metrics like on-base percentage.

These new metrics influenced the kind of players the team acquired: less flashy, “average payroll performers,” says Becher. These players had modest batting averages but also possessed a knack for getting on base; a fact that, from an outcome point of view, had more to do with what really counts— winning the game. “The point is,” says Becher, “whatever your situation, you have to run better. In sports or in business, the analogy works.”

Dynamic, outcome-based information may also dramatically change the sport of sailing, according to Becher. SAP technology gave crews in this year’s Olympics three kinds of outcome metrics. Sensors on each boat relayed tactical data to crews, improving performance in real time. During breaks between races, benchmarking analytics allowed crews to quickly compare their race against the decisions of other crews. Predictive analytics can gather weather and tidal data to help crews ready themselves for the next starting gun. For Becher, SAP’s entrance into the sporting world allows the company to “go where people already are,” showcasing what the company does for businesses in a way that makes sense to most people.

“We live in an increasingly data-driven world,” says Becher. “Unlocking the power of data and analytics provides insights and a competitive edge for athletes, coaches and spectators—just as it does in business.”