Matthias Steiner biffed me (is this even a word? Whoops – I  just discovered that this means “Strike someone roughly or sharply, usually with the fist”) me and so I figured I would sit down and whip out a quick blog.

I’m currently a service manager of a corporate Single Sign On service which is similar to the SAP ID service that you just used to login to SCN.

I’ve been collaborating on SCN since 2005 and have been involved in SAP work since 2004 when I started working with the 5.0 version of the SAP Portal. I moved on to developing Java iViews for the 6.0 Enterprise Portal, using the Composition Environment (CE), Guided Procedures and various SAP Cloud offerings. I’ve been a SAP Mentor since 2009. I’ve been blogging on SCN since 2008 (indeed, this blog will be my 160th blog on SCN) and now I focus on SAP’s Cloud strategy. My blogs tend to be a bit long-winded (my longest one so far was 19 pages!)

This actually isn’t as easy as it might seem – since I’m not really sure how I define “my country”.  Although I was born and raised in the Bay Area (close to San Francisco), I moved to Austria over 20 years ago.

I’ve been living in Salzburg ever since. Salzburg is a city in Western Austria and is most famous for being the birthplace of Mozart and the setting for the movie “Sound of Music”. 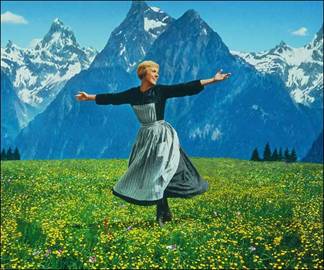 Sound of Music is well known in the States and in other parts of the world but in the Austria the movie is largely unknown. Even I hadn’t seen the movie until two years ago.  There are these elaborate tours for Sound of Music fans in Salzburg but residents usually shaken their heads and have no idea what the fuss is all about.  Since a recent Sound of Music musical in Salzburg was unbelievable successful (it sold out all performances for an entire year), the movie is now more well-known and Salzburg inhabitants can be heard singing Sound of Music songs albeit with German lyrics.

Here is a recent picture of me visiting Hellbrunn castle location of the gazebo where Liesl and Frank sing the “Sixteen Going on Seventeen” song in the Sound of Music movie. Right after this picture was taken, I burst out my rendition of the song causing a minor riot as the tourists scattered.

Who has been your personal hero/role-model in your youth and why did you admire her/him?

During a recent visit in California, I discovered an old scrapbook that I made when I was very young. It contained original newspaper and magazine clippings from the first moon landing.  I also have vague memories of playing with astronaut action figures in my backyard.  In retrospect, it is tough to say why I admired astronauts – perhaps the fact that they were explorers and brave in the face of danger were most important for me.

What made you start actively participating in the community and why would you recommend to people to give it a try?

I initially started participating in SDN forums and then at some point I started blogging. My first blog was in 2006. It was this transition that marked the start of my active participation in the community. Marilyn Pratt sent me an email that called me the “mystery blogger” and much has occurred since that fateful email exchange.

One of main reasons for people to collaborate on SCN is to create a network amongst the SAP community – this is much more important and useful than building your reputation.

What is your favorite conspiracy theory?

Bloggers post innocent questions about conspiracies so that the CIA can judge how much the public knows about their many covert operations. That old trick didn’t fool me.

I’m lucky enough to be able to work part-time. For the last seven years, I have had one day off a week when I can take care of my kids, blog, ski in the winter, run in the summer, etc. I don’t answer my cell phone or answer my emails.   This day off is critical to my work-life balance.

I was a full-time stay-at-home dad for a whole year.  After the birth of my first child, I made the decision to take a year off and take care of my daughter. I went to a bunch of infant classes where I was usually the only father attending.  It was a great learning experience and allowed me to figure out where my priorities should lie.

My parents always did crazy stuff with us (building a fort from telephone poles, making home-made go-carts from old roller skates, etc). That showed me that if you are always serious (as adults usually are), then you miss out on so much joy and wonder in this world. Having your own children makes this playfulness much easier to maintain.

I enjoy blogging on SCN about SAP technology, because I view it as a role-playing game set in a strange land located somewhere between Waldorf, Palo Alto and Bangalore – I follow a new path like a curious child, try to understand what I see and then try and tell others about my explorations.

I’ll ask those next in the chain to answer the following question as well as 3 other questions on Moshe’s original blog.