Thanks Custodio de Oliveira for BIFing* me. As he pointed out in his BIF blog, we worked on the same project but in different locations so I didn’t get to know Custodio as well as I would have liked but that’s why I think all these BIF blogs are so interesting… we find out more about people we have worked with and even people we’d like to work with.

About me
I’m a husband, father and freelance SAP developer living in Wollongong, Australia. Wollongong is a seaside city just an hour south of Sydney and is a fantastic place to live. My beautiful wife and I are a few months shy of our 10th anniversary and we have two daughters, 7 and 5 years old.

I fell into the SAP world about 13 years ago when, after completing a couple of years of part-time university, I gained an IT cadetship with a large Australian mining and (at that time) steel manufacturing company. My cadetship involved part-time work and part-time university study. It was a good deal for me as I gained industry experience before leaving uni, I received a paycheck and they paid for my uni fees from that point onwards. When I turned up on my first day of the cadetship they told me I was in the SAP team… whatever that meant! Fortunately for me, I really enjoyed the database programming subjects at uni and took to ABAP quickly. Like any junior developer I complained about having to “do my time” supporting some of the older SAP systems but now I’m proud to say that I cut my teeth on R/2 programming and even hacked a JCL script or twenty – just don’t ask me to remember how to do it now. Since then, I have been outsourced to a consulting company, done a brief stint of freelance consulting, jumped back to a steel making company that was divested from the company I originally started with and then, very recently, taken a serious step out into the world of freelance consulting. I have to say that, for the moment, I’m really enjoying this change in vocational scenery.

An interesting fact about me
I’m an identical twin. This is a picture of my brother and I, taken a couple of years ago. You can take a guess at which one I am… but my SCN profile picture may give it away. 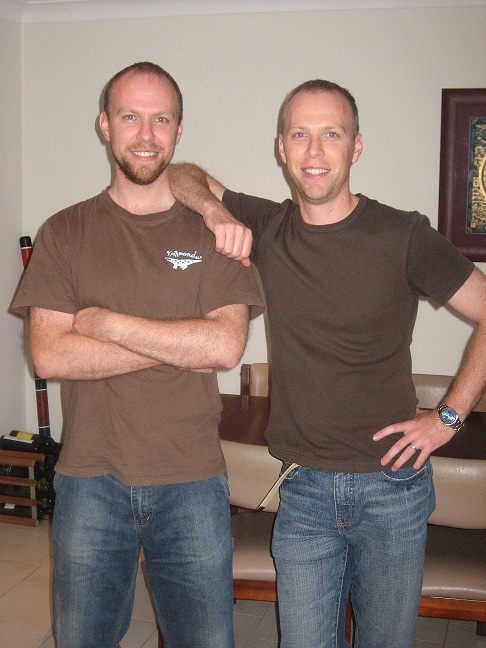 You would think that being identical twins we might have chosen similar career paths but interestingly I’m in the Information Technology industry (obviously!) and he’s in the Health industry – Occupational Therapy to be precise… Or as I like to put it: I’m in I.T. and he’s in O.T.

Name the person who affected you most in your career/ way of thinking and why?
I’ve had a number of people who have significantly helped me during my career but I’m going to take this opportunity to give a public shout-out to John Patterson. I only met him a couple of years ago but John, just by sharing his passions, has really opened my eyes to see the fun that can be had outside the “traditional” SAP technologies. I think that spending a lot of my career as the lead of an in-house development team for a risk-averse company in a location with a small resource pool to draw from (it sounds challenging when I write it all out!) had caused me to steer clear of things that would require new skillsets which could be hard to source. As a result, my own focus was narrowed. But just talking to John about his experiments with Gateway and SAPUI5, not to mention Android and Windows 8, has reignited my excitement for playing with tech just for fun… and now I just have to make time to talk and play more often – though that’s easier said than done! John is a quiet achiever and probably doesn’t get the full recognition he deserves but I know that he is respected by some “heavy hitters” in the SAP development world. I’m humbled to call him a friend and happy to call him a personal mentor, even if he doesn’t know it. Thanks John!

It’s 1972 in Mannheim, Germany. In the room Claus, Dietmar, Hans-Werner, Hasso, Klaus and YOU!  What’s your contribution/role in the company soon to be created?
I’m a developer and I know very little about starting a software company but I would love to have been involved as a software architect back then, knowing what I know now. My number one priority would have been to “separate the concerns” in the code. Forget the fact that the software is running on a mainframe, ignore that client/server fad that’s coming and just concentrate on creating *well defined* interfaces between the persistence, application and presentation code as this will provide the best opportunity to grow and change the software in the future. Oh, and I’d put a stop to BDC programming before it was even invented and instead push for a comprehensive (but still extensible), object-oriented business object framework with flexible, public APIs. I wondering now if that answer is a bit “nerdier” than you were wanting but that’s all I got!

And now I’m going to BIF…

And to get their right-brain working their question is:
Describe something you do differently than most people?