#innojamau: Design thinking our way to fight the bush fires

Mix a handful of techies with a bunch of good technologies, you get an application.

Add Design Thinking to the mix, you get a solution for someone’s problem.

InnoJam is an event where I meet passionate people, exchange ideas, discover the latest toolset from SAP and learn how I can use them to solve problems. A fun packed 30 hour event that I consider as my break/recovery time.

This year I attended InnoJam to get my hands into SAPUI5 and NetWeaver Cloud. What I experienced was an excellent team play where every team member gave out their best, an example of how both technical and non-technical team members could work in cohesion to produce excellent results, how the experience of the seniors could guide the team towards distinguishing the most important tasks to the less important ones and how a small team of focused individuals could incrementally develop a solution in a very limited timeframe using a set of technologies that were relatively new to them.

Trying to build an application with a coding window of 21 hours with a team you haven’t worked with before, using tools you are relatively new to, sounds unreal. But, this closely resembles the pace of the current IT working environments out there. InnoJam is not just for fun, it prepares us to face the real world.

After a brief introduction about the agenda, we were asked to introduce ourselves. The participants with development experience were shuffled around to create the teams.

This shuffling was one of the good things I liked about this InnoJam compared to the other two that I attended before. It created a random mix and also ensured that every team has a good combination of developers and business experts.

We were given an introduction to Design thinking and an overview of the different phases.Until we have participated in all of those phases, we wouldn’t know what we are going to build.

This was the other part that was great about this InnoJam. Instead of participants getting fixated to an idea and start thinking about the solution from the beginning itself, they are going to work through a process to find a problem to work on, based on a given theme.

The theme of this InnoJam was “Fighting bushfires”. A very apt topic given that the event took place in Victoria, which was a victim of disastrous bush fires.

Our research included watching interviews with various people affected by the bushfires and reading articles. Each of our team members researched the content from a different user group perspective. Lynda did her research with the point of view of an NGO (Non-Government Organization), Grahame took the utilities providers, Chris researched the affected civilians, Steve researched about the professionals such as fire fighters and emergency response teams, and I did research into volunteers. 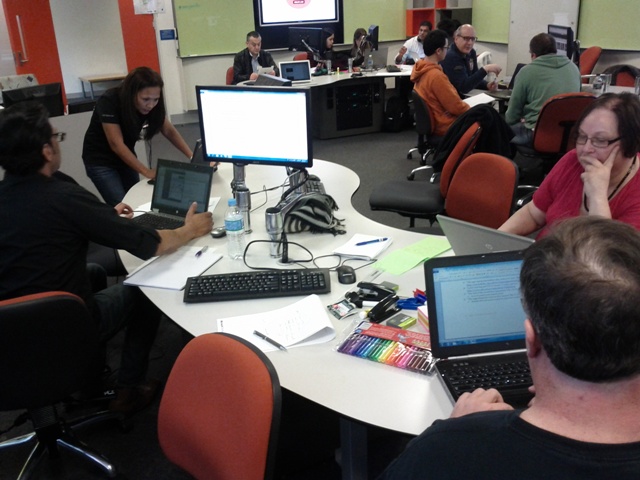 Our team researching and Gigi helping us

Each of our team members took turns to talk about what they heard from the affected people and the research content.While they were speaking, rest of the team started writing down the interesting insights from speaker’s story. These included the victims’ problems, suggestions, issues and opinions. Some of these insights include communications failure, lack of information, poor visibility, no warning, sudden impact and pets under stress. At the end of all stories, we clustered the insights under names such as infrastructure, preparation, information broadcasting, finding routes, medical emergency, putting down the fires .. etc. 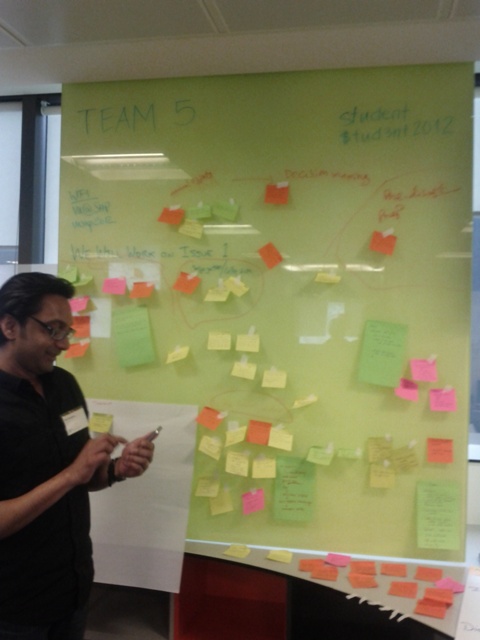 We started discussing about Personas to address. We discussed various ideas such as a fireman, a volunteer, a call centre employee and a civilian. We all agreed to proceed with a civilian persona and hence the persona of Wally was born.

Wally, aged 50, is an accountant who works in Melbourne, lives in Kinglake with his wife, two sons, a daughter and a dog on his big property. He takes pride in his achievements and sees his material possessions as a proof of his success and wants to protect them.

We then gathered insights from this perspective, and wrote down the Point of View (POV) in a sentence “Wally needs a Flexible pit evacuation plan, because of the once in a 100 year event (the big bushfire), he has to stay to defend his property, but ‘defend’ is no longer tenable”. What ever we are going to build, is going to address the above statement.

From this one statement, all of our team members knew about our goal. It also guided us as a Pole star to validate our thinking process to check if we were deviating from the intended goal.

Ideas, quick prototype and feed back

This prototype is just a visual representation of our thoughts about the solution, drawn on paper (some thing like screen mock ups).

Because we don’t have real users to represent our persona, we instead presented our prototypes to other teams and took their feedback and vice versa.

After the TechFire, where the SAP experts presented the technologies, we took a break for dinner. Over the dinner, we discussed individual technical skills and interests, so that we could split the development tasks accordingly. Chris wanted to learn more about NetWeaver Gateway so, he took the oData services development, Steve took the administration console development using PowerBuilder and NetWeaver Gateway, Matt took the UI development using SAPUI5, and I took the historic data display and Google maps integration. The non-coding team members Lynda and Grahame focused on visual aspects of the application, linking the screen flow with our technical framework, content preparation for application notifications and presentation. 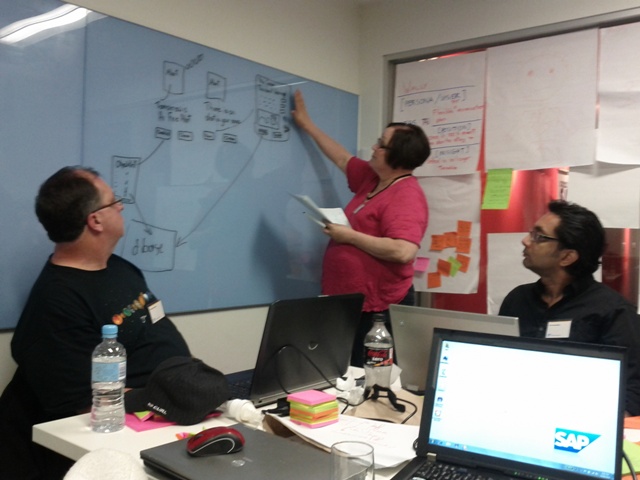 There were many ideas that came into our minds, such as social media integration, navigation instructions and more and more. However, Matt Harding kept on repeating one mantra ‘that feature will be in phase 2’. So, we focused on building an application with limited scope that works, even though it doesn’t have all the bells and whistles.

Matt was able to envision what was possible and what wasn’t within the limited timeframe. I think this is one big factor that helped us to demo a working application. In my previous InnoJam, this is where my team has had difficulty with – embarking on a very ambitious design that left us struggling to show something that works.

We kept coding, failing, learning, laughing, fixing and burning the midnight oil. Despite of Matt’s advice, I still kept on talking about bells and whistles and Matt repeating the mantra ‘next phase’.

In the next few hours that night, I learnt about Google Maps Integration, drawing using SVG, debugging JavaScript (thanks Rui and John) and developing front end using SAP UI5. Finally, at 5am I was able to say that we were in a comfortable position. I managed to build my part of the prototype using SAPUI5 with integrated Google Maps. I was able to read and display data from oData sources and map that to Google Maps. So, whatever may happen in the remaining 10 hours, we have something to demo. Apart from that, as my part of phase 1 was sort of complete, now I can get back to my bells and whistles. I really want to get into the Cloud in the remaining time. I left for the hotel for a power nap and a quick shower, returning in couple of hours. More coding and preparation for presentation

I have to stay away from a personal temptation of working with HANA. As I worked with it during and after the Sydney InnoJam , I decided not to spend much time on HANA. After all, the fun in the InnoJam is about trying out the unexplored toolset.

Once all the hands were back on the deck in the morning, we briefly reviewed where we were at, and continued our work. I left my prototype with Matt and started exploring NetWeaver Cloud. Matthias Braun, very patiently answered my questions about the cloud and helped me put together some web pages on our team’s Cloud VM. He gave me a very good overview about the developments in SAP’s Cloud space and how we could leverage them.

I didn’t involve in the presentation preparation activities at all, trying to do as much as I can with the Cloud, while I got the help of Matthias Braun. I managed to host a little application that shows the nearest evacuation points for Wally. Next step was to read the RSS feeds from CFA website and to map them. However, time is up and I couldn’t complete the RSS feeds integration in Cloud. 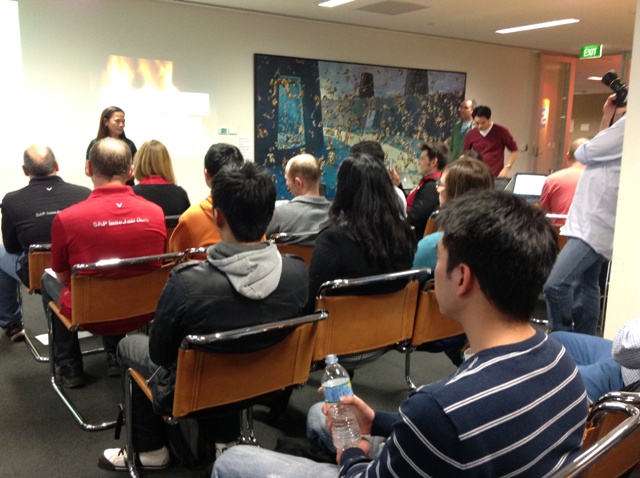 Gigi kicking off the persentations

After many hours of code, sweat and tears 😉 it is time to sit back, relax and listen to the adventures of the teams. It is amazing to see how much each team achieved within the timeframe and how innovative they were with the solutions. The Q and A session at the end of each presentation was very interesting with the participants talking about their thoughts and further possibilities.

Matt and Lynda did an excellent job with our demo and in the end, our team was announced as the Winner of InnoJam Melbourne 2012. 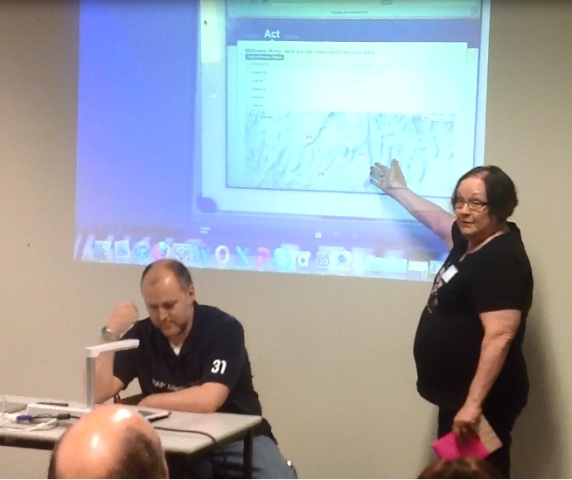 Matt and Lynda presenting the solution 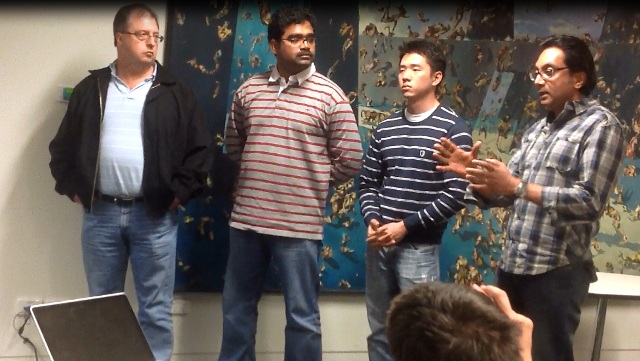 To participate in InnoJam, it costs a couple of hundreds of dollars, loss of sleep for a night and may be loss of pay for a day absent from work. However, that was nowhere comparable to the invaluable experience gained by working along with some of the brilliant brains on the planet. We get that priceless experience at InnoJam.