Last Saturday I received the great honor to be picked by the current member of the month Kumud Singh to make my contribution to the Blog it forward chain. Honestly, I was facinated with the pick-up of this chain letter / blog and never could have guessed that it would turn into such a tremendous avalanche of positive, fun and inspiring blogs. Great job Moshe, and everyone that has taken up the challenge already!

I just happen to like computers, electronics and technology a lot. This was already obvious when I was a kid and spent almost every single wednesday afternoon in the local computer store to play with all the computers that they had there on display. I had the opportunity to play with many types of computers by Sinclair, Acorn, Commodore amongst others. My friend-next-door already had its first ZX spectrum on which we spent night after night keying code from computer magazines into. And when our hands were too tired to continue, we tried to record the hisses and buzzes from a radio show called “Hobbyscoop” on a cassette tape, which you should then try to load into your computer. Most times this resulted into the infamous “Load Error”, but nevertheless always gave us fun to try. Eventually I got my own homecomputer, as Commodore 64, on which I really started buildling programs myself in Basic. On the commodore I actually built my first database application that allowed my father to store all his addresses. Unfortunately, at that time my father wasn’t as interested in computers as he is now and never even considered using it, as the rolodex also perfectly did the job for him.

With IT as part of my DNA, you would probably say that that’s a real good foundation to kick-start an IT career. I had another hobby though, I also loved playing keyboard and ehm.. yup, linking up to my computer at a certain point. That other hobby started with classical organ lessons, but converted during my puberty in a way cooler keyboard, my Yamaha PSR-31. Along with it I bought two large 150W speakers and a amplifier strong enough to power those speakers to their maximum, an ideal combination to terrorise the neighborhood with. Eventually I made up my mind and wanted to go to become musician! 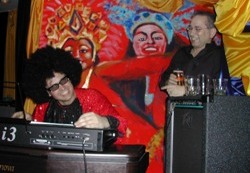 Unfortanately I had an accident that didn’t allow me to play for a long time and unfortunately did damage to my left hand that never completely healed. Because of that, I had decided to give up my musical career and go for second best, something with computers.

Oh, that doesn’t mean I completely eradicated music and playing keyboard from my life, I still do play once a while and when I was living in Singapore (from 2000 – 2006), I really enjoyed playing and performing with the Hollandse Club. Despite little rehearsals, because many of the band members had international positions, we still managed to turn the major Dutch holidays into great parties. 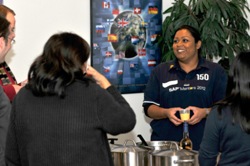 It was in Singapore, where I also got to know @mrspenninkhof, to whom I’m now married for almost 10 years. Many people in or around the Dutch SAP community have met Haseenah at one of the Dutch Inside Tracks where she took care of a perfect Indian style dinner. The noise this resulted in on Twitter even made Kumud Singh, joining though the web-stream from India, wanting to taste the delicacies Haseenah made that day.

Anyway, when I came back to The Netherlands six year ago, I joined Phoqus, an SAP consultant in Healthcare. In my job I mainly focus on development of custom applications in and around R/3. I believe Mobility and cloud applications have a very bright future and are also going to be the foundation of Health 2.0 and e-Heath solutions. For that reason, I am keeping a very close eye on the efforts that SAP makes in this area.

Interesting fact about my country 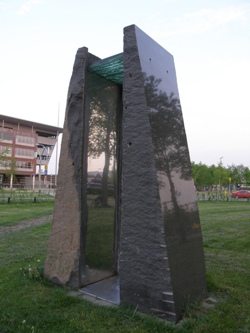 It’s actually a intesting fact about the place where I was born and raised and am now living again; Lelystad. The interesting fact is that it it actually approximately 5 metres (16 ft) below sea level. Lelystad is built on a seabed of the former Zuiderzee. About 6500 years ago this wetland was above high tide level and inhabited. the Netherlands have steadily subsided since. Near Lelystad, the oldest human skeletons in Western Europe were discovered.

Driving through the area, little signages still remind us of the fact of how dangerous the sea was that the Dutch pumped away. These signages indicated that a ship-wreck was found on that location.

A statue in the city center reminds us that we’re living at a very unique location. Between the two pillars, it shows the level of the sea which would have been there if the land wasn’t reclaimed.

1. Latest books you have read and would suggest community members to read as well?

I love to read and especially used to devour books when I was little. From fairytales to westerns, I read everything I could find. For entertainment, I have recently re-read “The Ultimate Hitchhiker’s guide to the Galaxy“, but also read “The Restaurant at the End of the Universe” and “Life, the Universe and Everything“, which I hadn’t read yet. Other books that have been on my nightstand recently are “De eetclub (the dinner club)“, which is very tempting to read from cover to cover in one go, and “Straatvechter (the street lawyer)“, a book that reiterates that there are seriously needy people, also in the so-called 1st world civilized societies.

Another extremely interesting book that I have really submersed myself into is “Please understand me“, which was recommended by Thorsten Franz at the Inside Track NL 2011. Highly recommended if you want to understand what drives your colleagues, customers, boss, but even spouse and children. It explains about the different types of personalities, to understand them, and how to approach them most effectively.

2. Had you not been into software at all, where would you have been?

That’s a really tough question, because I’m really passionate about what I’m doing for a long time.

I really loved leading a team that was taking care of the HP e-Marketing in South East Asia. It involved marketing through web-sites (hp.com), microsites, e-mail campaigns, cleansing customer/prospect data and inventing technology and processes around these tasks. Because my team’s focus was on electronic marketing, my IT background of course helped tremendously. It also helped that I chose marketing to be one of my minors during my study, so that I at least had an idea of what the 4 P’s are (hey, you have no idea how many marketing guys I’ve asked the question about the 4 P’s, that weren’t able to answer).

So I maybe I’m cheating a bit by chosing something that might be a bit close to IT, but I would probably have picked e-marketing.

3. Biggest challenge as a Mentor?

It has been my absolute honor to become part of the SAP Mentor pack and to be part of a group of people that is considered to be the top community influencers of the SAP Ecosystem. I love the dynamics and initiatives in this team and also really appreciate the perks, such as early peeks at new developments and inclusion in Beta programs. I just simply love being close to the fire and drink from the fire hose (as Thorsten once said) of information that comes from SAP.

Seriously, I really can’t think of a challenge that I encountered as a SAP Mentor other than trying to balance time between work, family and real family. Especially the days (or should I say nights) before events such as inside tracks or other presentations are usually quite sleep-deprived. But all these things are fun to do an give me a rewarding lot of energy and I wouldn’t consider that as a “challenge”.

Questions that I would like to pass to them are: